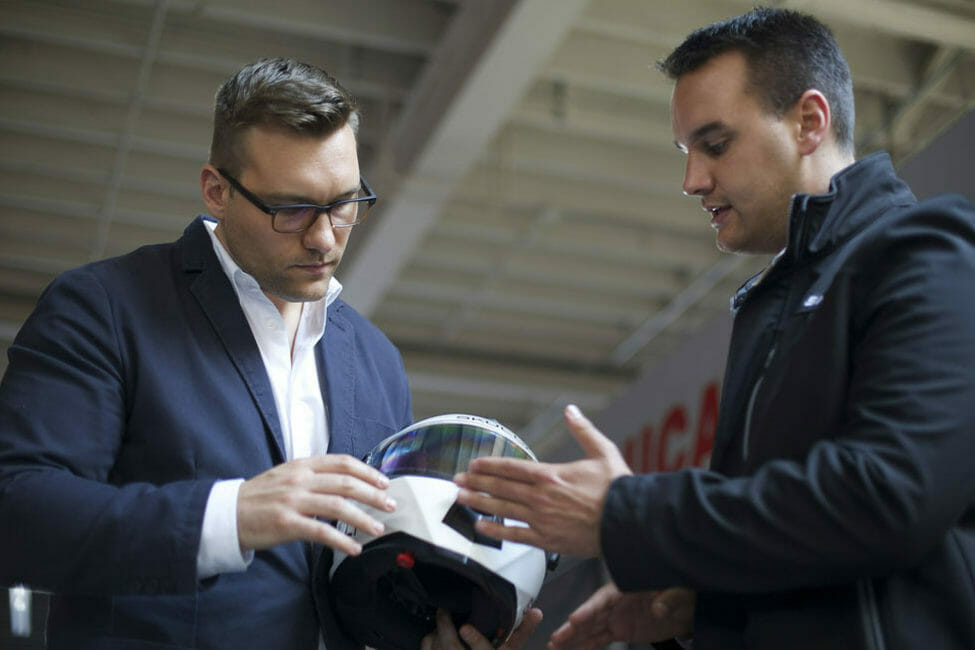 Addicted to Google Glass… Really? You bet. The first case has been reported in the USA and there will be more to follow as Google Glass, and many other smart wearable devices make their way to market.
According to the experts, by 2020, smart wearables – smart contact lenses, eyewear, watches and in-ear audio plugs – will be ubiquitous. Smart phones will be all but obsolete. Smart eyewear will be part of an estimated US$30 billion market affecting the way we communicate, exercise, work and enjoy every moment of our lives… and we’re right at the beginning of this rapidly emerging new world.

Thanks to a seemingly endless marketing budget and a glam brand name, Google’s Glass is by far the best-known smart wearable device currently available. But have a good look around and you’ll find plenty of other brands vying for market attention, proving that developers of smart technology are true believers in its future and the advantages it can bring to our business and personal lives.

The Vuzix M100, is just one of the smart glasses out there. Described as “the world’s first commercially available Smart Glasses”, the M100 comprises an Android-based wearable computer, with a wearable monocular display and computer. It’s been developed “to open new opportunities in industrial, medical, retail, and materials management”. It comes pre-loaded with apps that can be used to record and playback still pictures and video, track timed events, manage calendars, link to the phone and more… and it’s compatible with thousands of existing Android apps as well. Impressively, the M100 received the CES (Consumer Electronics Show) Innovations 2013 Design and Engineering Award Best of Innovations, and was selected as Best Technology in the Wireless Handset Accessory category.

Both the Recon Jet and Oakley Airwave goggle have been developed for the sport/lifestyle market with functionality that includes speed, analytics, navigation, music, filming and communicating with buddies. For keen skiers, Oakley’s traditionally styled goggle comes with a built-in heads up display (HUD) that integrates GPS and Bluetooth. Onboard sensors deliver real-time jump analytics that show distance, height and airtime. With the promise of “crisply presented widescreen graphics; preloaded maps, a music playlist control, and buddy tracking” the company boasts, Airwave isn’t just a goggle, it’s “a mobile dashboard”.

Recon Jet is controlled via a touchpad designed to allow operation in all weather conditions and while wearing gloves.

The Recon Jet heads-up has been purpose developed with endurance athletes in mind. This sleek wrap frame with an unobtrusive HUD has built-in sensors that include GPS, an HD video camera, a microphone, and speakers. A full-colour widescreen display can be configured for different applications.

Preloaded software enables wearers to access their speed/pace, distance, duration, ascent/descent, heart rate, power and cadence. By connecting to their smartphone, they can also see caller ID and SMS alerts while on the go.

Functionality is key, especially with performance based technology, so the Recon Jet is controlled via a touchpad designed to allow operation in all weather conditions and while wearing gloves. Although the Recon Jet does not accept voice commands, it does have a built in microphone and speakers, so it’s equipped for app developers that wish to integrate voice commands into their own app interface. Recon Jet’s pilot model sold out and according to the company’s website, the first production stock will become available in the first quarter of 2015.

Skully Helmets is another wearable smart device designed for sports enthusiasts, this time motorbike riders. The company was established by two brothers, Marcus and Mitchell Weller, who got the project off the ground by crowd-funding via Indiegogo. Theirs was reportedly one of the most successful crowd-funding campaigns in history (to date the brothers have raised almost US$2.5m).1 Marcus, a Ph.D. in Industrial Psychology and a motorcycle fanatic, came up with the idea for a smart helmet following a motorcycle accident.

The US$1,500 helmet has a visor that darkens electronically. Images are projected on a floating display from rear view camera feed with a near 180 degree viewing angle, which means as well as seeing behind them, they can see the left and right blind spots. GPS turn-by-turn directions are also available with all information screened outside the rider’s primary field of view so the road ahead remains unobstructed. Future plans are to show data including speed and fuel levels.

Korea’s Samsung Gear Blink has been designed to go head to head with Google Glass and is expected to launch in the first quarter of 2015, to coincide with Samsung’s Galaxy S6. Although there’s nothing on the website about this new wearable, according to reports, Blink may well include an augmented reality app that turns your hands into a virtual keyboard. Patent images show both one-handed and two-handed variations of this keyboard. Letters on the keyboard correspond with different portions of the wearer’s fingers.

Perhaps less technologically advanced at this point are Pivothead’s video glasses. Essentially a pair of glasses with a built in camera, they enable users to record in video or stills from their glasses with the click of a button, then download the images wirelessly to a desktop or mobile for sharing via a separate device called an Air Sync. The company is currently fundraising on Indiegogo to develop the Pivothead Smart, which will connect with other devices via Bluetooth and have livestreaming.

The common element about all the wearable smart devices described so far is that they are not beautiful to look at. Epiphany Eyewear has seen the opportunity and focussed on a more fashion oriented look. Designed with a modern take on the classic thick-framed style, these smart glasses, with a discreetly positioned camera at the top left of the frame face, were chosen to walk the runway at the highly exclusive New York Fashion Week.

Comparing Epiphany with Google Glass, the company says Glass is “consumer electronics for your face”. Epiphany, they claim, is “great designer glasses, that also contain a computer and some great new powerful features”.

Made from a soft yet strong thermo-polymer the Epiphany frame is described as resistant to breaking, able to keep its shape under extreme conditions, and won’t fade from sun exposure. It is up to 20 per cent lighter than other eyewear materials and, with spring-loaded hinges, fits comfortably to most face shapes and sizes.

Within the frame is a computer with up to 32GB of solid state storage and an HD digital video camera with wide-angle optics, controlled with a single button at the temple. Epiphany is cloud connected, bundled with cross-platform web software and designed to accommodate accessories, including removable, replaceable, ‘electric-powered lenses’ which use smart glass to transition from a light tint for indoors to a darker tint for the outdoors.

Other accessories are Sportiiiis, which provides performance feedback for heart rate, speed, cadence and power via colour LEDs and voice prompts and coming soon is Glance – a detachable smart display for smart-phone and connected web data. According to Epiphany, this will enable users to receive mobile phone calls, texts, and mobile app notifications, get driving directions, watch a quick video and play music.

Cory Grenier, Director of marketing and sales at Epiphany Eyewear told mivision, “Epiphany Eyewear has successfully shipped globally, including Australia… We are currently sold out of current generation inventory. As one of the few premium smart glasses firms to ship product, the demand has been overwhelming!”

Google Glass has struggled to make its futuristic smart glass palatable for the fashion conscious with its initial device looking more like something you’d wear if you were travelling on Star Trek Voyager. Collaborations with several companies are underway to overcome the problem. Eyewear designer Simon Chim from Rochester Optical in the USA has come up with ‘Chimmm for Google Glass’, a collection that balances the space age design of Google Glass against a more conservative yet contemporary frame shape.

“The Google Glass itself is not designed to have frames on – so the difficulty was to make frames to contour to the existing Google brow bar,” Simon told me when I bumped into him at Silmo 2014 in Paris. “We have come up with a system that is very minimal that we can attach to the bar.”

“I have managed to balance (the space-age design of Glass) and to echo the look – to enhance the whole idea of the object on your head without looking so odd. You have to respect the Google design by creating something that blends into the existing design rather than saying this is my sunglass frame that looks stunning on its own.”

Another problem Google has faced with its smart glasses is how to combine prescription lenses with the functionality of a mobile device. People wearing traditional prescription lenses experience optical distortion when they look at the HUD in the the upper right quarter of the Google Glass lens.

Rochester Optical has collaborated with Waterside Laboratories in the UK to develop Smart GOLD (Glasses Optimised Lens designs) lenses, which have an additional optical centre at the point where the HUD is viewed. This eliminates the induced prismatic effect at that point of the lens. According to Rochester and Waterside, the area surrounding this secondary focal point is further optimised to reduce the off axis aberrations associated with the lens’ peripheral optics.

Because the left eye glances up along with the right eye, the left lens also has a compensative zone – which means the brain doesn’t get confused. Even so, wearers of Google Glass are advised to introduce their eyes to HUD technology slowly – 20 minutes at a time – to reduce eye fatigue.

Still not convinced about the future of smart glasses? According to Science Direct, one man has already been hospitalised for Google Glass addiction.2 A published study reported the 31 year-old man had “a history of a mood disorder most consistent with a substance induced hypomania overlaying a depressive disorder, anxiety disorder with characteristics of social phobia and obsessive compulsive disorder, and severe alcohol and tobacco use disorders”.

While being treated at a US Navy’s Substance Abuse and Recovery Program (SARP) for alcohol use disorder, the patient “exhibited significant frustration and irritability related to not being able to use his Google Glass… a notable, nearly involuntary movement of the right hand up to his temple area and tapping it with his forefinger” (reflecting the way in which Google Glass is controlled). He said he felt extremely irritable and argumentative if he was prevented from using his Google Glass.

According to the study, over 35 days in residential care, the patient’s involuntary movements reduced, along with his irritability. His short-term memory improved along with clarity of thought. Intermittent dreams, “as if looking through the device”, continued.

Yes, it’s a new world of wearable technology out there, and all of a sudden, my children’s addictions to their smart phones is paling in significance.