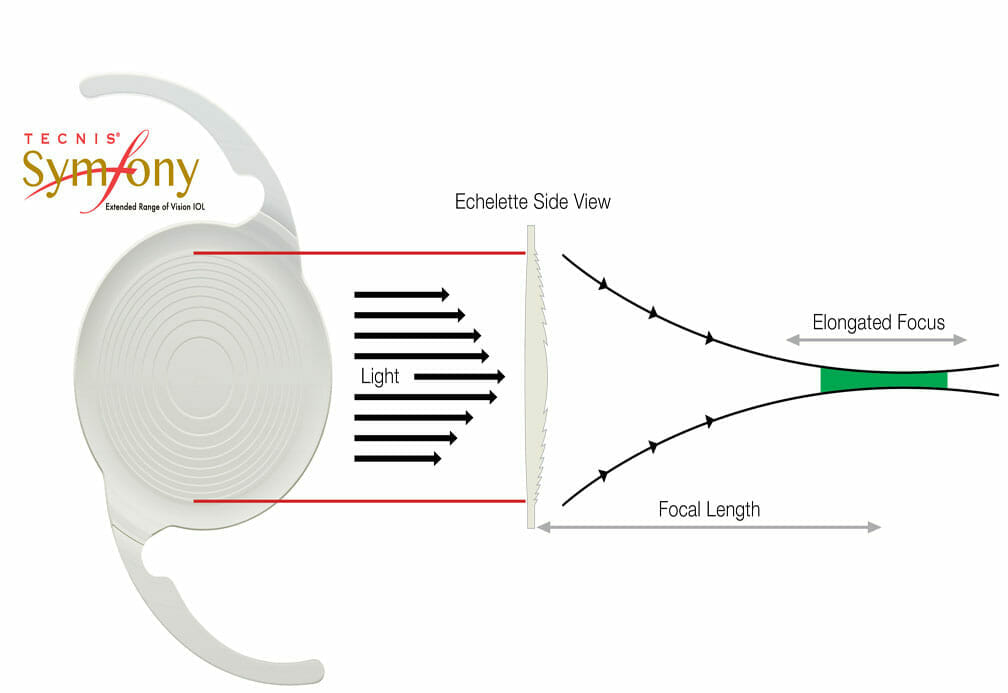 A new intraocular lens, developed by Abbott, offers patients a seamless transition between distance and near vision and almost eliminates debilitating halos and glare at night. Additionally, the Tecnis Symfony Extended Range of Vision IOL is enabling increasing numbers of patients who undergo cataract surgery to read without wearing glasses.

Dr. Donald Collie from Canterbury Eye Specialists in Victoria was asked to trial the lens prior to its official launch.

“I read the results (from previous implants) and discussed the lens with colleagues overseas before taking this on. The lens was extremely interesting. I was excited to see if it performed as I thought it would, and it definitely does,” said Dr. Collie.

Having implanted more than 50 lenses over four months, he said the Tecnis Symfony was almost at the point of being his default lens. “The Symfony benefits from a seamless transition between distance and near so you don’t have to be in a particular spot to get great vision,” said Dr. Collie.

The Tecnis Symfony Extended Range of Vision IOL is designed to be placed in the lens capsule of the eye to replace the natural crystalline lens that has been removed because of a cataract. It is the first and only presbyopia-correcting extended range of vision IOL designed to provide patients increased independence from eyeglasses and quality vision over a continuous range of distance including far, intermediate and near. Additionally, it is designed to increase the distance over which an object appears in focus without sacrificing the patient’s visual clarity or contrast when compared with standard monofocal IOLs that provide improved distance vision only. 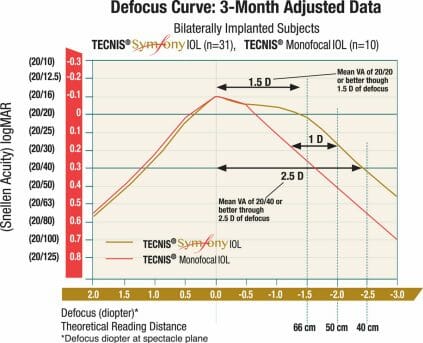 Data presented during RANZCO 2014 demonstrated that subjects who received the lens in both eyes had a clinically significant increased range of vision. 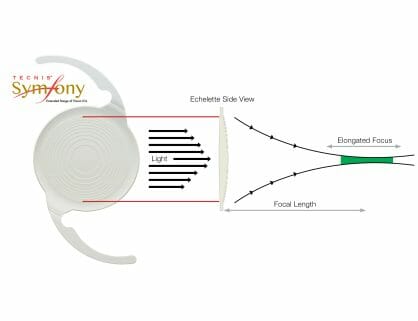 “Pretty much every Tecnis Symfony patient reported no problems with their intermediate vision as opposed to the monofocal patients, so a really important validation of what we see from the quantitative visual data,” said Dr. Murray. “After three months (patients) reported independence of spectacles for different activities, and equally as importantly, (there were) no spontaneous reports of glare or halos… in fact 97 per cent of the Tecnis Symfony IOL patients said they would have the lens implanted again.”

Dr. Collie said the Tecnis Symfony was “an extremely good solution, it represents progress on what has been great – this lens has the advantage of no night time problems – or very few”. He said one of
his patients had experienced glare and halos, “but that will almost certainly have gone within four to six weeks”.

“Eighty-five per cent of my patients with Symfony are pretty much without glasses and 95 per cent would only wear them for a very few activities… However, I do believe patients should be told that they might need glasses for very fine activities, even though it’s likely that they won’t,” said Dr. Collie.