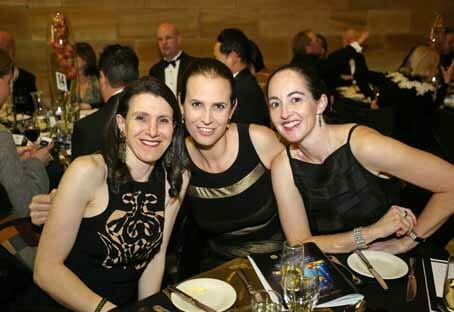 The Save Sight Institute’s 30th Anniversary Gala Dinner saw a veritable ‘who’s who’ of eye health celebrate in style – and raise funds for the current work of the organisation.

The sold-out function, which had the theme ‘Remember the Past, See the Future’, was held at the Great Hall, at the University of Sydney in early September.

MC’d by ABC Sydney radio host, musician and author James Valentine, the evening was packed with entertainment, including singer Rachael Leahcar – a blind woman who was a finalist in the first season of TV show The Voice; and author and newspaper columnist Peter FitzSimons who provided the after-dinner speech.

Guests were also challenged to test themselves with a blind wine tasting provided by Hentley Farm.

Save Sight Institute was established as a not-for-profit organisation in 1985 under the leadership of Emeritus Professor Frank Billson and is now led by Professor Peter McCluskey.

Today the Save Sight Institute incorporates the University of Sydney Discipline of Clinical Ophthalmology and is active in three broad areas – research, teaching and clinical services, all aimed at saving sight.