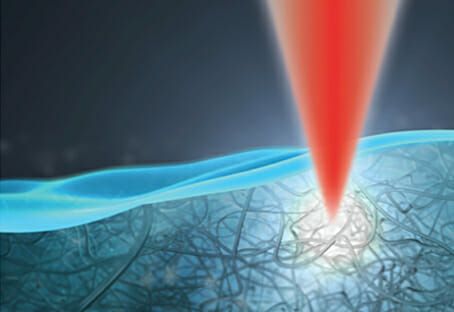 Researchers have developed a new light-based technique to they believe may one day offer improved treatment for keratoconus, which selectively stiffens tissue in the cornea.

The technique, which was detailed in The Optical Society’s journal, Optica, precisely crosslinks the collagen fibres that make up corneal tissue. A specialised microscopy approach measures tissue stiffness without disturbing untreated areas.

“Because light has the ability to probe deep inside tissue, we’re using that property to both go inside and change mechanical properties of tissue and to measure those changes so that we can understand how the tissue changed and visualise it noninvasively,” said Sheldon J.J. Kwok, Massachusetts General Hospital Wellman Center for Photomedicine, first author of the paper.

“Right now, ultraviolet light is used to perform crosslinking across the entire cornea,” said Dr. Seok-Hyun Yun, Massachusetts General Hospital Wellman Center for Photomedicine, leader of the research team. “However, this comes with a risk of damaging the innermost layer of the cornea, a complication that changes the corneal function and can cause it to become very hazy. There is also no way to predict whether the procedure will actually improve vision in a given patient.”

For this reason, the researchers wanted to see if two-photon absorption could be used to precisely control the area of corneal crosslinking. Two-photon absorption uses a near-infrared femtosecond laser to achieve very high spatial resolution confined to a small volume. This approach has been used to harden liquid resins to create microscopic optical components and other 3D structures. Until this research, the technique had not been applied to stiffen tissue, which is initially solid, in a specific area.

Are two photons better than one?

To see if two-photon absorption could indeed induce crosslinking, the researchers used a home-built two-photon microscopy setup that delivers femtosecond Ti:sapphire laser light delivered through the objective lens. They placed a cornea sample under the objective lens, applied a light-sensitive dye to the tissue, and then turned on the laser light and focused it to a specific layer.

After some trial and error, they found that exposing the tissue to 200-milliwatt laser light for 10 minutes induced collagen crosslinking without damaging tissue. By scanning the laser through an area of tissue, the researchers found they could induce crosslinking in a specific 3D area.

“If you can crosslink a specific part of the cornea, it might be possible to optimise the visual outcome,” said Dr. Yun. “With two-photon absorption we can selectively choose and limit the depth of crosslinking to avoid cell damage both on the top and bottom layers of the cornea.”

The study noted that one of the challenges was that crosslinking induced by two-photon absorption is not easily visualised with standard imaging methods. The researchers turned to a specialised technique called Brillouin microscopy, which Dr. Yun’s lab previously developed and has gradually improved. Brillouin microscopy offers a non-contact way to measure 3D biomechanical tissue properties with high spatial resolution.

“We used Brillouin microscopy to validate that we can induce crosslinking in tissue and showed that the amount of crosslinking produced with two-photon adsorption is almost the same as what can be induced with the single-photon approach used today,” said Dr. Yun.

Because the two-photon approach induces crosslinking point by point, it is a lengthy process to perform, making it most useful for crosslinking a small region or a thin slice of tissue.

Although more studies are needed to understand how various patterns of crosslinking affect corneal shape and vision, the researchers hope the new technique could allow crosslinking in a 3D pattern specific to a patient’s corneal bulging to maximise the benefits of the treatment.

They observed that two-photon crosslinking might also be useful for tissue engineering applications, where it could be used to selectively modulate the stiffness of 3D cell cultures to more closely match that of tissue in the body, for example.