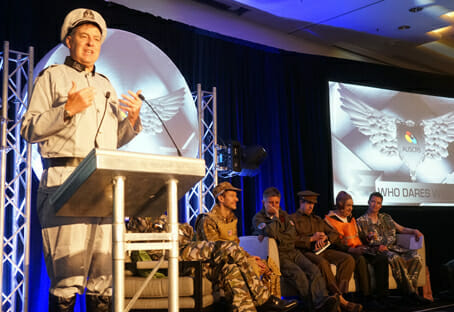 An amazing line up of high profile international speakers and the pick of our local Australian talent were key attractions at AUSCRS 2016 – the premier meeting for the Australian Society of Refractive and Cataract Surgeons. The AUSCRS format works well to break down formality and there were intense and frank discussions around areas of controversy… including which cocktail should be ordered before dinner.

Intraocular lenses – in particular multifocal IOLs – continue to be a hot topic. Dr. Detlev Breyer (Germany) presented his blended vision approach (Duseldorf formula) to the use of different IOLs in each eye, to fill out the range of vision and allow the visual range to be customised to the patients’ needs. He achieved 95 per cent patient satisfaction and asked the question “why are only two to seven per cent of IOLs multifocal when patients like the results so much?”

Australia is fortunate to have access to a wide range of presbyopia correcting IOLs. Dr. Breyer presented data on Oculentis – a non-symmetric segmental refractive IOL – showing good visual performance with minimal unwanted visual phenomena. Dr. Michael Lawless showed early results for Panoptix; Alcons’ trifocal IOL. Visual performance was good but as a diffractive IOL, glare and haloes were still present though seemed less troublesome to the patients. Dr. Damien Gatinel used optical bench testing to demonstrate the focusing mechanism of lenses such as the Fine Vision trifocal IOL (Bausch & Lomb), which had three distinct peaks of focus representing the trifocality, and the Symfony IOL (AMO) which, while performing as an Extended Depth of Focus (EDOF) IOL behaved as a bifocal with two distinct peaks. Dr. Dan Black also studied outcomes with the Symfony EDOF IOL using reading speed to better quantify near vision performance. Patients with the Symfony IOL had reading speeds similar to those achieved by an age-matched group wearing reading glasses.

Dr. John Berdahl… considers glaucoma to be a disorder of axonal transport so that neural death occurs as a result of sustained reduced axonal flow

A pinhole IOL giving EDOF was presented by Dr. Vukich. This lens is used after cataract removal and has the benefit of giving a functional range of vision for near and far without producing unwanted visual phenomena. There was some controversy around the significance or not of reducing the amount of light entering the eye and the concept of dynamic vision was discussed as an important but difficult to measure aspect of visual performance that may be impaired with a reduced aperture IOL.

Dr. Trindade introduced a novel application of reduced aperture optics with a secondary IOL designed for use in patients with highly aberrated corneas to improve quality of vision. This lens uses simple small aperture optics to control entrance pupil size to sharpen visual quality in eyes such as post corneal graft, corneal scars, kerataconus. A clever feature of this lens is its property of being transparent to infra red light so that while it appears as a black annulus with a hole in the middle, it is completely clear under infra-red light, allowing visualisation of the posterior IOL and the complete retina. This lens will be released for commercial use later this year.

There was agreement that for any of these more complex lens designs to be successful, we need to do whatever it takes to get predictable refractive outcomes. Residual refractive error (including astigmatism) after presbyopia correcting IOL implant correlates with reduced satisfaction and visual function. The areas of improvement covered were:

The application of intraoperative aberrometry to get direct measurements for IOL power choice has been elusive and Dr. Findl showed how minimal changes in the operating field such as lid speculum pressure or uneven viscoelastic filling of the anterior chamber can render the measurements useless. At present intraoperative systems such as Ora are able to give accurate toric IOL guidance and sometimes lens power guidance.

One specific take home message from Dr. Findl was that IOL choice for the second eye to be operated should consider the outcome from the first eye. The second eye IOL power should be adjusted by 40 per cent of the refractive error in the first eye.

Dr. John Berdahl gave a fascinating presentation re-evaluating our concepts of glaucoma. He considers glaucoma to be a disorder of axonal transport so that neural death occurs as a result of sustained reduced axonal flow. It ends up being a balance between Intracranial pressure (ICP) and Intraocular pressure (IOP). If ICP falls as happens with age and IOP is elevated there is reduced axonal flow and cell death. He has shown that ICP is low in patients with POAG and normal tension glaucoma.

Dr. Berdahl is involved with the Vision4mars program having developed goggles for astronauts to wear that are designed to regulate the balance between ICP and IOP. Astronauts lose vision and the theory goes that in reduced gravity the Cerebrospinal fluid (CSF) rises up and compresses the lamina cribrosa, pushing it forward like papilloedema. The goggles restore a normal pressure gradient between IOP and ICP.

Dry eye made a small appearance on the program but seemed to pop up in most presentations in the context of successful outcomes with refractive surgery and premium IOL use. An interesting presentation by Dr. Rolando Toyos discussed the place of IPL in dry eye treatment. Intensely pulsed Xenon light applied to the eye lids and periorbital area has a number of mechanisms of action: microbes (such as Demodex) are killed, mitochondria are stimulated, small blood vessels are closed – useful for Rosacea – and meibome is mobilised, treating MGD. He demonstrated a 200 per cent improvement in TBUT and a significant drop in tear osmolality using a treatment every two weeks for eight weeks. A two-treatment regime was proposed for pre-lasik patients.

Laser refractive surgery has in some ways reached a plateau, with LASIK giving excellent predictable results and reports such as the FDA report from 2014 confirming that patient satisfaction is high and the procedure has an excellent safety profile.

A debate comparing LASIK with SMILE (small incision lenticule extraction) and T-PRK (trans epithelial PRK) covered many of the controversies around current laser refractive surgery. Dr. Wolfe presented an evidence based argument supporting LASIK as a proven and robust procedure. LASIK also allows optimisation of the ablation profile and Dr. Eric Donnenfeld made the case that the precision of excimer laser and the development of topography based nomograms (such as Alcon’s Contura system) made LASIK the procedure of choice today.

Dr. Rainer Wiltfang and I spoke to the patient benefits of SMILE. The benefit of less energy into the cornea, no flap, reduced inflammation and dry eye and no risk of flap complications make SMILE a compelling procedure that could surpass LASIK. It was agreed (unusual for a debate) that SMILE is a relatively new procedure and that it will continue to improve with further development of technology and technique.

Drs. Sabban and Singh presented the newer and refined form of trans epithelial photorefractive keratectomy (T-PRK) where the excimer laser is used to remove the epithelium based on a sophisticated epithelial profile nomogram. The benefits of T-PRK are that it is less invasive in terms of corneal stability (having no flap) and is a simple single step procedure for the surgeon to perform. Healing time and patient comfort were shown to be superior to standard PRK.

The (undoubtedly biased) judging panel of Drs. Corbet and Gatienel determined that LASIK was the winner of the debate based on current practice but commented that each of the procedures has a valid application.