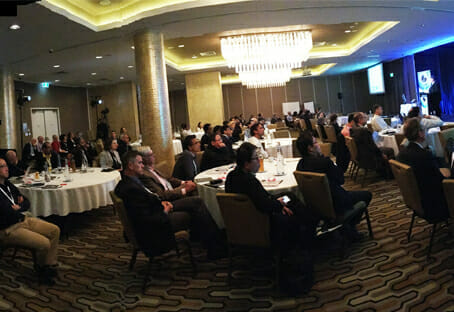 There was no questioning the intellectual horsepower at the third Novartis Future Directions in Ophthalmology symposium in Brisbane. Attended by 100 ophthalmologists from around Australia, the purpose of the meeting was to enhance medical knowledge and the quality use of medicines to help improve patient outcomes.

Current and future directions in the management of ocular disease including medical and surgical retina, diabetic macular oedema (DME), neovascular age related macular degeneration (nvAMD), geographic atrophy (GA) and related pathologies were discussed in detail at the Novartis Future Directions in Ophthalmology conference. Space constraints and the complexity of the subject means we can only cover some general concepts.

The meeting kicked off with a presentation from Professor Robyn Guymer on Current and Future needs of patients with nvAMD. She stated that 250,000 anti-VEGF treatments had been administered in Australia with an average of seven treatments per patient, per year – double the numbers from five years ago. Some are still receiving treatments in their sixth to seventh year and the average age is 80.

Anti-VEGF treatments are reducing blindness by 70 per cent, however about 50 per cent of predicted patients at risk are not getting treatment. We need to do better.

Some of the questions she asked were: Is every hyper-reflective optical coherence tomography (OCT) area really fluid or just a space? The art of understanding relates to image manipulation and other strategies. She asked “can one formalise the methodology for better diagnosis and thus outcomes?”

It’s critical to treat before vision is lost. The starting vision should be around 6/9 or better. Once vision is worse than this, improvements although possible, are unlikely, particularly over the long term.

Robyn spoke about the many signs of early AMD – some subtle, some not so subtle – and said combined anti-VEGF and anti-fibrotic drugs may lead to improved outcomes.

She said our tools must become sensitive enough to pick up early changes before vision loss occurs.

Usha agreed there is great potential to improve on diagnostics, discussing as an example, the measurement of drusen size. AREDS studies showed the five-year risk of advanced AMD progression is based on drusen size. One can use the 125 micron retinal vein diameter as a ‘gauge’ and thus grade 63–125 micron drusen as ‘medium size’. Those under 63 microns are smaller drusen while large drusen are >125microns.

Researchers and clinicians alike are worried about GA developing after anti-VEGF treatment and any data on the link between anti-VEGF and GA is critical to developing revised grading. Grading of AMD lesions in different ways compared to the footprint of atrophy within a lesion may help us. Usha spoke of a study that did not show a relationship between GA and the number of injections, however she said there was a positive correlation with ‘wetness’ of the lesions. Lesions with atrophy had far worse function.

In her second presentation, Advances in Imaging Technology, Usha looked at multimodal imaging, highlighting that multi-colour imaging and ultra wide-field imaging – in addition to regular CFP, wider-field OCT, FAF and so on – should become the standard or care and diagnosis.

Professor Paul Mitchell, who’s research has targeted the epidemiology of eye disease and the application of evidence-based medicine in ophthalmology, presented on Management of DME: lessons learnt and what do we still need to know?

Paul looked at the differences in outcomes comparing grid LASER vs. RETAIN and RESTORE, PRN and treat and extend protocols. He showed that with ranibizumab anti-VEGF treatment, adding LASER at baseline was not beneficial while adding LASER later has, at this juncture, also shown no evidence of benefit.

He said visual gains have been maintained over three years with fixed dose treatment, however individual variations do exist. The problem with fixed dose regimens is they do not allow one to stop treatment, when in fact stopping may be best if things are stable.

On diabetes control, Paul said start treatment straight away, don’t wait… it takes three years from changing blood sugar control to see positive changes but treatment of DME must start as soon as possible and treat monthly until fluid is reduced.

In conclusion, Paul stated that treatment paradigms are maturing and that a PRN, OCT/VA driven inject and extend approach should provide exceptional outcomes. He said the major problem is under-treatment; seven to nine treatments in the first year should be targeted and in the second year, treatment may not be needed if DME is inactive. While some patients do not respond to treatment, one should wait, as it can take up to 12 or even 24 months to see the benefits. There is some evidence of increased risk to vision with grid/focal LASER, especially in those with better starting vision.

Professor Ben Boyd presented on Nanostructured delivery systems: what are the possibilities for treatments of retinal diseases?

Ben specialises in liposomes, which for a contact lens guy like me, was a bit more familiar. His group is looking at targeting site-specific drug delivery for cancers and eye problems. If nine injections per year for DME are the norm, would their technology allow for only one or three administrations?

What if we had a system where one could trigger the insulin release with a handheld pen LASER to activate/release the dose?

He described a passive liposome delivery system, that would reduce the number of administrations while being shown to target specific areas (such as cancer tissues or vessels in nAMD and DME). Instead of the drug being present in its free state, they are held in a liposomal structure akin to a multilayer, tennis-ball-like molecule. Such structures show enhanced permeability and good retention. Liposomes self-assemble and form mesophase structures such as cubosomes and hexosomes, which show different permeability through membranes. They can be ‘switched’ on and off with light or temperature changes, maybe even by magnets

Their potential activation by Laser onto the affected retina could be the trigger, akin to photodynamic therapy with verteporfin.

Although aspects such as safety and patient compliance are being looked at, these modes of IV drug administration appear to be a leap forward when it comes to being patient friendly.

The Importance of Observational Studies

Professor Mark Gillies opened the Sunday sessions with a talk The Importance of Observational Studies. Mark stated that such studies can be taken with a pinch of salt. They often referenced how many letters of vision are gained or lost. Not always of great benefit, they can be open to interpretation and have high dropout rates. Some results are appalling with only one to two letter gains while the visual gains drop back to baseline. Results vary by region.

Among other topics, Mark also discussed PRN vs. treat and extend: Baseline VA is recorded. They showed one line overall improvement in VA with anti-VEGF, although VA declines with time.. Echoing a strong and constant message throughout the conference, Mark showed once again that more treatment seems to provide the best outcome.

Professor Ian McAllister spoke on Retinal Vein Occlusion: Where are we now, and where can we go? He said that as we see in many other interventions, earlier treatment is better. Although those with worse vision may have better VA improvement, these gains can deteriorate over time. Ischaemic and non-ischaemic versions seem to do well, apart from profound vascular ischemia where not much can be done.

As we heard previously from other speakers, anti-VEGF – with or without Laser provided about the same benefit but Laser alone showed less benefit.

Vein bypass studies in CRVO, where retinal veins drain into choroidal circulation was of interest. Some of the data and improvement – visible via imaging – was very impressive. Steroids have a part to play in early treatment of BRVOs but not in the longer term.

Some of Ian’s presentation is embargoed but will be published in due course in a peer-reviewed journal.

Dr. Marc Sarossy Looked at how digital imaging works. Most cameras have a filter that includes filtering of Infra Red (IR), apparently to stop people seeing through clothing!

Marc is part of a team pioneering the development of hyper-spectral imaging (HSI) in ophthalmology. This adds a lot of potential detection capability. In situ retinal spectroscopy will allow us to determine stress and metabolic function of cells. Fine-tuning HSI can also lead to improved detection of abnormal substance deposition, but challenges remain.

The meeting was closed by Dr. Nathan Clunas, PhD, Regional Medical Head Ophthalmology, for Novartis. Nathan said Novartis has 74 new molecules in development, with AU$8.9 billion spent in 2015 on such efforts. They have 137 active clinical medical educational programs in ophthalmology, while R&D employs over 2000 people. Their focus is on innovation, to better meet patient needs.

He thanked the contributors for their excellent presentations on a complex subject, the delegates for their contributions and for giving up their valuable weekend to attend this stimulating, Future Directions meeting.

To their credit the presenters did rather well countering what is after all a rather dry subject for such wet pathology.