Barber Surgery and Ophthalmology: Practising in the 16th Century 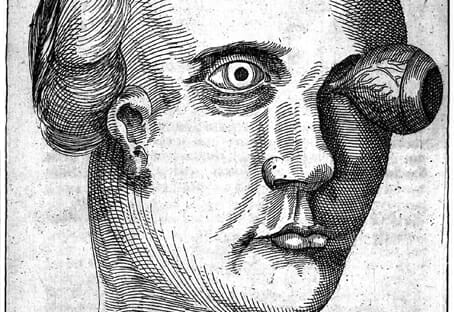 What do needles and threads, spoons, cups and ropes have to do with eye surgery? Nothing unless you happened to have lived in the 16th Century. Ophthalmodoulea: Das ist, Augendienst was the first printed manuscript on ophthalmic disorders and eye surgery, published by George Bartisch (1535 – 1607), and tells the story of how these seemingly domestic products, modified by Bartisch himself, were used to treat eye disease.

There once was a time when the fate of a person’s health was left to barber surgeons, apothecaries, medicine men, healers and even bathhouses. It was a time of superstition, when many believed that astrology, magic and witchcraft played a significant role in the causes of disease. It was already well into the period known as the renaissance in Europe, yet medicine had little progressed from the dark ages.

Georg Bartisch grew up during this time in Gräfenhainichen, a small town in Germany. His family moved to Dresden during his youth and at the age of 13, the impoverished Georg was apprenticed to three barber surgeons.

At that time, the primary role of the barber surgeon was to cut hair – medical treatment was simply a sideline. Cupping and bloodletting were some of the most common medical procedures undertaken by barber surgeons – fortnightly bloodletting was considered to be a strategy for good health. Interestingly, the red and white striped poles, which today remain a familiar indicator of a barber’s presence, come from that time when barber surgeons would hang their bandages out to dry after taking a patient’s blood.

Ophthalmodoulea, Das ist, Augendienst… a work written in vernacular German, providing something that for the first time, local people could read

As an apprentice, Georg’s barber surgeons taught him to treat bladder stones and the practices of dentistry and eye disease. However, it was eye disease that particularly caught his attention and that was the field he chose to pursue.

The Life of a Barber Surgeon

Georg Bartsich, along with his fellow barber surgeons earned their keep by travelling from town to town, following the fairs, where people would line up to have their ailments diagnosed and treated with lotions, potions and treacle made from the barber surgeons’ own recipes.

Georg also fashioned his own equipment, designing spoons that could scoop an eyeball from its socket and clamps to stop the blood from flowing while eyelashes and infected eyelids were removed. He made use of threaded needles to pierce through patients’ globes so that he could pull their eyes forward while undertaking an enucleation. With no anaesthetic available, patients were tied to their chairs to keep them still. Alcohol as a form of anaesthetic was refused because Georg preferred his patients to be awake during surgery and did not want to risk them vomiting either during or after the procedure.

Strict rules were applied to when Georg would perform surgeries, guided by the wax and wane of the moon and signs of the zodiac. He believed the best time for eye surgery was during Libra, Sagittarius and Aquarius, which coincidentally (or conveniently) fell just as the biggest fairs were set up in the major cities. Only emergency surgery was undertaken during the signs of Virgo, Scorpio and Pisces, and women were definitely not to be present while he was operating.

Unlike many of his fellow barber surgeons, Georg had a strong interest in following each patient’s recovery and, rather than move on to the next fair immediately after performing surgery, he chose to spend 12 days in town monitoring their progress. Patients were charged for their procedures according to their prosperity.

Eking out a living as a barber surgeon was a competitive world and Georg often found himself at the back of the fair, missing out on potential business. Determined to improve his reputation and build his practice, he decided to author and publish, from his own funds, a textbook on ophthalmology. Ophthalmodoulea, Das ist, Augendienst (Ophthalmodoulea: Service of the Eyes) was the result; a work written in vernacular German, providing something that for the first time, local people could read (previously, medical texts had only been published in Latin).

The book documented the anatomy of the eye, and in a logical sequence covered various eye diseases (mostly external) and including strabismus, cataract, lacrimal fistula, chalazia, pterygium and trachoma.

Ninety-two woodcuts illustrated the diseases, using a clever technique, of flaps on pages that enabled readers to explore the eye’s anatomy in layers.

Cataract was of particular of interest with six chapters dedicated to the topic, one of which described the six physical causes Georg believed to be responsible for cataract:

Georg dedicated the book to Augustus, the Duke of Saxony and in return the Duke offered to copyright it, which of course prevented it from being copied. Georg later sold a hand coloured copy of his book to the Duke of Saxony who for 25 guineas. This copy was lost in the bombing of Dresden.

Interestingly, Georg was dismissive when the Duke, complaining of poor near sight, invested in gold framed reading spectacles that he had made in Venice. It was Georg’s belief that anything put in front of the eyes would further impair vision. “How could an eye that was already seeing poorly see better when something was placed in front of it,” and “it is much better for a person to preserve two eyes than that a person should have four eyes.”

In his book, Georg cited the following reasons for “dim” vision:

Importantly, Ophthalmodoulea, Das ist, Augendienst achieved its objectives – Georg Bartisch managed to secure well positioned stalls at Fairs, was appointed to the court and was soon seeing more patients, all because of his improved status.

As a historical figure his name is not well known as while his illustrations are renowned the medical care in book is based on superstitions, witchcraft and Galenic medicine not much advanced over the preceding two centuries. For example while Georg Bartisch was able to describe and undertake couching for cataract he failed to understand the role of the lens.

His original books are mostly held by institutions and museums but an English translation in a similar typeface style, with colour illustrations, by Donald Blanchard was published in 1995 and is a worthy addition to any ophthalmic library.