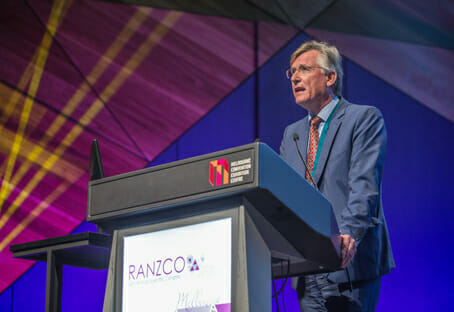 A record number of ophthalmologists from Australia and New Zealand attended the 48th RANZCO Annual Scientific Congress in Melbourne last November, to hear from an A-list of international and Australian speakers.

Among an extraordinary list of speakers to present at RANZCO Congress were Professor Ursula Schmidt-Erfurth, who spoke on the development of novel diagnostic techniques such as retinal imaging, and Prof. Gerard Sutton who delivered the Council Lecture, speaking about how teams working together can deliver better outcomes for patients. Other distinguished names in Australian and New Zealand ophthalmology, included Prof. Hugh Taylor, Prof. Frank Billson, Prof.Peter McCluskey and Associate Prof.Angus Turner.

It was Eduard Zirm who carried out the first human corneal transplantation in 1905. A century later, in 2005, the techniques used for most corneal transplants had only slightly evolved, despite a steady improvement in the majority of ophthalmic surgical techniques.

The last decade has seen a rapid evolution in the way we address corneal surgical problems. In the 2016 RANZCO Council Lecture titled Synergy and Serendipity: Essential Ingredients in Innovative Corneal Therapy, Prof. Gerard Sutton outlined his outlook for the future. This included his view that the species, ‘corneal surgeon’ may well become threatened in the second half of the 21st century.

the species, ‘corneal surgeon’ may well become threatened in the second half of the 21st century

Among several topics, Prof. Sutton explored concepts of bioengineered corneal surgical products, such as 3D printing and the bio-pen. Pre-cut DMAEK tissues are the beginning of such therapies for which the Eye Bank is already able to contribute, making this surgery easier. Prof. Sutton suggested this concept can be taken further in the Australian Ocular Biobank where tissues obtained during different ocular procedures can be reused for other surgical procedures. While this will require a conjoined approach between eye surgeons and eye banks, it will work to the benefit of the patient population at large. Overall, Prof. Sutton felt that eye banks and biobanks would increasingly play a greater role in the delivery of corneal surgery.

A number of incredible medical discoveries that have transformed ophthalmology have been completely serendipitous. Prof. Sutton concluded that while accepting the fruits of serendipity, it is the synergy between the scientist, the surgeon and the eye bank today that will determine how successful these new therapies will become tomorrow.

Hollows Lecture: Cataract and Beyond

Dr. James Muecke AM delivered the Fred Hollows Lecture, sharing personal experiences that have powerfully impacted him and directed his career, ultimately leading to the establishment of Sight For All. This organisation has a legacy in improving eye health in many impoverished countries of Southeast Asia.

Throughout his lecture Dr. Muecke emphasised the role of ophthalmologists in delivering high impact, sustainable solutions that can broadly reduce blindness from many different causes, help alleviate poverty and save lives in some of the world’s poorest countries.

Dr. Muecke talked about his brief contact, as a young ophthalmologist, with the great visionary Fred Hollows. He remembered discussing his desire to be involved in delivering eye care among less privileged people.

He passionately presented his involvement in Myanmar where he found one in 40 adults affected with blindness due to the lack of basic treatment for many eye conditions. At that time, in 2005, only rudimentary cataract surgery services were available. Following cataract surgery, many trained surgeons implanted average power intraocular lenses (IOLs), which gave very average outcomes. Dr. Muecke made them realise the importance of biometry and arranged for equipment, which was paramount in improving visual outcomes.

Dr. Muecke has also trained doctors in his specialty of ocular oncology so they can recognise retinoblastoma. In doing so, he has saved lives in Vietnam and other developing countries in Asia.

Additionally, he has influenced health in Australia. Noticing protruded bellies among young indigenous Australians (and a similar issue in Congo), and realising this was due to a high carbohydrate and low protein diet, he created videos to help Aboriginal communities understand the importance of diabetes and its health consequences.

Among the highlights of RANZCO 2016 was a plenary session at which Prof. Ursula Schmidt-Erfurth of the Vienna Medical University presented her research on the management of diabetic macular oedema. This showed the most important predictor of improvement in visual acuity after six months of intravitreal anti-VEGF therapy was a reduction in intra-retinal fluid volume in the central 3mm of the macula, four weeks after the initial injection. Prof. Schmidt-Erfurth’s research identified that reduction in fluid volume was greatest with aflibercept.

Prof. Keith Martin of Cambridge University described his approach to the management of a failing bleb. He highlighted the importance of intervening early, identifying the site of bleb failure with gonioscopy and he recommended that needling procedures be done in the operating room with anterior chamber infusion.

Dr. Boris Malyugin of the S.Fyodorov Eye Microsurgery Institute in Moscow presented a case series that demonstrated the removal of diseased endothelium (without subsequent transplant) in Fuchs’ endothelial dystrophy at the time of cataract surgery can lead to improvement in visual acuity and corneal thickness three months later. This technique, he suggested, should be considered where no transplant material is available.

Prof. Maarten P. Mourits of Amsterdam concluded the session with his recommendations for when to intervene surgically in orbital cellulitis, including when the orbit is tense, where there is an orbital abscess or if there is deterioration despite 72 hours of intravenous antibiotics.

An International Development workshop, co-hosted by Vision 2020 Australia, focussed on advocacy and the need for ongoing support and education to teach the trainers. This has never been more important than in the present day with Australia’s outreach programs in Vietnam, Laos and Papua New Guinea.

The session featured examples of how advocacy can bring about change and how, even though we work within a small sector of healthcare, eye health has a large enough impact on influencing governments and partnerships to bring about global change and policies that will benefit the entire health sector. The message was a true and simple one: in order to institute change, one needs to embrace the cultures and system of the area in which they work. Co-operating with existing infrastructure is paramount to eliciting changes for the future.

A consortium of younger fellows, older fellows, new graduates and their families gathered in the beautiful Mural Hall at the Myer building to hear Dr. Helen Szoke, CEO of Oxfam International, speak on the role of women in medicine and challenges in achieving gender equality in the workplace. She highlighted that this is not just an issue of developing nations but occurs in affluent society also. Dr. Szoke empowered each of us to be involved in bringing about change in upholding inherent beliefs, to respects all genders and races within our workplaces.

Well-respected Fellows, who have dedicated their time in clinical and research work, were also honoured at the reception. Among them was Prof. Minas Coroneo who was recognised for his work in the field of corneal and external eye disease. An honorary doctorate was also bestowed to a non-RANZCO member for his work linking a non-traditional paring between psychiatry and optics. We look forward to seeing more of his work and involvement in the future.

A total of 40 new graduates were inducted as Fellows of the College and a reception following the ceremony provided the opportunity to warmly thank family and friends who have been an immense support during on the path to graduation. This Awards ceremony was the last presided over by Dr. Bradley Horsburg who handed over the Chain of Office to Associate Prof. Mark Daniell.