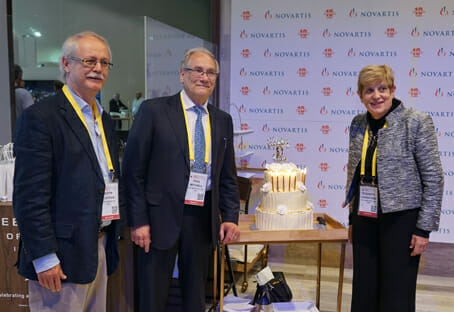 Lucentis, the Novartis anti-VEGF drug used to treat neovascular age-related macular degeneration (nAMD), has now been available in Australia for ten years. During that time, 90,000 patients in Australia with nAMD have been treated with 1.25 million anti-VEGF injections.

Novartis celebrated the ten–year milestone at RANZCO Congress in Perth, where Professor Paul Mitchell congratulated Novartis for introducing Lucentis into Australia, describing it as an ‘extraordinary’ drug.

Prior to approval of Lucentis in Australia, Professor Mitchell had ten patients enrolled in the Anchor trial, a multi-centre, double-masked, phase three trial conducted with patients from countries of the world excluding America (where the MARINA study was conducted). The objective of the trial was to compare patient-reported visual function in those with nAMD treated with ranibizumab or verteporfin photodynamic therapy.

Despite his patients’ treatments being masked, Professor Mitchell said,
‘I knew who was on what because the difference was staggering’

Despite his patients’ treatments being masked, Professor Mitchell said, “I knew who was on what because the difference was staggering”.

Lucentis was made widely available in Australia in 2006 and approved for reimbursement by the Pharmaceutical Board Advisory Committee (PBAC) from August 2007.

“Since then we’ve really had unequalled access to this drug by world standards. In most countries there are impediments.” Professor Mitchell explained that in Australia this occurred for two reasons. “The company put a good application into PBAC and PBAC accepted it straight away, this was a record time for acceptance. Secondly, we had extraordinary advocacy from Macular Disease Foundation Australia (MDFA) at the time; they had multiple meetings with the committee and convinced them there should be essentially very few restrictions.”

Professor Mitchell said Lucentis “has stood the test of time… there are products in the wings being tested in phase three trials, by other companies too. Hopefully the future for this area of disease is very bright.”

He said Australian data leads the world in nAMD but we can’t afford to be complacent.

More Needed for Blind and Vision Impaired, 65 and Over