Connect with:
HomemipatientProvide the Reason for Patients to Return
mipatient
author: Jessica Chi

Provide the Reason for Patients to Return 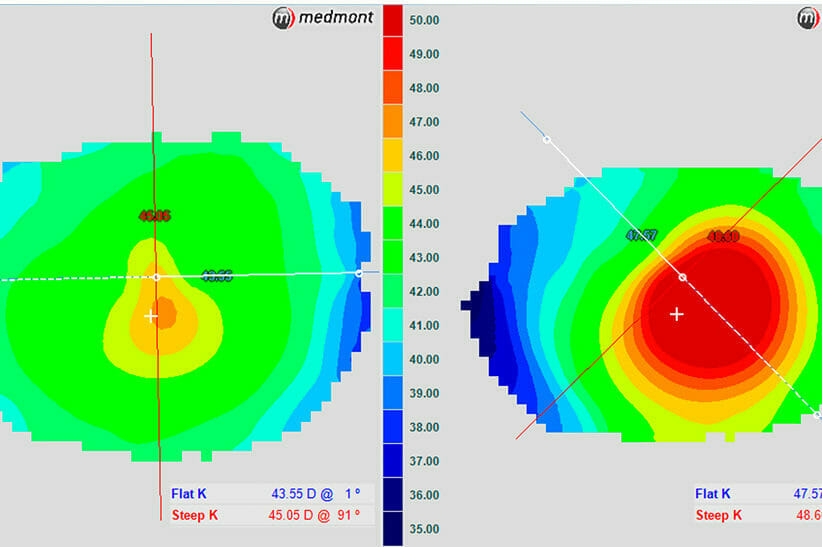 A patient history collected over 26 years provides valuable information about how ocular conditions can evolve, and reminds us how important strong relationships are.

Jason first presented to my practice in 1992 seeking contact lenses for sport, aged 32. He suffered from seasonal allergies but was otherwise in good health.

He was initially prescribed with Barnes Hind Calendar soft contact lenses because they were monthly disposables. Unfortunately, these were only available in spherical powers and contact lens acuity was R 6/5 and L 6/9=.

When Jason returned seeking improved clarity, he was refit into Spectrum lenses, R 8.6/4.0/-3.00 and L 8.9/14.5/-1.00/ -1.75×160. These lenses were planned for three to six monthly replacement, and Jason wore them successfully until 1997, when he was refitted into Focus monthly disposables, which by that time had become available in toric.

There has also been some postulation that keratoconus regresses later in life, which we witnessed with Jason

Jason admitted to eye rubbing due to his itchy eyes, which was caused by ocular allergies. He was strongly advised not to rub his eyes and refitted into rigid gas permeable contact lenses in both eyes for improved clarity. After an initial adaptation period, Jason returned, reporting improved vision in both eyes. However, he had issues with the left lens decentering at times, causing symptoms of ghosting, haloes and flare.

After several adjustments, the fit was improved to reduce the symptoms of ghosting and flare. Jason tolerated these well, however he never completely enjoyed wearing the lenses. He lost a few over the years, and struggled in windy and dusty environments.

In 2011, Jason returned complaining of near vision issues and the strength of the left lens was reduced to correct the left eye to near in a mono-vision arrangement. This arrangement worked brilliantly for him.

I prescribed Jason soft daily disposable contact lenses for swimming and he returned a week later reporting dramatically improved comfort with the soft contact lenses, and moreover, improved vision compared to the rigid lenses, because he no longer experienced the symptoms of glare and shadowing. He had not noticed a dramatic reduction in acuity despite his keratoconus, except that his near vision was not as good, because both eyes had been corrected for distance. I reduced the strength of the left contact lens to allow for clearer near vision and Jason left my practice ecstatic with the result.

Four years later, Jason continues to do brilliantly with his daily disposable contact lenses. He rides a motorbike and is very active, competing in triathlons. He visits annually, and we see his wife, two sons, and he refers family and friends.

Keratoconus is a non-inflammatory, progressive condition which results in corneal thinning and ectasia. Keratoconus is normally bilateral but asymmetric, and typically manifests in the late teens or early adulthood. The aetiology is uncertain, however it is considered to be multifactorial – with genetic, biochemical, environmental and behavioural factors. Ocular allergies and eye rubbing have been associated with the pathogenesis of keratoconus,2 and as such, patients must be counselled about the importance of avoiding eye rubbing. Every keratoconic patient in my practice is asked about eye rubbing, and reminded at future examinations, that this is the only patient modifiable risk factor that can prevent progression.

Keratoconus is a non-inflammatory, progressive condition, which results in corneal thinning and ectasia

Mild forms of keratoconus are often undiagnosed, and can easily be mistaken for regular astigmatism, as was the case for Jason. In the early stages, the signs are much less obvious – corneal thinning and other signs, such as Vogt’s limbal lines and Fleischer’s ring, usually only becoming evident as the disease becomes more advanced. Spectacles and soft contact lenses are useful in these early stages, particularly when some degree of hyperopia and myopia co-exist. However, as the disease becomes more pronounced and the level of irregularity increases, rigid contact lenses are required to correct the irregularity.

Keratoconus tends to progress until the third to fourth decade of life, and tends to cease progression by the late to mid-30s.3 This is a result of natural cross-linking between the corneal collagen fibrils, causing the cornea to harden. There has also been some postulation that keratoconus regresses later in life, resulting in a reduction in spectacle astigmatism, and improvement in spectacle and soft contact lens acuity. We witnessed this with Jason, and as a result, we were able to refit him into soft contact lenses. 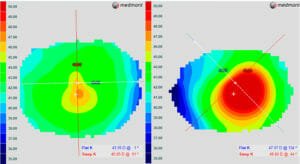 I was fortunate enough to purchase a practice from someone who had maintained a current knowledge of the latest contact lenses.

Today, many optometrists complain that patients shop around for their eye care, and are no longer loyal nor value their eye care practitioner. Commonly, these optometrists perceive that contact lenses are a waste of time as patients are likely to be lost to internet purchase. Loyalty should never be assumed, it needs to be earnt.

Jason is loyal to this practice, and only purchases his contact lenses from us because he knows we have always recommended the best solution for him. The correct solution for Jason however was, and is always evolving depending on his needs and on innovations in the field. It was not unusual for him to be upgraded or have his management modified at many of his visits. Patients like these will recognise and appreciate the level of expertise that we, as optometrists, can provide.

This case reminds us of how important it is to individualise patient care and build relationships. My mantra for practice is that even though I have many patients, I want to be my patient’s only optometrist. To ensure this, I have to make them feel like they are my only patient.

We have to keep innovating – we can’t sit back and hope patients come back – we need to give them a reason to come back.

It was lovely to read through Jason’s history at the practice – a history that spans 26 years. Twenty six – and counting.