Sydney ophthalmologist, Associate Professor Chandra Bala, has successfully performed the first corneal transplantation of its kind in the world, signalling a major breakthrough for eye surgeons. 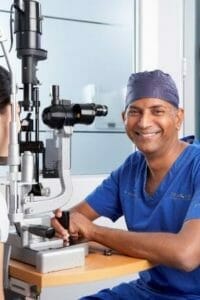 A/Prof. Chandra Bala is a Director of Surgery at PersonalEYES, a network of corrective eye surgery clinics across new South Wales and Canberra.

In a clinical trial on five patients at Macquarie University, where he is a senior clinical lecturer, Dr. Bala has pioneered the use of a key-hole shaped corneal punch – in place of the circular tube – to perform corneal transplantation procedures. The surgery – funded by PersonalEYES – successfully restored vision to four Australian patients.

A/Prof. Bala is gaining international attention for his revised design of the corneal punch – which could change a device that has remained unchanged for more than 30 years.

“The old grafting technique was difficult, as the 20-50-micron tissue around the cornea is so fragile that touching it will destroy it. As a result, the vast majority of cornea specialists don’t perform the surgery, despite the superior outcome for the patient,” explained A/Prof. Bala.

“However, we’ve designed a device that has made an otherwise complex procedure quite simple. The key hole-shaped punch is a very fine instrument that can only transfer thin amounts of tissue at a time, with a tail to control it. The concept behind it is that you only replace what you need.”

He said the innovation is ground-breaking, as well as cost-effective, which means any surgeon globally can implement the procedure at no extra expense.

“Our innovation has changed the way we think about this surgery. It brings control and certainty to the surgeon that they can successfully perform a procedure to restore vision to people who could not see.”

For Sydney woman Bev Carlyon, 66, life took a sudden turn when she lost vision in her left eye after getting off a flight from the United States five and a half years ago. Ms. Carylon had undetected pressure inside her left eye, leaving her with a condition called glaucoma, in which the nerve connecting the eye to the brain is damaged.

After a number of procedures – and the insertion of a Baerveldt Tube to manage the pressure in her eye – Ms. Carlyon’s left cornea died. She has since undergone four corneal grafts, but each time her vision would only be partially restored, before she would lose her sight in the eye completely. She had been blind in her left eye for three months when she was referred to Professor Bala in May, to undergo surgery for corneal transplantation.

Ms. Carlyon said until A/Prof. Bala performed his surgery – which she described as “life-changing” – she had forgotten how different it was to view the world through both eyes.

“I wasn’t sure if the surgery would work 100 per cent, but the choices I had left if I didn’t try were just not palatable to me. This surgery was much easier and less invasive than the old technique, and now I’ve got the best sight I’ve had in almost six years – and can also drive!

“The professional and optimistic approach of my ophthalmic team kept up my spirits, and I cannot thank Dr. Bala enough for never giving up on me, despite the challenges my eye presented to him.”

For the humble doctor, this new approach to corneal transplantation is all about benefiting patients. When asked if this has been the greatest achievement of his career, A/Prof. Bala replied: “It has been the simplest achievement.”