Connect with:
HomemipatientProtect Yourself: The Risk of Medico-legal Claims
mipatient
author: Margaret Lam

Protect Yourself: The Risk of Medico-legal Claims 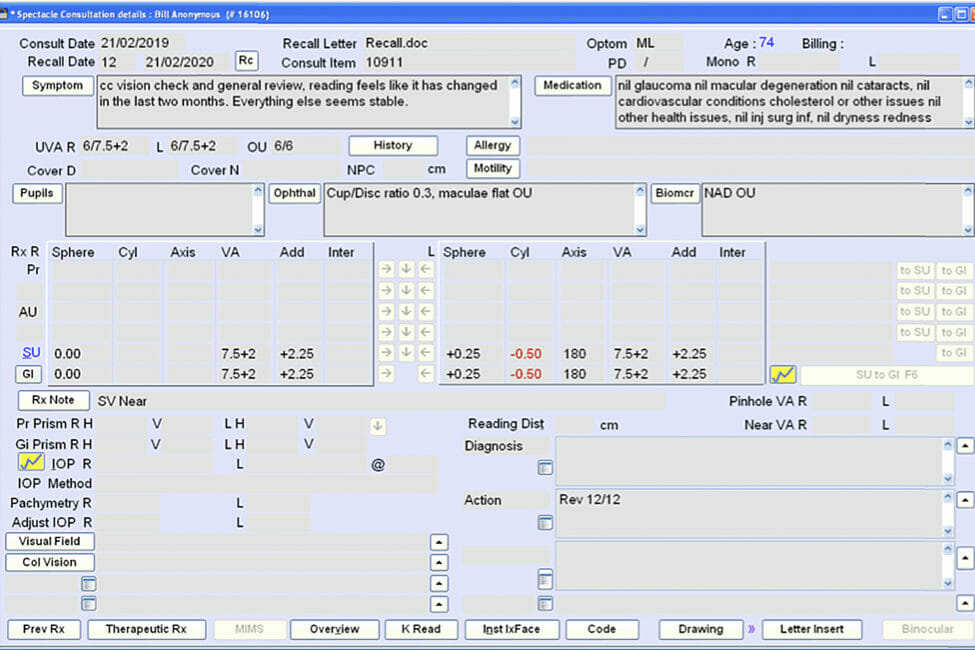 Taking extra care with patient communication and record keeping is likely to save you from patient medico-legal action.

At some point in your career, it is likely that a patient will accuse you of malpractice. This could be due to a simple miscommunication, a misunderstanding, or in some instances, a misdiagnosis and/or improper care.

Many accusations of malpractice are preventable with accurate record keeping of the consultation performed. Yet often we don’t take time to write down everything we have done for a patient. And, being good optometrists, we believe we’ve looked after our patients, communicated well… and we have the mindset that, “it just won’t happen to me”.

Protect yourself! It can and does happen to anyone.

But more than this, accurate record keeping is fundamental to the protection of the optometrist in the event of an accusation of negligence. If this occurs, the patient record is considered legal documentation that provides evidence of the adequacy, or otherwise, of service provision.

As Luke Arundel, Chief Clinical Officer for Optometry Australia explains, two optometrists may have performed exactly the same examination for the patient. One records the consultation more carefully and avoids any disciplinary action from the Australian Health Practitioner Regulation Agency (AHPRA). The other faces disciplinary action because of failure to diagnose, as their records cannot prove they examined the patient for the condition. As you can see, the outcome is very dependent on record keeping.

If there is an accusation of malpractice from a patient, your records will be subpoenaed in legal proceedings. They must meet reasonable standards of record keeping and form the basis of your defence. If a matter of this nature goes before AHPRA, shorthand that is not in common usage will be viewed as unsatisfactory. Even if you are a sole practitioner, you must record tests and examinations in detail, in the patient record, as evidence of your patient care.

A patient record must be accurate, up to date and contain legible information…

An empty field in a record card or electronic records does not mean, “I checked and didn’t find anything, so I left it blank”. In AHPRA’s eyes, a blank field means the test was not performed, and puts you in a vulnerable position for your defence against accusations.

CASE STUDY: BILL AND HIS CATARACTS*

Bill, in his 70s, had been seeing his optometrist Julie, for eight years. Over time, he had referred his grown children to her, and she had become his family’s optometrist. At his last visit, things were relatively normal. Bill was advised to change his reading specs. His vision was observed to correct to 6/6. Nuclear changes in his eyes were also noted.

About a year later, Bill saw his local GP about a red eye. Concerned, his GP referred him to see an ophthalmologist who diagnosed, then managed, a mild bacterial conjunctivitis. The ophthalmologist also advised Bill that he had significant cataracts requiring surgery.

Bill was shocked – he did not believe Julie had previously diagnosed cataracts. He had surgery the following week, then returned to Julie to complain. Soon after, she received a letter from Bill’s solicitor, alleging failure to diagnose cataracts, and in addition, was informed that he had reported her to AHPRA. Julie called Luke Arundel from Optometry Australia for advice.

Figure 1 and Figure 2 demonstrate two different approaches to maintaining records for patients like Bill. While Luke says both records can be used to fight a case like this, the records of Figure 2 would have made the case eminently more defendable. 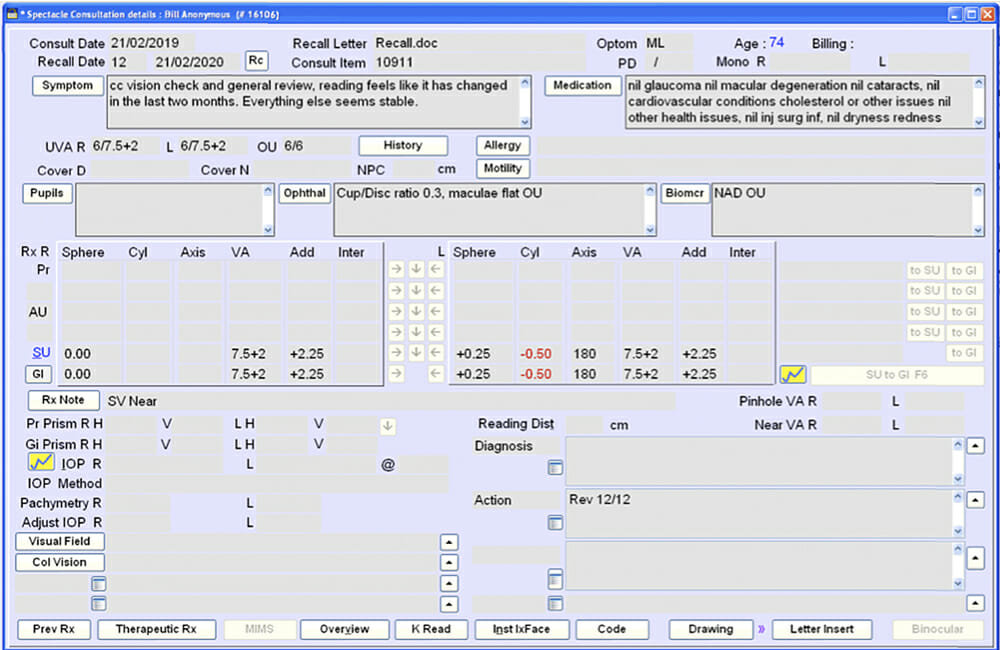 Figure 2 provides compelling evidence to AHPRA that a comprehensive test was performed. Findings are explained objectively and in detail. Notes, taken at the time of the consultation, describe discussion of the results with the patient, and advice provided for action should change occur. With notes like these, the optometrist may never have received contact from AHPRA. 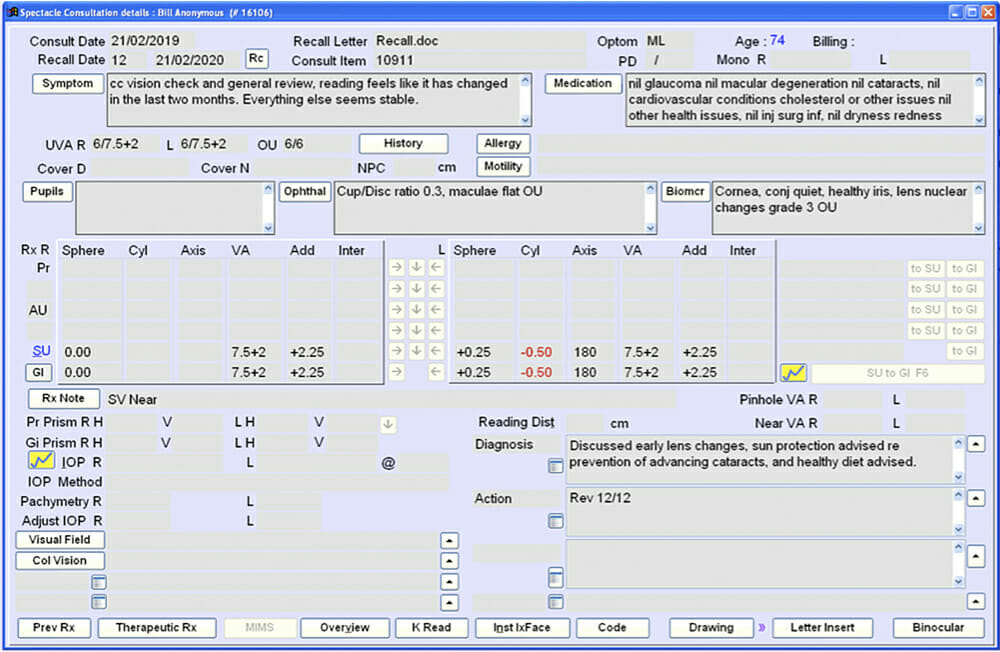 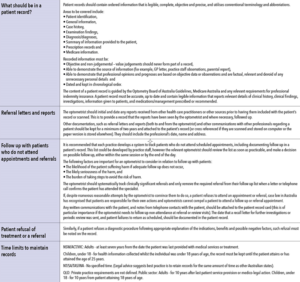 Additionally, tips and guidance in this important area is available for all Optometry Australia members through the “Protection while practising” online webinar, available at http://www.optometry. org.au/for-optometrists/professionalpractice/ cpd-resources/

Margaret Lam practises full scope optometry, and has a passionate interest in contact lenses, retail aspects of optometry, and successful patient communication and management. She has extensive experience in specialty contact lens fitting in corneal ectasia, keratoconus and orthokeratology, and is a past recipient of the Neville Fulthorpe Award for Clinical Excellence.

Margaret is currently the National President of the Cornea and Contact Lens Society of Australia and teaches at the School of Optometry at UNSW as an Adjunct Senior Lecturer. She works as the Head of Optometry Services for George and Matilda Eyecare. Margaret writes ‘mipatient’ on alternate months with Jessica Chi.