What do you call the largest annual conference of optometrists and vision scientists in the world? An event which welcomes delegates from 75 countries, with representation from all continents? And a meeting which shortly will be celebrating its centenary?

The American Academy of Optometry and the World Council of Optometry (WCO) recently collaborated to stage Academy 2019 Orlando and the 3rd World Congress of Optometry, an impressive five-day conference for optometrists, vision scientists, ophthalmologists and optometry students. I, like the 50 other optometrists from Australasia, flew halfway around the globe to attend Academy 19.

The American Academy of Optometry (AAO), an international professional association for optometrists and vision scientists, was founded in 1922. Its mission is to enhance and inspire excellence in eye care through education and lifelong learning. As the scope of optometry constantly changes, the Academy’s goal is to provide high quality continuing education, the centrepiece being this annual meeting. This year there were over 450 hours of lectures and workshops, symposia, scientific lectures and poster presentations, providing a diverse selection of relevant education on the latest practises and ground-breaking research.

The meeting of the Academy in Orlando, Florida attracted over 6,000 delegates from North America alone, as well as others from countries as diverse as Ecuador, Andorra and Botswana. It was an event unlike anything in Australasia, by virtue of its scale. Multiple presentations were held simultaneously, with each session chosen depending on the individual interests of delegates and relevance to their mode of practice. The education programme was displayed in several formats, one of the most useful being the Academy.19 app, which detailed all of the sessions, with synopses of each. The app also provided a facility to bookmark the presentations, along with their locations in the Orange County Convention Centre. Despite the size of the Centre (nearly twenty hectares), the maps made it easy to navigate from one room or hall to the next. Day one kicked off with the large plenary session, detailing the recently released World Health Organisation (WHO) World Report on Vision and the opportunities for optometry to make a substantive difference to world eye health. Drs Alarcos Cieza, Sandra Block and Kovin Naidoo spoke of the 2.2 billion members of the global population with vision impairment or blindness, of which at least one million are uncorrected. The primary causes of this are unaddressed refractive error and presbyopia. The burden of vision impairment is not borne equally – those living in rural areas, those with low incomes, women, the elderly and indigenous populations are more likely to be affected.

The report highlighted significant issues with the availability, accessibility and affordability of eye care. Eye care must therefore be made an integral part of universal health coverage, with a call to action for optometrists as primary eye health care providers. The President of the Academy, Barbara Caffery OD, charged the crowd, “The Academy exists to inspire you to use your excellence to contribute to the resolution of these problems”.

A DIVERSITY OF THEMES

In the process of acquiring 40 hours of CPD, I attended exceptional presentations on subjects as diverse as media use and vision in children, myopia control, optic neuropathies, peripheral retinal disease, corneal transplants, lab work, binocular disorders, evolution of IOL technology and cranial nerve palsies. A snapshot of additional presentations is detailed below. 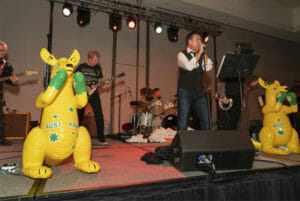 An organised approach to the patient with acute vision loss and transient visual obscurations gave presenters James Fanelli OD, Leonard Messner OD and Lorraine Lombardi PhD, the challenge of covering a significant body of information in a two-hour period. This they did in a fast-paced, engaging presentation, which started with the anatomy. From anatomy they moved adeptly to a wide range of neurological presentations and pathologies. Did you know that 24% of patients with central retinal artery occlusion have evidence of acute ischaemic stroke? Or that 50% of all strokes occur within 48 hours of resolution of transient ischaemic attack symptoms?

Dr Freddo’s lecture was not only a good refresh of retinal anatomy and pathology, but also presented the latest information regarding systemic conditions and adverse reactions to medications which can present in the retina. Cotton wool spots can point us in the direction of hypertension, diabetes, collagen vascular disease, hyperviscosity and hypercoagulability, and HIV to name some. Roth spots were also discussed in terms of their associations with anaemia, leukaemia, shaken baby syndrome, collagen, vascular disease and sepsis, again to name some. Drusen, disc drusen, microaneurysms and hard exudates were also discussed, from perspectives of pathophysiology, diagnosis and management.

A highlight of day three was the two hour What’s new and what’s next in glaucoma, presented by Murray Fingeret OD. Dr Fingeret has lectured in glaucoma in the ocular therapeutics course at UNSW and is thus familiar to many in Australia. Like other speakers at the Academy meeting, he is respected internationally, both as a clinician and presenter at conferences. So, what’s new and what’s next? Artificial intelligence applications to the world of glaucoma, 24-hour intraocular pressure (IOP) monitoring, innovative medications, new drug delivery devices, and the potential benefits of meditation, exercise and diet for IOP lowering were just some of the areas canvassed. 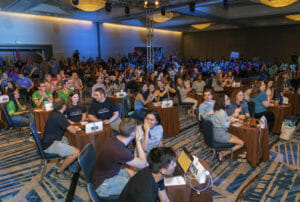 Susan Cotter OD spoke on day four about Childhood headaches: differential diagnosis for the optometrist. Dr Cotter talked about the importance of taking an excellent history, the different types of headaches, and headache red flags. The latter includes, but is not limited to, waking up with or being woken by a headache, nausea, neurologic deficits, occipital location, and headaches showing subacute or chronic progression. As headaches are the third leading cause of school absence, and the most common neurological disorder in children, optometrists have an important role in appropriately investigating, managing and referring for appropriate care when required.

Later on day four, Joseph Shovlin OD presented an excellent talk on Life-threatening eye signs and symptoms that can’t be missed. Dr Shovlin covered an array of unusual medical conditions. From lysosomal storage disease to Susac syndrome, to multiple myeloma to a case of a young female donating plasma too often and having a branch retinal artery occlusion. It was a fastpaced and fascinating hour of joining the dots of ocular signs with systemic disease.

On day five, Mohammad Rafieetary OD and Roya Attar OD presented a lecture titled Clinical review of ocular trauma: diagnosis and management. Did you know that trauma causes 40% of cases of monocular blindness? Drs Rafieetary and Attar gave a comprehensive overview of lid adnexae trauma through to anterior and posterior segment trauma and injury. Case reports covered multiple conditions, including, but not limited to, super glue on eyelids, gunshot injuries to the eye, exposure to alkalis and commotio retinae. The photographs were sobering, especially when protective eyewear can prevent 90% of ocular injuries. The presenters at the meeting work both in clinical practice (in various settings) and academia. One of the talks I attended was given by Micah Kinney OD, one of three research optometrists for the US Navy. The speakers’ breadth of knowledge across many areas, their different fields of practice, and even the different states in which they work (in Oklahoma, for instance, optometrists have a much greater scope of practice) led to presentations that were both engaging and interesting. The only difficult decision with each session was which lecture to attend, and which to miss! Based on observations of absorbed and attentive attendees, I think that being able to effectively ‘choose your own conference’ keeps everyone happy.

Aside from the presentations, there was an exhibit hall, housing the booths of over 175 companies and organisations, with representation in the areas of ophthalmic equipment, lenses, contact lenses, pharmaceuticals, education (books and journals), charities, armed forces (recruitment) and optometry schools. The biggest difference for me as an Australian, was seeing different topical and oral medications advertised, along with pieces of equipment I had not seen previously, for instance lasers used in some American states.

A reception for international delegates was held mid-conference. Here I spoke with optometrists from Germany, the UK and Nigeria. There was a distinctly Australian flavour too, as some of the staff from Optometry Victoria/South Australia (O Vic/SA) were on hand to ‘accept the baton’ for the 4th World Congress of Optometry in Melbourne in September 2021. Pete Haydon, CEO of O Vic/SA, encouraged delegates to head ‘down under’ in two years. This message was reinforced by the handing out of clip-on koalas and fridge magnets, which were exceptionally well received. From this international reception, many kicked on to the ‘Australia Party’. The Australia Party was inaugurated many years ago by the late Professor Brien Holden, and has become an institution at the Academy meetings. Blow-up kangaroos and a Canadian band playing AC/DC started the night with a bang, and the mostly American crowd kicked on late into the night.

After the meeting I spoke with the Academy’s Executive Director, Peter Scott. Mr Scott speaks of the conference as being very much a global event, that warmly welcomes delegates from around the world. He said the Academy searches out the world’s best speakers and looks for new ways to share knowledge every year. His aim is “to host a meeting where, on the Monday after, people return to their clinics and do things differently”.

The 99th Academy of Optometry meeting will be held in Nashville in 2020. I would encourage all Australasian optometrists to consider attending an Academy meeting at least once in their lifetime. There are always sound excuses not to attend – time, money and distance – but an event like this can be inspirational, motivational, and transformational both for how you practise and for how your patients perceive you.

Janelle Coates was the Optometry Faculty Scholar at UNSW from 1991 to 1994, graduating with a Bachelor of Optometry degree with First Class Honours in 1995. She attained her Graduate Certificate of Ocular Therapeutics from UNSW in 2012. In 2011, Janelle started EyesWest, her independent optometry practice in Bunbury, Western Australia.

SMILE Five Years On: Does it Really Have a Role?