AVC Virtual: The Show Goes On 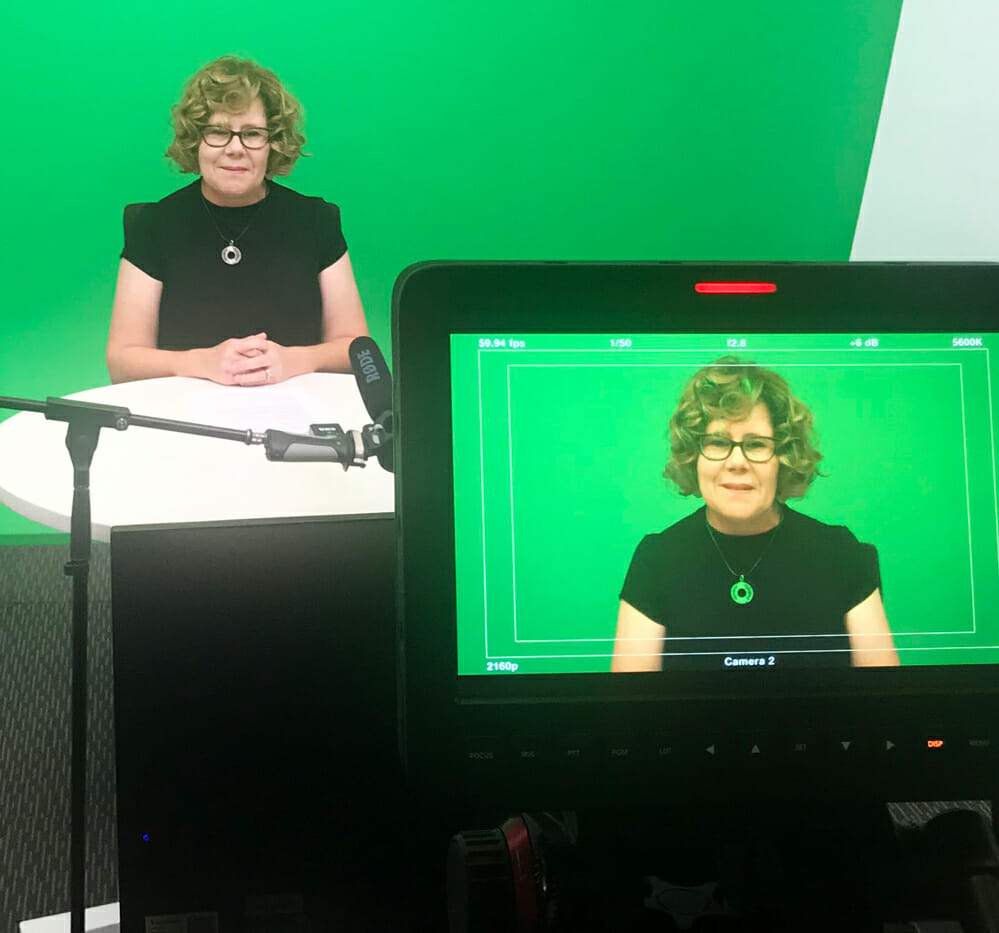 Optometrists who were planning to attend the annual Australian Vision Convention (AVC) on the sunny Gold Coast in early April were initially disappointed when the event was cancelled due to COVID-19. However, thanks to fast and proficient action b y Optometry Queensland/Northern Territory (OQ/NT), the education program went ahead via live streaming from 5–6 April as planned, and was also made available to a wider audience the following week.

They say necessity is the mother of invention, and the first AVC Virtual conference demonstrated exactly that. When the Australian Federal and state governments announced significant restrictions to gatherings, just three weeks out from OQ/NT’s annual conference, plans were immediately made to live stream the lecture series instead. Cathryn Baker, CEO of OQ/NT, said 520 optometrists attended AVC Virtual, from Australia and around the world, and feedback was “exceptionally positive”. Those who attended livestreamed presentations were able to participate in polling and were eligible for face-to-face CPD points. Others, who chose to watch the presentations when recordings were made available in the week following AVC Virtual, were eligible for fewer points.

The program enabled delegates to find out the latest on a broad range of topics, some of which are included here.

Dr Brett Drury (Gold Coast and Tweed Eye Doctors) spoke on Herpes Simplex Virus (HSV)– a common virus that is usually easy to diagnose when it affects the epithelium only, but can come with less usual presentations. He described HSV as a “successful” virus because it has been able to infect vast amounts of the human population and establish itself as almost ubiquitous world-wide – almost 90–100% of humans >60 years of age have it.

There are two types of HSV – HSV1, which affects the face, eyes, mouth and lips; and HSV2, which typically affects genitals but can affect eyes.

HSV is usually acquired with the exchange of bodily fluids via mucous membranes, usually through kissing. People acquire the virus and because the immune system supresses it, it travels down the nerves and lies dormant in the cornea or trigeminal ganglion, reactivating later in life. The cornea is almost never involved in primary infections, eye disease is always a secondary reactivation of the dormant virus. While commonly thought of as a corneal disease, (and it does mostly affect the cornea), HSV can affect all parts of the eye and orbit – the corneal epithelium, stroma and endothelium, anterior chamber and trabecular meshwork, sclera, eyelids, retinal and optic nerve.

A classic dendritic ulcer is the most common presentation and this affects the corneal epithelium only. It is identified by dichotomous branching of the dendrites with terminal bulbs. The presence of terminal bulbs is best seen without fluorescein. Left untreated or inappropriately treated, dendritic ulcers can become geographic ulcers. Topical Aciclovir 3% is the usual treatment and resistance is uncommon – if a patient doesn’t get better quickly, then it is probably a misdiagnosis. One episode of herpes simplex epithelial disease results in a 50% lifetime recurrence, which is good advice to give the patient.

PREVENTING THE SPREAD OF COVID-19

Ophthalmologist Dr Andrew Apel (The Eye Health Centre, Brisbane) presented an overview of COVID-19, and provided advice to optometrists on how to minimise its spread in practice.

He explained that transmission of the virus is via large and medium droplets.

Large droplets (>100μm) and medium droplets (between 5 and 100μm) spread through ballistic trajectory, ending up on surfaces. They have a fast deposition due to the domination of gravitational force. In contrast, small droplets are projected as aerosols (as per a can of fly spray) and are responsible for short and long-range airborne transmission.

In practice, it is important to maintain a clean and hygienic workplace, wipe down surfaces and slit lamps etc. with alcohol, and use shields on equipment to divert large droplets away – shields are commercially available and templates can be downloaded for making them. Masks are used according to the Royal Australian and New Zealand College of Ophthalmologists (RANZCO) guidelines.

Associate Professor Anthony Kwan (Queensland Eye Institute) spoke about treatment of wet age related macular degeneration (AMD) and the challenges of maintaining treatment adherence. Once patients with wet AMD have had maintained treatment for three months, they are more likely to continue treatment. While eye care professionals need to focus on improving treatment adherence, the good news is adherence has improved year on year over the last ten years. On a treat and extend regimen, patients, on average receive seven injections per year in Australia. The ALTAIR study shows that treatment with Eylea for patients with inactive choroidal neovascularisation can safely be extended to about four months without any problem (ie no fluid reoccurring). A/Prof Kwan said patients should be advised that it is most unusual for treatment to ever be stopped completely, even after the membrane has been inactive for one year, because 41% of membranes will reactivate after treatment is ceased, and any vision gained during therapy could be lost. It may not be possible to regain the same level of vision, even after treatment has been resumed.

Some patients are concerned about the risk of endophthalmitis with continuous treatment, however studies show the correlation between injection rate and infection rate is relatively low. Different types of anaesthesia are used and the infection rate has been shown to be higher with topical anaesthesia and gels. Injections can be safely performed in a clean room in an outpatient setting as recommended by RANZCO. New therapies are on the horizon, firstly with Brolucizumab having been approved by the TGA, and secondly, with encouraging study results for a prolonged treatment interval associated with port delivery devices and gene therapy. The future in the treatment of wet AMD is very exciting and promising, and A/Prof Kwan is expecting better clinical outcomes for patients in the future.

Dr Shelley Hopkins, (School of Optometry and Vision Science, Queensland University of Technology), spoke about the impact of children’s vision on academic performance.

In children, uncorrected hyperopia is associated with reduced distance visual acuity, an increased risk of strabismus and/or amblyopia development as well as poorer visuo-motor skill development. There is substantive evidence demonstrating the association with poorer performance on reading and other classroom related outcomes in uncorrected hyperopia – it has been proposed that the increased accommodative-vergence demand required to sustain clear focus during the task can create symptoms that may ultimately result in visual fatigue and disengagement from learning activities. However, there is no consensus around the minimum level of uncorrected hyperopia that negatively impacts academic performance. A common finding is that 1.50– 2.00D or more of uncorrected hyperopia is correlated with poor reading performance. Experimental studies have shown that induced hyperopia of 2.50D in children aged nine –12 years resulted in up to a 21% reduction in reading rate, accuracy and comprehension after 20 minutes. Similarly, induced hyperopia in young adults resulted in reduced academic ability test scores.

Dr Hopkins highlighted a review paper by Professor Susan Leat, published in Clinical and Experimental Optometry, that recommends hyperopia at a level greater than 1.25D should be corrected in school-aged children with no other visual problems. Dr Hopkins suggested that more high quality studies are required to better understand the cause-effect relationship and the impact of spectacle intervention on different educational outcomes.

During a rapid-fire session, PhD student Rebecca Cox reported early findings from her research to identify the ocular characteristics of Aboriginal and Torres Strait Islander Children.

By creating a normative profile of ocular characteristics in healthy Indigenous children and determining how they differ from non-Indigenous children, it will be possible to better identify what is normal and what is abnormal, which in turn will aid detection of ocular disease. This knowledge may also help identify which characteristics may predispose or protect against specific ocular conditions.

Ms Cox spoke about her early findings on glaucoma, and questioned whether the low reported prevalence of glaucoma among Australia’s Indigenous population may be due to under-diagnosis because of complications associated with disease assessment.

Ms Cox summarised findings to date saying, “This leads us to understand that glaucoma diagnosis in Indigenous Australians may be confounded by baseline lower IOPs and larger cup-to-disc ratios, and pre-existing variations in RNFL thickness. The take home message is that it is important to take extra care when you’re assessing for glaucoma in Indigenous patients because the diagnosis may not be as straight forward as we would think.”

The success of AVC Virtual opens the doors for more online conferencing in the future, though to what degree, Ms Baker says, remains up in the air.

“The feedback has been exceptionally positive from delegates who are the real gauge for how AVC 2020 Virtual went. OQ/NT felt strongly that we wanted to ensure a professional delivery for what was an outstanding AVC 2020 program – we wanted to do justice to the world class presenters who came with us on this virtual journey. We feel we have achieved this and certainly the delegate comments during and after AVC have indicated we have met that goal. We have learnt a lot along the way, so who knows what the future will bring in 2021.”

Ms Baker said although many delegates indicated they would do the virtual conference again, they also said they “love the social aspects” of on-site AVC events.

Harnessing the Power of 1,000 Lights

Leveraging Disruption for a New Future