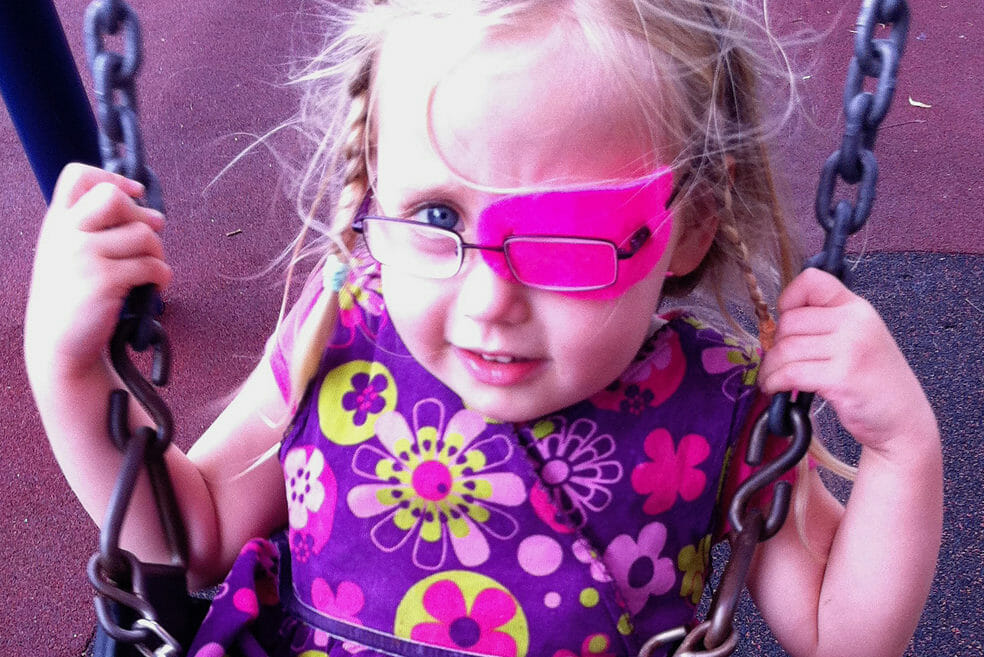 A new study on the experiences of parents with young children prescribed vision correction and/or patching has highlighted the need for eye health practitioners to offer reassurance and practical advice.

The online study, Little Aussie Eyes Report, was conducted by Senior Research Analyst and founder of Kids Eye Gear, Nicola Rivett. Ms Rivett, who has a child with a rare eye condition, gathered information from 450 Australian parents of children with vision issues.

Parents surveyed had children ranging from zero to ten years or older, who had typically been prescribed vision correction between the ages of one and five

Parents surveyed had children ranging from zero to ten years or older, who had typically been prescribed vision correction between the ages of one and five. According to Ms Rivett, this indicated that they had more serious vision issues than most – anecdotally, less than 5% of children in this age bracket typically wear glasses.

The majority of the children had been prescribed glasses (81%), while 10% wore contact lenses. Seventy per cent were diagnosed between the ages of two and five, with a small majority (20%) diagnosed at age four, compared with 18% each at ages two and three, and 14% at age five.

Parents expressed their shock and surprise at the time of diagnosis with many stating they had been upset. However the greatest challenge was not in adapting to the need for vision correction, but rather in managing it. Of parents surveyed, 62% said the greatest challenge was keeping their child’s glasses clean; 43% expressed concern over finding a frame that fits; and 41% were concerned about finding an affordable frame. Other concerns were finding a frame that didn’t break easily (37%) – 58% of parents surveyed said their child had broken at least one frame and 7% said their child had broken more than five frames. Other challenges were getting their child to wear the glasses (35%); followed by finding frames that look good (28%). Of least concern to parents was their child being teased by other kids or adults (9%).

Eighty-two per cent of children were currently, or had previously, been patched and almost 25% had been prescribed patching at the age of four. The majority of those who had patched had done so for a year. Ophthalmologists were by far most likely to have prescribed patching (80%); followed by optometrists (15%); orthoptists (7%); and behavioural optometrists (3%). Reasons for patching were mostly for amblyopia (60%); followed by strabismus (16%); and congenital cataract (15%).

Similar to vision correction, parents reported reacting with shock and surprise when patching was prescribed, though the majority (95%) had accepted the need to patch and 75% said they were happy to do so in public. For children, acceptance was split with half of the parents reporting their kids hated it while the other half reporting they didn’t mind.

According to the study, parents found the greatest challenge in patching was getting their child to wear the patches (65%). Fourty-three per cent of parents said it was difficult to find affordable patches; 30% found it a challenge to find a patch to suit their child’s skin; and 30% said finding time for patching was difficult. With 72% of parents required to patch for one long block of time rather than short bursts, most (51%) found the early morning was the best time. Parents tended to engage children with an iPad/tablet while being patched (50%); with television viewing (40%); or playing with toys (40%). Apps were used by 62% of patchers, with the most popular apps being ABC for Kids, Youtube and Reading Eggs.

“Telling parents their child has a vision problem often results in an arousal of parental guilt – they may feel they should have known there was a problem,” explained Dr Sharma. “This makes it important to reassure them that it is not their fault and it’s nothing their child could have told them either – after all, the child doesn’t know that other children see better.

“I often explain that reading vision is a different visual fibre than contrast or motion detection. That helps them understand why, for example, their child may be able to see a plane or dust on the ground and yet be unable to read letters. It is also why screening programs are so important.”

When it comes to wearing glasses, Dr Sharma said parents often have concerns because of their own memories of kids being teased with taunts of ‘four eyes’ at school. “Fortunately for today’s young children, Harry Potter has made glasses supercool so we can now reassure parents that those taunts don’t really occur,” she said.

“Many teachers are fabulously supportive and make it acceptable in their classrooms. One patient took additional patches on the first day to the class and all kids wore a patch for five minutes. This helped take the mystery out of it for the other kids and it wasn’t an issue after that,” Dr Sharma said.

For those who prefer, or also need to patch at home, there are plenty of engaging activities, on and offline to keep them occupied.

“Kids should be doing near work for at least one hour of patching time. If parents search online for ‘adult colouring pictures’ (as opposed to children’s colouring pictures which are less complicated), they will find pictures available for Star Wars, princesses, superheros and almost anywhere the child’s imagination will go. For older children I recommend parents photocopy reading / maths homework at a reduced size – 40% of the actual size can work nicely. Parents are often supervising their kids’ homework anyway so why not integrate this with eye exercises.”

Above all else, Dr Sharma said it is important that parents understand the need to take a referral for vision correction seriously from day one. “Reassure parents that their referral to a paediatric ophthalmologist is necessary to ensure the best long-term visual outcomes. The timing is critical and we don’t want their child to ‘miss the boat’ by waiting.”

More than 400,000 Australian children have long term eye disorders including myopia, hyperopia, astigmatism, cataract, glaucoma and blindness.1 Children in this study were predominantly diagnosed by ophthalmologists (57%) with 36% of diagnoses made by optometrists, 3% made by behavioural optometrists, 2% by orthoptists and another 2% of parents saying they couldn’t remember.

Ms Rivett, whose son Dane was diagnosed with a unilateral congenital cataract in 2010 when he was six months old, hopes the findings from her study will reassure other parents whose children are diagnosed with eye conditions.

“Dane had a lensectomy at seven months of age, has worn a rigid gas permeable contact lens ever since, was patched for five years and has also worn glasses since six years of age. He is now 10 years old and has almost perfect vision in his aphakic eye, so it was an amazing success given we were given a 10% chance of getting good vision in that eye. I want other parents to feel they’re not alone on this journey and to encourage parents to have their young child’s eyes checked.”

Ms Rivett plans to conduct further studies that address broader vision issues in the community to assist with education and outcomes.