Optimising Sustainability in the Optical Industry 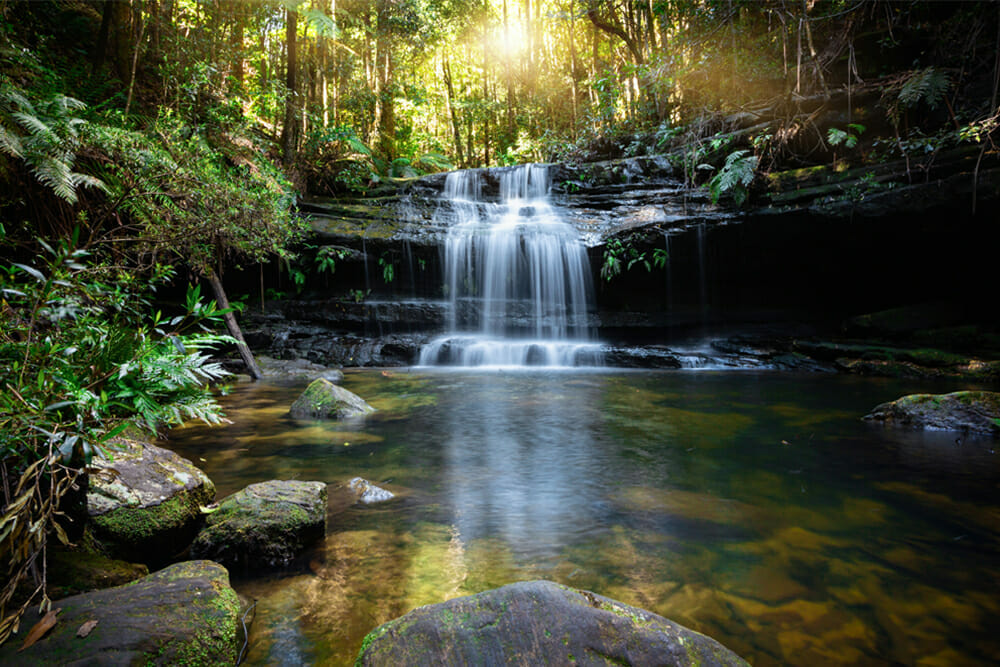 At a time when consumers are increasingly aware of human impact on the environment, it is critical that businesses – large and small – implement sustainable processes.

Spectacle and contact lens manufacturers are among many businesses leading the way in environmental sustainability efforts, with recycling initiatives and CO2 neutrality targets proving to be viable strategies.

In Australia, statistics from the National Waste Report 2018 show we generated approximately 1.1mt or 44kg per capita of glass waste in 2016–17, 57% of which was recycled.3 In the same period, we generated about 2.5mt or 103kg per capita of plastic waste, with just 12% being recycled. A further 87% was sent to landfill and 1% was sent to an energy from waste facility.3

Waste produced by the optical industry includes glass, plastics and metals as well as water used during the manufacturing process. This industrial waste contributes to our country’s overall annual national and global waste production figures, indicating the need for conscious sustainability efforts in the form of environmental management.

Environmental management involves being aware of how your business operations affect the environment and implementing strategies to ensure sustainability on all levels. This may be achieved by reducing energy consumption and emissions, using water more efficiently, and better managing waste.4

Businesses must consider all stages of the production process, from the beginning through to disposal, and focus on the efficient use of raw materials. Under the National Waste Policy, collaboration between the Australian government and businesses and industries is sanctified, ensuring recycling remains at the forefront of businesses’ environmental considerations.

One Man’s Trash is Another Man’s Treasure

Through recycling, materials considered waste by many can be transformed into products of an entirely different purpose to that intended by the original manufacturer. From its base in the Czech Republic, Rodenstock Klatovy passes on 100% of plastic waste to a company that recycles the materials into granulate, which is then used in the production of road components, playground equipment in urban areas, plastic floor tiles and more.

Furthermore, some recycled materials are used in the creation of optical frames.

THE FASHION OF UPCYCLING

From waste to reward, the process of upcycling plastic waste materials to create frames is a sustainability initiative being harnessed by Dragon Eyewear in its new Upcycled Collection.

The frame manufacturing process begins with five plastic bottles being manually separated and selected then washed thoroughly and cut into chips. These chips are then pressed into smaller pellets which are melted down and injected into the frame. Not only does this process minimise the company’s plastic waste output, it also reduces Dragon’s carbon footprint.

Dragon’s goal to reduce the impact that plastic bottles have on the environment aligns with the brand’s surfing heritage, and recognises the importance of maintaining clean, pollution free waters. In collaboration with The Surfrider Foundations’ Clean Water Initiative, Dragon is working on a multi-tiered approach to tackling ocean pollution. The initiative facilitates the testing of waters for bacteria and toxins and raises public awareness about ocean pollution and how to minimise the detrimental impact plastic waste has on our marine ecosystems.

FINDING THE VALUE IN WASTE

From beer keg lids, to discarded fishing nets and even the waste from the production of bank notes and frames, Dresden’s sustainability focus facilitates the production of environmentally friendly eyewear. The brand seeks out a range of unique, yet structurally sound, waste materials to be transformed into pellets and mixed with dye before being compressed into a mould. When the frames come off the assembly line, the offcuts are collected and reused in the production of another frame, ensuring a sustainable cycle is maintained.

Dresden’s “zero-waste, closed-loop manufacturing system” has so far saved 436kg of plastic from going into landfill, the equivalent of 17,000 frames. This process has also enabled 99% CO2 emissions reduction with the production of its nylon frame and pin design.

“We want to be part of the solution to overcome the fairly daunting environmental challenge the world is facing,” said Bruce Jeffreys, Dresden co-founder.

“We believe in treating plastic waste as a valuable resource. Every small step we take to reduce our impact is helping unclog the ecosystem of discarded plastic, and giving a smarter, new purpose to those materials.”

In terms of recycling, Essilor has already made inroads in waste minimisation through eco-designed products and by optimising its manufacturing production processes. The scrap and residue from polycarbonate lens surfacing are compressed to reduce the weight of the waste. This process collects water which is then filtered and fed back into a prescription laboratory’s internal system. Essilor also recycles and reuses certain effluents (oils, acids) in its facilities. 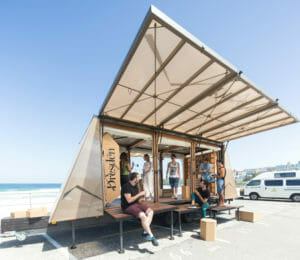 Dresden Eyewear on the road in a mobile practice.

Water management is a significant component of Essilor’s sustainability efforts. In 2018, Essilor was recognised as an A listed company by the former Carbon Disclosure Project, for ambitious commitments to optimising water use and improving the security of water resources. Essilor’s Reboost Water program maps out water consumption across the company’s main production sites, allowing them to compare performance and define mediumterm water consumption reduction plans.

A great example of the company’s success in the area of water management, is an initiative implemented at its facility in Ireland to reduce, reuse and recycle water. Between 2008 and 2013 the facility cut consumption by 35%. Additionally, by switching to a deluge nozzle to control the flow of large volumes of water used for cleaning, the site reduced the amount of water drained as waste by 70%.

Similarly, optical manufacturing company Zeiss recorded a 45% reduction in water consumption between 2009/10 and 2018/19. This success is a result of the consistent reusing of water in rinsing processes and the internal circulation of water in production, cleaning and cooling systems.

Operating under a waste management system with the aim of avoiding, minimising or recycling all waste products, Zeiss has also set specific reduction targets for waste accumulation in the 2019/20 fiscal year. Dr Nicole Ziegler, Head of Sustainability at Zeiss, said the company is on track to achieve an initial target of a 30% reduction in waste accumulation relative to 2009/10. “Already by the end of the past fiscal year, we were able to exceed this goal and achieved a 34% reduction of waste.

“For example, by optimising the pucks for lens production, it was possible to avoid more than 50 tons of plastic waste in fiscal year 2018/19,” said Dr Ziegler.

International giants in the optical industry have also pledged their commitment to reducing their carbon footprint. In 2017, Essilor signed the French Climate Pledge following the achievements of the Paris Agreement and the United Nations COP23 conference. The pledge ensures the company remains committed to limiting its impact on the climate, by financing energy efficiency programs, optimising production equipment and logistics chains, and innovating in the field of low-carbon products and services.

Dragon Eyewear considers the environment in
all of its design.

In keeping with the goal of reducing carbon footprints, Zeiss has recently adopted a sustainability strategy aimed to reduce the company’s CO2 energy consumption to neutral by 2022. Since 2010, Zeiss has kept its CO2 emissions nearly constant despite the increase in revenue and value of the company during this period.

Dr Ziegler says the next step for Zeiss is to extend its targets globally, with all international production and office sites switching to renewable energy.

A global recycling program carried out by eye health company Bausch + Lomb, is encouraging the recycling of any brand of used contact lenses and blister packs. The Bausch + Lomb Recycling Program, in collaboration with waste management company TerraCycle, calls on households, offices, schools, and other organisations to collect their used products and ship them to a TerraCycle dropping location.

Once the waste is received, the products are separated by composition and cleaned. The metal layers of the blister pacts are recycled separately, while the contact lenses and plastic blister pack components are melted into plastic pellets that can be remoulded to make recycled products. Most of the pellets are used as an alternative to virgin plastic and are transformed into items such as outdoor furniture including park benches, as well as garden beds and playground equipment.

TerraCycle operates under the goal of ‘Eliminating the Idea of Waste’, which involves recycling the ‘non-recyclable’. To promote participation, for every kilogram of accepted waste sent through the Bausch + Lomb Recycling Program, an AU$1 donation is made to Optometry Giving Sight.

Jean Bailliard, General Manager of TerraCycle Australia and New Zealand, said “most people think that items such as contact lenses are not recyclable. However, TerraCycle is working hard to change the concept of recyclability and the possibilities that exist for complex, difficult-to-recycle, but not impossible, items and circle them back into our economy in the form of new, useful products.”

In Australia there are currently 1,788 participating public drop off locations ranging from optometry practices to local schools and community centres.

One optometry practice leading the way in the recycling of its used contact lenses is Canterbury Eyecare. The Melbourne based practice has contributed to raising over $1,500 in charitable donations to Optometry Giving Sight.

Laura Carson from Canterbury Eyecare said she and her team were thrilled to find a program that enabled them to recycle the very complex materials associated with contact lenses. In addition, the practice started the initiative of providing every customer with a recycling box to encourage contact wearers to collect their products and get on board.

“As an optometry practice, we were naturally excited to hear that contact lenses, contact lens cases and contact lens packaging was able to be easily recycled… a way to recycle a product of this nature is a win all around,” said Ms Carson.

Since the program launched in 2017, more than one million items of contact lens waste have been diverted from landfill in Australia. Daria Romanos, Public Relations and Marketing Manager for TerraCycle Australia and New Zealand, acknowledged the environmental benefits that come from preventing waste from entering our oceans and waterways.

“When people choose to responsibly dispose of these items rather than wash them down the drain, they’re making a big difference to our precious marine ecosystems. I’m very proud of all the effort our collectors put in to doing the right thing here in Australia, and at a time when it couldn’t matter more,” said Ms Romanos.

Among several recycling and energy saving initiatives that Specsavers has implemented in countries around the world is a boxrecycling scheme, which has saved more than 600,000 cardboard boxes across its Asia Pacific operations. The program has also been expanded to include the reuse of plastic bags and elastic bands supplied with frames from manufacturers. In 2018, Melbourne Glazing Services reused over 700,000 frame bags, saving more than 50kg of plastic waste. Many Specsavers stores in Australia have also adopted the practice by returning plastic bags and rubber bands to the Melbourne customer services team for recycling.

ENGAGING FOR A POSITIVE FUTURE

The collaborative efforts of optical companies worldwide, to ensure an environmentally responsible approach to manufacturing, is a step in the right direction to minimising the industry’s environmental footprint. Engaging the participation of optometry practices and consumers alike in initiatives like the Bausch + Lomb Recycling Program will further contribute to the success of these efforts. The predicted flow-on effects of existing waste recycling initiatives, coupled with CO2 reduction targets, make for a promising future.