Optical coherence tomography is a valuable clinical tool that enables eye care practitioners to image the macula, disc, and mid-periphery. Doing so makes it possible to observe and monitor myopia-related degenerative change that can impact retinal structure, function and vision – as described in this article.

Optical coherence tomography (OCT) provides unparalleled in vivo information about the structure of the posterior hemisphere of the eye. While myopia can occur from an increased focusing power of the anterior segment (in particular the cornea, but also the lens of the eye), the primary determinant is greater axial length compared to the emmetropic eye. Most, but not all, of the axial growth that produces myopia happens in the second decade of life, and axial growth later in life is larger in myopes than emmetropes. This elongation of the eye is associated with characteristic retinal changes. Much of the non-refractive vision loss associated with myopia arises from retinal degeneration, with changes seen on OCT in the neuro-sensory retina, retinal pigment epithelium, and choroid.

Choroidal thickness is the most significant predictor of visual acuity in high myopes in the absence of other macular disease,6 and choroidal thinning has been used as a biomarker for myopic progression 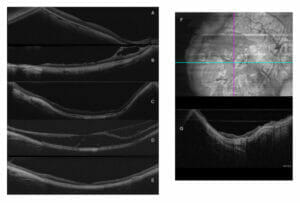 Through imaging of the macula, disc, and mid-periphery, OCT reveals many of the pathological effects of myopia on retinal structure, function and vision. The principal limitation of OCT is the size of retina that can be sampled in a single scan. Most spectral domain (SD) OCT machines image a 6–12mm long retinal segment, with a depth of image of 2–3mm. Newer, faster, swept source (SS) OCT machines provide increased sampling size up to 16mm wide and 6mm deep. This greater depth in particular, can be helpful in the more myopic staphylomatous eyes where it may be hard to visualise the entire macula in a conventional spectral domain (SD) OCT scan. The faster SS OCTs also have better resolution across the whole depth of the scan, providing greater detail of the vitreous, choroid, sclera and anatomy of staphylomata.

Myopic eyes become both larger and more irregular in shape. This irregularity can be seen with magnetic resonance imaging (MRI), and the increasingly irregular retinal contour of larger eyes can be quantified with OCT.1–3 Like all degenerative processes, myopic pathology becomes more apparent and a greater burden with age, with changes typically appearing after the fifth decade of life.4 While younger myopes often show little chorio-retinal pathology (Figure 1A and 1B),5 changes in macular volume in myopia have been measured with SD OCT in pre-teens.

Rather than increasing their total volume, sclera and choroid thin post-equatorially with increasing myopia and age, whereas Bruch’s membrane (BM) does not. Choroidal thickness is the most significant predictor of visual acuity in high myopes in the absence of other macular disease,6 and choroidal thinning has been used as a biomarker for myopic progression. Retinal thickness decreases markedly in the periphery with increasing axial length, while the neurosensory macula thinning is real but much more subtle.

The en face OCT, sometimes called the OCT C scan, can be very useful in mapping areas of abnormality in the posterior pole (Figure 1F and 1G). The size of the BM opening (BMO) near the optic disc enlarges as the eye elongates, whereas the distance between superior and inferior temporal arcades does not. BMO around the disc translates temporally with increasing myopia, contributing to the peripapillary gamma zone with associated increase in disc fovea distance. Hence the macular BM area does not enlarge with myopic eye growth.

Retinal myopic changes are degenerative and often affect vision later in life. There is a clear link between the degenerative shape features, their impact on retinal structure, and visual acuity

Irregular staphylomatous posterior segments (Figure 1C) have been associated with many of the manifestations of myopic maculopathy, and a correlation can be made between fundus photography, OCT profile, MRI appearance, staphyloma classification (Curtin classification), and visual acuity.7 Retinal curvature in OCT clearly relates to staphyloma shape, and increased curvature is associated with all myopic complications, with the mean curvature greatest in eyes with chorio-retinal atrophy, followed by myopic traction maculopathy. The latter has been associated with a more conical, less spherical staphyloma shape. Eyes with myopic macular neovascularisation have the least abnormal average curvature.3,8 Posterior staphyloma and globe distortion also lead to reduced retinal sensitivity and visual field defects.9 Simulations of retinal haemodynamics found that pathological alterations in eye shape equivalent to myopic eyes adversely affect the retinal vascular circulation,10 which may affect function.

The different forms of myopic macular atrophy (META-PM classification11) have different appearances on OCT. Diffuse chorio-retinal atrophy displays choroidal thinning with the RPE and outer retina preserved, and may have good vision. Localised patchy chorio-retinal atrophy may show a loss of inner choroidal tissues and a subsequent loss of RPE and outer retina, with complete loss of BM. Lacquer cracks (which may be subtle on OCT), haemorrhage and subsequent hyperpigmented (Foster Fuch’s) spots may all affect vision. Lacquer cracks are breaks of the RPE, BM and choriocapillaris, and are associated with thinner choroid and acoustic shadowing from fibrosis.12

The multiplicity of abnormal findings in myopia – subretinal fluid (SRF) that may arise at the edge of staphyloma and on dome shaped maculopathy, haemorrhage, and chorio-retinal atrophy – can make identification of macular neovascularisation (MNV) difficult (Figure 2, left). Changes in symptoms are an important clue. Treatment is with anti-VEGF, and it is generally accepted that control of these, and even sustained remission, can be obtained with fewer injections than are required for age related MNV. Intra-vitreal gas injections can displace sub-foveal haemorrhage (Figure 2, right), with or without sub-retinal tissue plasminogen activator, although visual results are worse if the patient is taking anticoagulants due to the risk of re-bleeding.

Myopic foveo-schisis leads to vision impairment when abnormal retinal shape leads to splitting of the retinal layers, presumably due to the inelastic inner retina/posterior hyaloid complex pulling away from the outer retina that remains attached to the retinal pigment epithelium (Figure 1D and 1E). The internal limiting membrane (ILM) is relatively inelastic, so vitrectomy, ILM peeling, and gas is effective at reducing macular schisis and limiting vision loss. Foveo-schisis should be differentiated from the less common macular hole-related retinal detachment in myopes. Surgical success for this can be affected by RPE atrophy at the macula, leading to reduced retinal adhesion force, making permanent macula reattachment with good visual acuity difficult to achieve.

Dome-shaped maculopathy (DSM) is a well-recognised myopic macula shaperelated pathology with subretinal fluid, reduced vision, and an inward convexity within a posterior staphyloma.13 DSM arises from variable scleral rigidity with uneven paracentral scleral thinning greater than sub-foveal scleral thinning, leading to a sub-foveal mound in the retina contour. This is more commonly a horizontal ridge than a true dome. The horizontal plane is generally the flattest in most eyes, with vertical scans commonly having greater curvature, and DSM is easier to diagnose with vertically oriented OCT scans. Similar to the edges of staphyloma, these eyes may develop SRF without macular neovascularisation.

Posterior Vitreous Detachment (PVD) occurs earlier in larger (more myopic) eyes,14 with a risk of retinal tears and retinal detachment 20 times higher than emmetropes.15 The presence of any visible posterior hyaloid in SD OCT macula scans usually indicates PVD has not occurred, as it often detaches first from the macula but remains attached at the disc for some time. SS OCT can provide far better images of the pre-macula vitreous than SD OCT. This has clarified many myopic features of the pre-macula vitreous: posterior pre-cortical vitreous pockets are larger (simulating PVD), and even after PVD, it is more common for vitreous cortex to remain on the macula in high myopia.16 The absence of visible posterior hyaloid in macula OCT scans can indicate either full attachment (particularly in the young, where the posterior hyaloid face may not be visible at all), or that PVD has occurred. In the latter case, imaging the mid-periphery will often identify the separated posterior hyaloid face.

An early manifestation of myopia-related retinal disease is lattice degeneration – an oval, variably pigmented, circumferentially oriented lesion, most commonly appearing in the second and third decades of life and in the vertical meridian. Lattice degeneration is a source of concern due to its association with retinal breaks and detachment. While 8–13% of the population have visible lattice, it is present in 20–30% of eyes with a retinal detachment, and 35% of the fellow eyes in retinal detachment patients.15,17,18 It is a less than ideal target for prophylaxis due to its presence in up to ten times more eyes than those that experience retinal detachment itself, and the fact that many significant tears occur in eyes with lattice but not as part of a lattice complex.19 Typical OCT findings include loss of the laminar retinal structure, retinal thinning and full thickness retinal holes, with localised retinal detachments and vitreo-retinal traction (Figure 3). Lattice degeneration occurs with increasing frequency in myopia up to -6.00 dioptres, but becomes less common with more severe myopia.20

Retinal myopic changes are degenerative and often affect vision later in life. There is a clear link between the degenerative shape features, their impact on retinal structure, and visual acuity. These changes can be observed and monitored with the OCT, and relate to both to current vision and visual prognosis.

Dr Stewart Lake is an ophthalmologist who specialises in the fields of medical and surgical retina, including macular degeneration, diabetes, vitreomacular interface disorders and retinal detachment. He is a senior lecturer in ophthalmology at Flinders University, and consults at Flinders Medical Centre and Eyemedics, Adelaide.

Let’s Work Together to Slow Myopia