Specsavers has delivered an impressive collection of professional education lectures for optometrists within and outside the organisation. Replacing the annual Specsavers Clinical Conference weekend, the lectures were presented weekly from July until October and attracted, on average, 500 delegates per session. All in all, across 12 live webinars, 5,000 hours of learning were collectively acquired.

Here is a small selection of what was on offer.

…err on the side of caution, and refer a patient, even if you are unsure 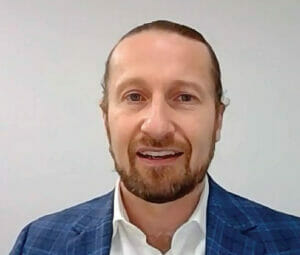 Dr Cronin described several forms of keratitis – both bacterial and microbial. Beginning with discussion on the common, highly infectious adenovirus, he recommended a simple spot test that can confirm the condition with 90% accuracy in five minutes. AdenoPlus can be especially useful in cases where patients may still have symptoms of the condition but are not infectious and therefore want/are able to return to work.

Additionally, he said it can be useful, “because while the condition is usually easy to diagnose – even from the waiting room – sometimes it is not.”

The AdenoPlus device can cause mild irritation for an hour or so – but this is remedied with lubrication.

An iodine wash can be an effective treatment option for adenovirus early on as it will shorten the duration of the infection time. However, Dr Cronin cautioned that “communication is important” before deciding on this treatment direction because an iodine wash can cause a mild sting or even excruciating pain for six to eight hours. Additionally, it can cause anaphylaxis in patients with an iodine allergy. Dr Cronin follows an iodine wash with “steroids for a few days”.

Bacterial keratitis must be treated aggressively with antibiotics to prevent disease progression. Ocuflox will cover “almost every bacteria” and should be used every hour for 48 hours then reduced according to clinical signs. Severe cases are rare, however if not clearing with antibiotics (due to non-compliance or otherwise), ophthalmologists may treat it with collagen cross linking. Another option is to treat with 0.5% Moxifloxacin instilled in the reservoir of a scleral contact lens, which will need to be changed every day.

Acanthomeoba is a rare condition in Australia and New Zealand, but one that concerns many eye care practitioners as the risk of blindness is high. Risk factors are contact lens wear and the use of fresh water when cleaning / handling the lenses. The pain from this condition is grossly disproportionate to the clinical signs. Look for an inflamed corneal nerve as “this is a screaming acanthomoeba case” said Dr Cronin. Additionally, he said pseudodentritis in a contact lens wearer is acanthamoeba until proven otherwise. Ring infiltrates and ocular ischemia are late signs of disease, and a hypopyon is very rare.

Associate Professor Lyndell Lim used case studies to demonstrate the differences between scleritis and episcleritis, which can initially look similar. However, only scleritis has a high association with systemic autoimmune disease, and they require a very different treatment approach.

Scleritis is extremely painful and is in fact, one of few eye problems that will keep a patient awake at night. Importantly this condition is associated with a number of life threatening systemic vasculidities, and for the majority (55%) of these patients, scleritis may be its first presentation. “Diagnosing a patient with systemic vasculitis could save their life, making it important to be able to recognise it,” said A/Prof Lim.

She said a thorough patient history is integral to making an accurate diagnosis as this will provide significant clues.

One of the main differentiators between scleritis and episcleritis, is that with scleritis the pain will be persistent over a duration of many months or years, whereas episcleritis is self-limiting, typically settling after seven to 10 days. Scleritis is associated with complications including corneal ulceration, uveitis and a high rate of systemic disease, whereas episcleritis has a low rate of associated complications. Another way to differentiate the two is to use topical phenylephrine.

Almost 50% of scleritis cases have an associated systemic disease – most often rheumatoid arthritis. One in 10 will have an association with an infection, typically after trauma.

Treatment of episleritis, usually with topical NSAIDs or topical steroids, should clear the condition within two weeks. Treatment for scleritis can be with subconjunctival steroids or systemic treatment with corticosteroids plus a steroid sparing agent. Biologics may be prescribed if necessary.

Professor Robyn Guymer AM delivered a practical lecture to help practitioners get the most value from their optical coherence tomographer (OCT) when talking to patients about age-related macular degeneration (AMD).

Commencing her presentation, she described the Beckman Classification, a globally agreed classification of the stages of AMD, that she would like everyone to adopt.

To ensure relevance to all eye care professionals, the Beckman Classification system deliberately stages AMD according to signs that can be seen on a colour fundus photograph.

An example, she said, is signs of reticular pseudodrusen (RPD), which are often missed on clinical examination yet increasingly associated with progression to late stage AMD. At times, RPD can look very much like hard drusen, except they are creamy in colour as opposed to being more yellow, and have different patterning. On OCT, RPD can be seen to be located above the retinal pigment epithelium and on occasion push through the ellipsoid zone of the external limiting membrane. This is in contrast to drusen, which are located beneath the RPE.

Pigmentation seen on a colour fundus photo often correspond to hyper reflective foci on or above the RPE on OCT. These indicate sick and dying RPE which will migrate into the inner retina. It is well recognised that hyper reflective foci are a high risk factor for progression and as such researchers are now spending time annotating these to help develop AI algorithms to automate the way we detect them.

While there is no treatment for geographic atrophy that occurs in the late stage of AMD, and research is currently more focussed on slowing its progression, the ability to identify early signs of geographic atrophy (GA) is important. This is now possible on the OCT where signs for nascent GA have been described by Professor Guymer’s group in 2014. It is important to be able to identify these early atrophic signs as treatments will begin to emerge in the future. Recognising imaging signs of neovascular AMD is also important as the earlier neovascular disease is detected, the sooner treatment can commence, and the better the outcomes will be.

Dr Sunil Warrier (Queensland) spoke about posterior segment lesions, which again, while uncommon to see, need to be handled promptly and with confidence.

Dr Warrier reassured optometrists that they should not be scared or too flustered if, and when, a posterior segment lesion presents itself. “Go through a checklist before referring on if you need to – but do err on the side of caution, and refer a patient, even if you are unsure, rather than sitting on something that might be life threatening.”

The check list is best summarised by the pneumonic SPOTS: Size; Position (relative to the optic nerve); Orange – the presence of lipofusion; Thickness (which can be measured by OCT or by a B-Scan in an ophthalmology clinic), and Subretinal fluid – which may be seen when examining the fundus.

The posterior segment lesion most likely to be seen is a choroidal nevus – choroidal nevi are most common in Caucasian populations and less common among populations with pigmented skin e.g. Asian nationalities.

Choroidal melanomas are the “big bad wolf ” of posterior segment lesions, affecting around seven in every one million people, and the most common intraocular malignancy in adults. Symptoms at presentation include flashes, blurry vision and rarely, floaters. Examination with OCT will detect subretinal fluid. Melanomas are often pigmented but they can be pale.

Suspected cases of melanoma should be referred on to an oncology clinic or a specialist with ocular melanoma experience. Pure retinal specialists may not be familiar with managing these lesions and will have to refer the patient on again, which can cause unnecessary time, stress and financial burden for patients.

Treatment can be successful with laser or, in the case of amelanotic melanoma, photodynamic therapy (PDT). While these options are not as effective as radiation, vision can be preserved because of the accuracy of the laser/ PDT treatment. Patients treated with laser or PDT need to be monitored as melanomas can reoccur.

Brachytherapy, or radiation, is another way to treat ocular melanoma. This is done with the application of a radioactive disc, which is sutured to the outside of the eye, in line with the tumour, for a duration determined by the radiation oncologist.

In Queensland, tumour biopsies are performed for diagnoses and research. Doing so can help classify the type of melanoma, which is important for directing follow-up. Not all are terrible – some melanomas don’t spread. Some are very malignant with a high chance – often 50% – of metastatic disease, which have a 90% chance of death within 12 months. For those with metastatic disease there is very little treatment on offer that is successful. Immunotherapies seen to successfully treat cutaneous cancers are not effective for choroidal melanoma.

Radiation will kill a melanoma in over 98% of cases with a single treatment, but it won’t reduce the risk of metastatic disease as it doesn’t change the type of melanoma it is. Side effects are all within the eye – most people will get dry eye and cataract. They may also get radiation retinopathy and maculopathy, vascular problems similar to diabetes. This is because radiation damages the endothelial cells, just as sugar does. Treatment is similar but not as successful as it is for patients with diabetes – we can’t reverse radiation damage – the priority is to save the patient’s life and preserve vision as much as possible.

If tumours are too big, radiation is not appropriate as it will result in blindness and a very uncomfortable eye. In this case the treatment approach is enucleation. With the patient under sedation, the globe is removed and muscle retained, then sutured to the implant. Implants can be acrylic or integrated. In both cases the muscle is able to control movement of the prosthesis, creating a natural effect. Some patients prefer enucleation, even if their tumour is not too large for radiation treatment, as they want to be reassured that the cancer has been completely removed.

Dr Benjamin Ashby, Specsavers’ Director of Optometry, Australia and New Zealand said feedback from participants was extremely positive and confirmed that there is appetite for virtual events.

“It’s likely that we will continue to utilise virtual tools where it makes sense – but we do want to ensure our optometrists have that valuable opportunity to connect and network in person again, once we’re able to,” Dr Ashby concluded.