Congratulations to ophthalmologists, Dr James La Nauze and Dr Stephen Godfrey, who were recognised in the 2022 Australia Day Honours List. 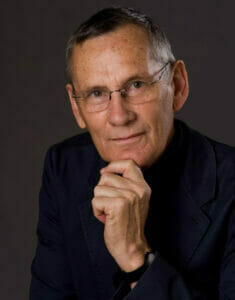 Ophthalmologist Dr James La Nauze
received an AM in the General
Division.

Victoria’s Dr James La Nauze received an AM in the General Division of the Order of Australia for significant service to ophthalmology, and to not-for-profit organisations. An associate doctor with Vision Eye Institute Footscray for 20 years, Dr La Nauze trained at the Royal Victorian Eye and Ear Hospital in Melbourne, and in Cambridge, United Kingdom. He worked in Albury-Wodonga on the borders of New South Wales and Victoria for 20 years before moving back to Melbourne to consult at Vision Eye Institute Footscray.

“I enjoyed my time working in regional Australia. Free from the hierarchy of city practices and hospitals, it offered broader opportunities and gave me greater independence to introduce modern approaches. I also felt I belonged in the community.”

But practising in rural areas came with the responsibility of building a succession plan, as Dr La Nauze explained, “You can’t establish a service and then leave people in the lurch” if you choose to move or retire.

The solution he and others identified was to introduce registrars to the rewards of working outside cities by establishing ‘contextual based training programs’ in regional Australia, which were government subsidised.

“We became the first of the subspecialties to do this and it certainly stimulated the movement of ophthalmology registrars to rural areas,” he said.

With no hospital or outpatient clinic in Albury-Wodonga, the registrars worked alongside Dr La Nauze and colleagues five days a week in their rooms.

“This meant they were more exposed to both patients and supervising doctors, and were able to experience the issues in running an ophthalmic practice. This project was evaluated by the Commonwealth Government in 1996 and has since become the model for placing trainees within private practice across many disciplines around Australia.”

The trainee program also provided the impetus to successfully advocate for government funded equipment, including YAG lasers and phacoemulsification equipment to be used in both public and private settings.

“We introduced several procedures to regional Australia including fluorescein angiography and intraocular lens implantation. We became the only place in Australia at that time, where people could be trained on phacoemulsification techniques – in the cities at that time, it was only available in private clinics. Dr Con Moshegov, who recently died from COVID was a ‘graduate’ of the Albury program and at every conference would make an effort to come up and say how he enjoyed his term there. The feeling at the Albury Eye Clinic was mutual.”

While practising in Albury, Dr La Nauze also contributed to the establishment of a low vision clinic and a multi-disciplined clinic to care for the needs of people with disabilities in the region.

“I believe that, as local practitioners, we needed to provide comprehensive health care to all people. These clinics meant people with low vision or other disabilities no longer needed to travel to and from Melbourne to access services.”

It was this strong sense of responsibility to community, imbued in Dr La Nauze by his mentors Drs Dick Galbraith, Peter Watson, Fred Hollows, Frank Martin and others, that drove his contribution to eye care in developing countries and remote communities of Australia. Since 1993, much of this work has been through his involvement with The Fred Hollows Foundation.

“(Laureate Professor) Hugh Taylor brought me on board as part of the Foundation’s medical directorate alongside Professor Mark Gillies, Dr David Moran and Garry Brian. We developed and delivered comprehensive skills transfer programmes in modern cataract and intraocular lens implantation surgery in Vietnam, Cambodia and China.

“These programmes were innovative in their breadth and became the global models for training in cataract surgery, especially at scale. Quality assurance was embedded into the skills transfer as well as comprehensive ongoing surgical development. Innovative ways to finance the surgery were introduced and we sourced cost effective surgical materials and equipment.

“It was a high volume way to rapidly establish the skills needed for the sustainable delivery of eye care.”

While there were some early critics of the program, Dr La Nauze says, “it was much more sophisticated than people believed” with ongoing mentorship and support, as well as efforts to overcome cultural barriers that had potential to lessen outcomes.

In Vietnam for instance, by gaining the trust of the Minister for Health (an ophthalmologist), a hierarchical medical system was broken down so that doctors felt more comfortable sharing experiences, talking about issues encountered, and learning within a collegial environment.

“We managed to change the dynamics of eye health delivery and we repeated the model in China and Cambodia. It’s a great legacy – it’s superb to see what’s happening,” he said.

In 2010, Dr La Nauze joined the Board of Fred Hollows Foundation and chaired the Medical Advisory Committee (MAC). Acting on a recommendation from the MAC, the Foundation developed its strategy for the elimination of trachoma. This is now the Foundation’s largest programme with in excess of US$30 million expended to date. Since 2015, over 70 million people have received antibiotics and more than 213,000 trachoma surgeries have been performed throughout the Foundation’s programs.

Dr La Nauze said accepting the award made him reflect on the millions of people who have been part of his journey to improve eye health outcomes. “It’s the work that’s important here, not the recognition of individuals. When Fred died we didn’t seek publicity. There was work to be done by the Foundation and so we did it.”

The Australia Day Honours List also recognised ophthalmologist Dr Stephen Godfrey with a Medal (OAM) of the Order of Australia in the General Division for services to medicine as an ophthalmologist. A graduate of the University of Queensland Medical School, after seven years as a GP and country medical superintendent in the central west of Queensland, Dr Godfrey completed ophthalmology training in Brisbane. The founding partner of Outlook Eye Specialists in Queensland since 1999, Dr Godfrey has been Chair of the Royal Australian and New Zealand College of Ophthalmologists (RANZCO) Queensland Branch, since 2017. He has been a volunteer specialist with the Aboriginal Outreach Eyecare Service in remote North Queensland for 20 years.