This article reviews the different IOL options for use in glaucomatous eyes, the factors that need to be considered when selecting the right lens, and what outcomes patients might expect.

Cataract surgery provides an excellent opportunity to enhance the quality of life for patients with glaucoma. Advances in intraocular lens (IOL) technology can now provide greater spectacle independence in selected patients and maximise quality of vision. However, to achieve optimal outcomes, careful consideration and counselling are necessary to match the right IOL technology to a patient’s condition and expectations.

…suitable patients motivated to reduce their dependence on glasses may be better served with monofocal plus, EDOF, or multifocal IOL technology 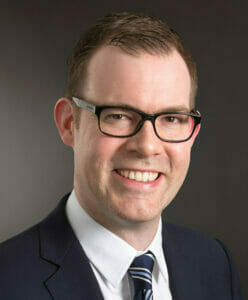 It is estimated that approximately one in five people undergoing cataract surgery have glaucoma or ocular hypertension. Both cataracts and glaucoma are conditions that increase with age.1 Treatment with glaucoma eye drops2 and filtration surgery3 may also accelerate cataract development.

It is important to remember that for people with glaucoma and cataract, both conditions need to be adequately addressed. The introduction of cataract surgery combined with minimally invasive glaucoma surgery (MIGS) now allows both conditions to be treated in a single procedure. However, historically, the pathophysiological changes in glaucoma have limited IOL choices for people living with the condition. Fortunately, new presbyopia-correcting IOL technologies are providing greater options for people with glaucoma who wish to reduce their dependence on glasses.

In addition to contrast sensitivity, there are other changes that can influence IOL performance. Eyes with glaucoma tend to have smaller pupils than non-glaucomatous eyes7 and this can impair the performance of pupil-dependent IOL technologies. As well as poor pupil dilation, conditions such as pseudoexfoliative glaucoma may be associated with zonular weakness. This can lead to IOL decentration that can impair the performance of presbyopia-correcting IOLs and induce higher order aberrations.

The performance of presbyopia-correcting IOLs is affected by the quality of the tear film and ocular surface. Dry eye and ocular surface disease are more common in patients with glaucoma, especially in those taking multiple medications containing preservatives. Careful attention should be paid to the ocular surface and co-existing dry eye and lid conditions, such as blepharitis, treated pre-operatively. This is critical not only for IOL performance post-operatively but also to obtain the most accurate biometry measurements that will be used for surgical planning and IOL power selection pre-operatively. For patients with intolerance to glaucoma eye drops or where drops are ineffective, I discuss combining cataract surgery with a MIGS procedure to reduce medication burden and to help promote a healthy ocular surface that may in turn lead to better quality vision.

Lastly, glaucoma is a lifelong and potentially progressive condition. Before surgery, I evaluate many clinical factors including the stage of glaucoma, IOP control, adherence with therapy, optic disc appearance, retinal nerve fibre and ganglion cell analyses, visual field loss, risk factors for progression, and co-existing retinal/macular disease, to determine IOL suitability not only now, but in the future.

Progression after IOL implantation could result in unwanted visual symptoms and compromise quality of vision. For this reason, I avoid multifocal or extended depth of focus (EDOF) IOLs in patients with advanced disease or central visual field defects, as well as those at high risk of progression. Patients must be carefully counselled on the outcomes they can expect and what lens is best suited to their individual circumstances.

IOL OPTIONS AND HOW TO CHOOSE THE RIGHT LENS

The choice of IOL is one of the most important decisions in cataract surgery as it will influence the quality and range of vision a patient may expect after the procedure. To select the correct lens, we need to understand the benefits, risks, and safety profile of each lens in relation to pre-existing glaucomatous change (and concurrent eye conditions), visual expectations, patient motivation, and occupational/recreational visual needs.

A monofocal IOL is an option for all stages of glaucoma. Providing excellent distance vision when aimed for emmetropia, these lenses require spectacle correction for intermediate and near activities. With greater use of tablets, digital automobile dashboards, and smartphones in everyday life, patients can find this frustrating. Monovision is a way to reduce but not eliminate spectacle dependence,8 however it is associated with a loss of depth perception and suboptimal vision at intermediate distances.9 For this reason, suitable patients motivated to reduce their dependence on glasses may be better served with monofocal plus, EDOF, or multifocal IOL technology. 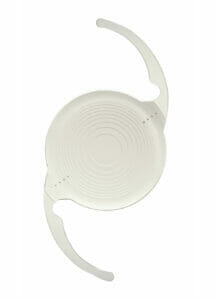 A new type of monofocal is the Tecnis Eyhance (Johnson & Johnson Vision), part of a novel category called ‘monofocal plus’. While not meeting the criteria to be categorised as an EDOF IOL, the unique refractive surface design of the Eyhance lens is designed to slightly extend the depth of focus, providing improved intermediate vision compared to a standard monofocal, while maintaining similar distance vision. I was fortunate to have early access to the Toric Eyhance and my patients reported ease with activities such as cooking and using tablet mobile devices. The lens has a low incidence of dysphotopsia and the company reports that it delivers 30% better image contrast in low light at 5mm compared to a standard monofocal lens. As such, these features would suggest this lens may be safe to use in most patients with glaucoma.

I use monofocal IOLs for patients who are happy to wear spectacles for intermediate or near activities, or if there is (or there is a significant future risk of) advanced or central visual loss where the use of an EDOF or multifocal IOL may further reduce contrast sensitivity and compromise the quality of vision, especially for low-light tasks. For patients with pseudoexfoliation and weak zonules, a standard monofocal may be preferable as IOL power is the same from the centre to the edge and it will induce less aberrations if there is decentration in the future.

Patients with glaucoma may have astigmatism, especially if they have undergone trabeculectomy.10 Toric IOLs can safely and predictably reduce astigmatism and provide better uncorrected vision in patients with glaucoma.11 Correcting even low levels of cylinder can improve the quality of vision. Toric lenses are available for all types of IOL and can be used in all stages of glaucoma. These lenses can be combined with astigmaticallyneutral MIGS procedures but should be used with caution in combined cataract surgery with trabeculectomy because of the unpredictable degree of surgically-induced astigmatism with conventional filtration surgery.12 Similarly, caution should be applied when considering toric IOLs in patients with small pupils and zonular weakness due to the risks of misalignment, decentration, and dislocation. 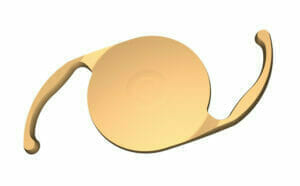 Extended Depth of Focus IOLs IOLs are an entirely new category of presbyopiacorrecting lenses designed to improve range of vision, especially intermediate vision, with few photic phenomena and less loss of contrast sensitivity compared to traditional multifocal IOLs. As such, EDOF IOLs may be an option for people with glaucoma who wish to reduce their dependence on glasses, but otherwise may not be candidates for a multifocal IOL. Unlike multifocal IOLs, which create distinct focal points, EDOF lenses provide a continuous range of high-quality vision from distance into intermediate and even near, although not providing as much near vision as a multifocal. However, targeting the nondominant eye for -0.5D can enhance binocular near vision for patients who demand superior near vision while retaining good binocular distance vision. EDOF IOLs provide excellent intermediate vision, which is ideal in today’s digital lifestyle with increasing use of computers, tablets, and smartphones. These lenses have a low incidence of dysphotopsia and few night vision symptoms.

The AcrySof IQ Vivity (Alcon) is the first non-diffractive EDOF IOL that aims to deliver an extended focal range and has been shown to have a monofocal-like visual disturbance profile. Light is not split or distributed to several focal points, allowing for the entire light energy to be used. In a prospective, randomised, controlled trial of 220 subjects bilaterally implanted with either the AcrySof IQ Vivity IOL or a monofocal IOL, the AcrySof IQ Vivity group had superior intermediate and near vision compared to the monofocal control group without degradation of distance vision. The incidence of bothersome visual disturbances in the Vivity group was low or similar to the monofocal group, with only 1% of patients bothered very much by halos. To date, there is limited clinical data on the performance of the AcrySof IQ Vivity in glaucomatous eyes. My research has examined the visual outcomes, spectacle independence, and patient-reported satisfaction with bilateral Vivity IOLs implants, compared to bilateral monofocal IOL insertion, in patients with glaucoma. We found that bilaterally implanted Vivity IOLs provided excellent distance vision and better intermediate and near vision compared to monofocal IOLs in patients with glaucoma. Spectacle independence and patient satisfaction was significantly higher in patients who received a Vivity IOL. Photic phenomena were rare and seldom bothersome.

I offer EDOF technology to patients who have early to moderate, stable glaucoma with only peripheral field defects and absolutely no loss of sensitivity in the central 10 degrees. Patients with secondary glaucoma or co-existing retinal pathology are poor candidates and may be better managed with a monofocal IOL.

Multifocal IOLs provide distance, intermediate, and near vision with a high level of independence from glasses. However, as mentioned, these lenses split light and reduce contrast sensitivity which could theoretically impair the quality of vision in eyes with glaucoma, especially in low light level settings. While new generation multifocal IOLs have improved light transmission and less impact on contrast sensitivity then older generations, these lenses should be used with caution and on an individual basis for people with glaucoma. There is limited data on the use of multifocal IOLs in glaucomatous eyes and existing studies are small.17 As such, I tend to restrict the use of these lenses to patients with primary angle closure, ocular hypertension, and stable pre-perimetric or early glaucoma.

For people with glaucoma and cataract, these are exciting times. The introduction of MIGS has enabled us to simultaneously address both cataract and glaucoma in a single procedure. For many people, this allows them to reduce their medication burden or even stop taking glaucoma eye drops. Now, with refractive cataract surgery and new IOL technology, we can also reduce dependence on glasses by correcting presbyopia and/or astigmatism at the time of lens extraction. Ultimately, these interventions help us maximise a patient’s quality of vision and improve their quality of life.

To earn your CPD points from this article visit mieducation.com/iol-selection-in-patientswith- glaucoma. Dr Nathan Kerr is a specialist cataract and glaucoma surgeon in Melbourne, Australia. Dr Kerr completed a prestigious fellowship in Minimally Invasive Glaucoma Surgery (MIGS) at Moorfields Eye Hospital in London and is one of Australia’s most experienced MIGS surgeons. He was one of the first Australian surgeons to perform the XEN and PreserFlo MicroShunt and he has been invited to teach MIGS surgery in the United Kingdom, Switzerland, France, and Australia. Dr Kerr serves as a Glaucoma Section Editor for Clinical and Experimental Ophthalmology and is a Principal Investigator in Glaucoma at the Centre for Eye Research Australia. Dr Kerr is a consultant ophthalmologist at the Royal Victorian Eye and Ear Hospital and consults privately at Eye Surgery Associates in East Melbourne, Doncaster, and Vermont South. Visit: doctorkerr.com.au.