The proliferation of therapeutic laser options for the treatment of glaucoma begs the question: When should laser treatment be offered as a first-line therapeutic option for glaucoma patients, or at the very least, considered in the arsenal of glaucoma treatments?

Considerable advances in our mechanistic understanding of the pathogenesis of glaucoma in the past few decades have enabled a better characterisation of glaucoma, a heterogeneous group of diseases defined by a hallmark optic neuropathy and associated visual field defects. 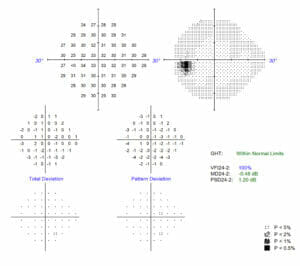 Figures 1 and 2 (above and below). Visual field analysis showed James had no visual field defects.

Despite these developments, high intraocular pressure (IOP) remains the sole clinically relevant modifiable risk factor for this disease. As such, designating a target IOP and tailoring treatments to meet it, is a critical component of glaucoma management.

The last few decades have borne witness to the proliferation of therapeutic laser options for the treatment of glaucoma. This has seen a considerable paradigm shift in the management of glaucoma by ophthalmologists, as lasers are increasingly being used – often as a first-line option – in the management of angle closure as well as open angle glaucoma.

A BRIEF HISTORY OF LASER IN GLAUCOMA

The IOP-lowering utility of an iridectomy was discovered at the turn of the 20th century.2 Since then, subsequent decades have yielded a superior mechanistic understanding and development of the classifications of different types of glaucoma, each with its respective treatment approaches. The adoption and successive evolution of the laser – from laser photocoagulation, to pulsed ruby lasers, to the argon, then Nd:YAG laser – throughout the 1960-70s, allowed angle closure glaucoma to be managed with laser peripheral iridotomies (LPI) conducted within a clinic rather than an operating room.3

Within the open angle glaucoma sphere, the finding by Anderson and Parrish in the 1980s, that selective absorption of applied radiation by pigment-laden cells could yield localised tissue damage,4 led to the increased uptake of argon laser trabeculoplasty. The variable and nonsustained IOP-lowering effect,5 and the detection of undesirable sequelae such as IOP-spikes and local tissue damage,4 eventually led to the proliferation of selective laser trabeculoplasty (SLT) from the early 2000s.

Despite its poorly elucidated mechanism of action, the superiority of SLT is clear: it is quick, has fewer adverse effects, and can be conveniently performed in an outpatient setting. Most critically, it can be performed multiple times, albeit with diminishing efficacy.6

Multiple trials have been conducted that shed some light on this matter.

This multi-centre randomised controlled trial compared the effectiveness of SLT with topical latanoprost eye drops as first-line treatments for patients with untreated ocular hypertension and open angle glaucoma. At three years, there was no statistically significant difference in IOP (though more patients had IOPs within target range in the SLT arm) or quality of life between either treatment arm. Primary SLT enabled IOP control without adjunctive topical medications for at least 36 months in 74.2% of patients; was more cost effective over that period; and fewer patients exhibited disease progression.

The Efficacy Of Repeat SLT: An Extension Of The LIGHT Trial (2020)8

The repeatability of SLT was further examined in a follow-up study where 115 eyes of 90 patients received subsequent SLT during the first 18 months of the trial. Repeat SLT resulted in a clinically and statistically significant reduction in IOP at two months, which was proportionally greater than the IOP reduction effect achieved by initial SLT alone after adjustment for pre-treatment IOP. These findings support the repeatability of SLT and may suggest an additive effect of repeat SLT. 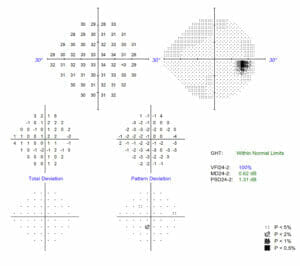 While LPI is frequently performed across the spectrum of angle closure glaucoma, and is considered to be a low-risk procedure, it remains debatable whether there is a role in performing it in populations with lower severity disease such as primary angle closure (PAC) or PAC suspects (PACS). Earlier studies, such as the EAGLE study,11 have elucidated the efficacy of phacoemulsification over LPI for cases of primary angle closure glaucoma (PACG) or PAC with IOPs exceeding 30mmHg, however extrapolation to PACS, and PAC with IOPs less than 30mmHg, remains controversial.

Two studies have addressed that very question. The ZAP randomised controlled trial investigated the effectiveness of prophylactic LPI in Chinese patients with PACS, compared with no treatment, in preventing incident PAC disease at six years. LPI had a modest, but significant effect in mitigating the risk of PAC (4.19 vs. 7.97 per 1,000 eye-years), however it was concluded that the low incidence of PAC greatly limited more widespread uptake of this clinical practice.

Another more recent trial (ANA-LIS), conducted in Singapore, exhibited a similarly low incidence of PAC or PACG, with a similar halving of PAC development in five years after LPI treatment.

This double-masked, placebo-controlled RCT investigated the effects on IOP reduction with the administration of ketorolac 0.5%, or prednisolone 1%, or saline after performing SLT in patients with ocular hypertension or open angle glaucoma with pre-treatment IOPs greater than 18 mmHg.

While the administration of ketorolac or prednisolone yielded greater reductions in IOP (about 5-6 mmHg) compared with placebo saline drops, this reduction only became statistically significant at 12, but not six weeks. Another confounding factor was that there were variable degrees of SLT treatment between the groups, which may have affected the amount of IOP reduction.

James* is an active 45-year-old gentleman of Caucasian ethnicity, typical of many patients referred for assessment for glaucoma. He has asthma, and a strong family history of glaucoma. When examined, James’ visual acuities were 6/6 OD, 6/6 OS, and intraocular pressures were 30 mmHg OD and 29 mmHg OS with Goldmann applanation tonometry. James’ central corneal thicknesses were 505μm OD and 508μm OS. His anterior chambers were open to ciliary body 360o OU with no peripheral anterior synechiae. He was phakic bilaterally, with no cataract. There was no evidence of pseudoexfoliation, pigment dispersion syndrome, or other features of secondary glaucoma. Optic nerve findings revealed 0.7 cup-disc ratios, with healthy neuroretinal rims. He had no visual field defect.

James was diagnosed with ocular hypertension. Given the elevated intraocular pressures and in the context of thin central corneas, it was determined that he would likely benefit from treatment of his elevated intraocular pressure. His options for treatment included topical anti-glaucoma medication or SLT. After discussion, James elected to proceed with SLT in order to avoid any adverse medication reactions. Understanding that SLT would not be a cure for his ocular hypertension, he agreed to regular ongoing reviews.

Mary* is a 57-year-old lady of East Asian ethnicity who presented to the ophthalmology clinic complaining of decreased vision. Her vision was 6/9 OU, but IOPs were elevated at 24 mmHg OD and 25 mmHg OS. Gonioscopy revealed segmental bands of peripheral anterior synechiae OU. Central cornea thicknesses were 558μm OD and 560μm OS. She was phakic with NS1+ cataract bilaterally. Optic nerve examination revealed 0.4 discs bilaterally with healthy ganglion cell and retinal nerve fibre layers. There was no visual field defect.

In the absence of glaucomatous optic neuropathy, Mary represents a case of primary angle closure. She was a candidate for management of PAC with a laser peripheral iridotomy +/- topical anti-glaucoma medications. Mary was counselled for symptoms of acute angle closure and required ongoing reviews to monitor her anterior chamber angles, cataract and optic nerves.

Laser treatment may be used as a first-line or adjuvant management in open angle glaucoma, but is critical in managing closed angle glaucoma.

• SLT is useful in treatment of open angle glaucoma that avoids medication non-adherence and adverse reactions,
• SLT can be repeated,
• Patients with PACS can be treated with a LPI, although the incidence of transformation to PAC is low even with observation, and
• Judicious use of topical steroid medications after laser treatment may be useful.

Dr Jason Ha MBBS(Hons), BMedSc(Hons) is an ophthalmology registrar based at the Royal Victorian Eye and Ear Hospital. He is an aspiring clinician-scientist and PhD scholar in the prestigious MACH-Track dual academic-clinical training pathway.

Dr Bob Wang MBBS, B.Optom, FRANZCO is an experienced cataract, glaucoma and medical retinal specialist. With a strong interest in research, he has numerous peer-reviewed publications and has presented his research at many national and international scientific conferences. Dr Wang has an active role in teaching and mentoring optometrists, medical students, and ophthalmology registrars. He consults at Melbourne Eye Specialists, Ringwood Eye Specialists and Springvale Eye Clinic, at the Royal Victorian Eye and Ear Hospital, The Alfred Hospital and Monash Health.