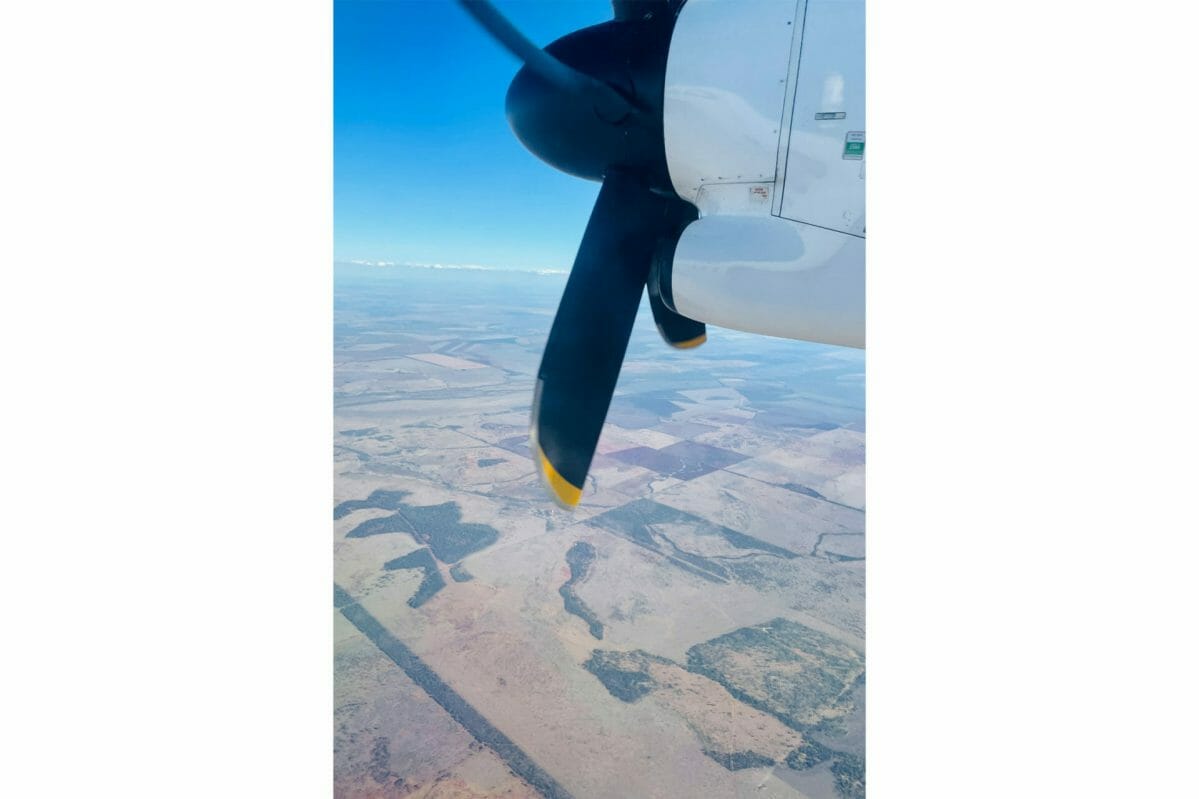 I never thought I would make a good ophthalmic surgeon. A strange thing to say, I know. But throughout the journey that has led me to this point in my life, I have often asked myself why I chose this career.

Recently, as I looked out of my window seat from 30,000 feet above sea level, at the vast land below me, I asked myself again. I was traveling on a Qantas Skylink flight to Emerald from my home in the Sunny Coast.

This was to be my first trip to Central Queensland, where I would spend two very interesting days – to say the least – operating.

The opportunity to travel to Emerald unfolded when I was approached by Lyndall DeMarco, Chief Executive Officer and Director of the Ideas Van. She invited me to do some cataract surgery in regional Queensland as the current visiting ophthalmic surgeon was retiring, and someone was needed to fill his shoes.

Emerald, you have taught me well and will continue to be my calling for many years to come 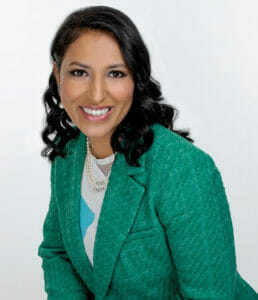 I agreed without hesitation. Having spent three years in Far North Queensland, I felt I was ready for this next phase in my career. I was up for the challenge.

A tranquil regional town, Emerald is located on the Nogoa River in Queensland’s beautiful Central Highlands, nine hours inland from Brisbane. Surrounded by the best of Queensland’s countryside – large parcels of farmland – the town is known for its nearby sapphire gemfields. Beyond are the mighty great deserts that define this landscape.

The locals, who are no strangers to hard work, consist largely of miners, crop and cattle farmers.

When flying over, the sight of haunting deserts transforming into lush farmland with pivot irrigation systems extending over a kilometre, is truly a sight to behold.

My flight landed at 5.35pm on the Easter Monday holiday and I made my way to the motel that was to be my abode for the next two days.

It is uncanny how the locals can spot an outsider from a mile away. The check in clerk very quickly guessed I was a doctor and extracted my resume within a matter of minutes. Much to my surprise, she instantly upgraded me and thanked me for coming all this way, while providing the personal WIFI password for the “higher speed” internet at the motel. I thanked her graciously, made my way to my room, and intently studied the last few videos on cataractcoach.com ahead of my first big day.

Before I knew it, the alarm was ringing. It was 6am… show-time. I got myself dressed and headed to Emerald Hospital.

The cool morning air was refreshing as I drove through town, arriving at the Hospital within seven minutes. I headed through the emergency department and up to the operating theatre floor, announcing myself at the locked doors.

The staff buzzed me through. No questions asked, just a friendly nod.

The atmosphere that greeted me in the theatre was even more reserved. I could sense the staff ’s apprehension, and justifiably so. There had not been a cataract list for five months and they had no sense of who I was, except that I had come from the Sunshine Coast.

Thankfully, my friendly Bausch & Lomb (B&L) representatives, JC and RE, were there to support me through the next two days. This was especially true, given that this was my very first time using the Stellaris Elite, a vacuum-based phacoemulsification system that I had been introduced to, just weeks earlier, via a video presented by Prof Graham Barrett and Dr Paul Singh. Mental note to self; it is as much about the fluidics as it is about my technique. Just get on the horse and progress with purpose.

As it transpired, I need not have feared the “dreaded vacuum” – it was about to get me out of some very tricky situations.

Once pleasantries were exchanged and the team huddle was done, the list kicked off.

Nice and slow, I told myself. Working in the middle of Central Queensland, with the nearest specialist eye unit a flight away in Brisbane, I couldn’t afford to bust any posterior capsules; certainly not on my first list.

I got the first couple of cases under my belt with relative ease and sighed. Perhaps this wouldn’t be the toughest cataract list I had ever embarked on after all. Yes, they were all dense, and there were a few small pupils in the mix, but nothing had thrown me yet. And in any case, I had the Elite. I was amazed by the way it cut through and emulsified the densest nucleus like butter.

I reflected on Prof Barret’s phaco chop technique, with an upper vacuum limit of 200. While this would be inconceivable with any phacoemulsification peristaltic system, it wasn’t an issue with the Elite. My vacuum settings – although a little higher at 300 – worked beautifully alongside longitudinal phacoemulsification for the Emerald cataracts.

All went well until Brien* hit the table – he was to be my last case before the break.

Remember my earlier thoughts about this list not being too bad? That may have been a misplaced sense of security.

I quickly discovered that I was about to embark on the hardest cataract case of my entire career. Staring at me was an eye with a prior history of trauma and an intumescent white cataract. 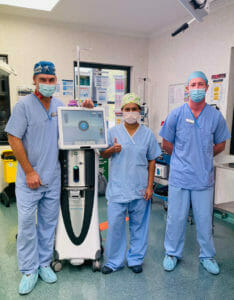 I entered the eye and, once the capsular bag was decompressed and milky lens material aspirated. I commenced the rhexis. That’s when the fun really started as I discovered a fibrotic lens capsule that refused to tear – despite digging my cystotome in – 180º of inferior zonular dialysis, a highly mobile lens and capsular bag, and a pupil that started reducing in size.

I could only guess the state of the posterior capsule. A combination of the can opener and vitrectorhexis technique left me with a baby rhexis and limited possibility for extension as the lens and capsular bag were moving in 100 different directions. I may have avoided the dreaded Argentinian flag sign, but how was I supposed to get this nucleus out of an opening no bigger than 3mm?

“When at first you don’t succeed, chop, chop, and chop again,” as Cataract Coach Prof Uday Devgan would say.

With that being my only option, I chopped away, viscoat on stand-bye, ready to tamponade what I hoped was the posterior capsule.

“Do not decompress the anterior chamber… do assume the worst… although the dreaded V (vitreous) is yet to make an appearance, I must get all the pieces out,” I repeatedly told myself.

It was at this point that JC sprang into action. Certainly not your average B&L rep, JC has been supporting eye surgeons in locations as far flung as Broken Hill for over 20 years and his experience really shines through. So, with the eye of faith and JC’s support, I kept my phaco probe centred as the Elite not only impaled but brought all the pieces centrally to me and emulsified them at rocket speed.

Stellaris Elite, what a beauty! The nucleus was out and the only collateral damage I could see was an opening in my baby rhexis temporally, with an intact posterior capsule. What a relief.

I looked up at the scrub nurse, asked for a three-piece intraocular lens (IOL) to implant in the sulcus, and was slightly alarmed when she and the scout nurse uttered in unison, “We don’t keep those lenses”. I was gobsmacked.

Miraculously, upon hearing that I would need to fly the patient to Brisbane for an IOL implantation, a small stash of MA60AC lenses was produced and JC factored in the IOL power correction.

Then came the next challenge; inserting the lens into the eye.

While this would have been easy with a cartridge / injector to deliver it, all I had at my disposal was a pair of Kelman-Mcpherson forceps. It was time to get creative. So, armed with a Kelman and rhexis forceps, I managed to fold the lens without a mark on it and get it into the sulcus. I closed the eye with a 10-0 box suture and a huge sigh of relief.

I’d done it and even JC, with all his experience, admitted this was a really, really tough case.

I still had another four cases to go but the worst was over. Even the next elderly patient – with a small pupil, floppy iris, dense cataract, and dementia with movements on the table that would match Michael Jackson belting out Beat It – went well. This was despite the scout nurse’s concerns about the limited number of viscoelastic we had on standby for the last few cases.

The day finally came to a close at 7pm and I was exhausted, as were the staff who had persevered like champions. It had been hard, but we had survived.

The scrub nurse left the hospital to drive 100km home to her 12,000-hectare cattle farm, only to be back in at 7am the next day. The tenacity of the human spirit is amazing.

The next morning went like clockwork, despite the dense cataracts. I was chopping like a pro and yet to use a single Malyugin ring – the Elite had proven its worth and I was sure I’d use nothing else from now on.

I saw Brien in between cases. Waltzing in wearing a Hammerhead Whisky t-shirt in bright red, he was over the moon. Gratitude flowed from all the patients, and I knew I had already made a difference.

Towards the end of the day, as I wrapped up the final cases, JC threw me a nod and I could see respect in his eyes.

Without a doubt yes!

Emerald was a baptism of fire, but I have lived to tell the tale.

As the Qantas Link turbo prop pulled away and I looked out upon the great vastness of the land once again, I recounted the last 48 hours and smiled to myself. Having trained hard all those years, it was satisfying to be able to give something back.

And, to regress to the question I asked of myself in opening this story… I had found the answer.

I am truly grateful to be an ophthalmic surgeon and for this humbling experience because it tested me in every way.

Emerald, you have taught me well and will continue to be my calling for many years to come.

Dr Moorthy has recently moved to the Sunny Coast from Far North Queensland. She continues to provide Indigenous eye care as a visiting ophthalmologist to Emerald, Central Queensland. She is also committed to training the next generation of ophthalmologists and sits within the RANZCO Ophthalmic Sciences Board of Examiners and Women in Ophthalmology committee group.