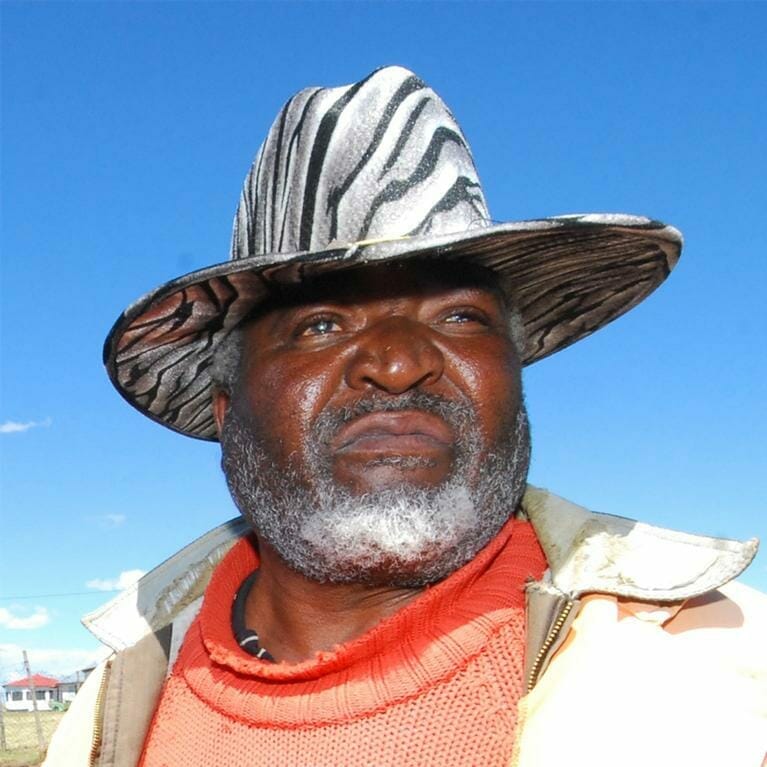 Fred said that Africa was one of the reasons he became an ophthalmologist. He realised that one of the most useful things a doctor could do there was to take out a cataract.

According to the Bureau for the Prevention of Blindness, an estimated 225,000 people are needlessly blind from cataracts in South Africa.

In the Eastern Cape Province, the poorest province in South Africa, an estimated 30,000 people are cataract blind. The majority of these people have no access to eye care services.

I visited the region recently to view some of the work being done by The Foundation that Fred and I began a year before he died.

During my visit I had the pleasure of spending a few days with one of our patients, following him through the process of having his sight restored.

The day I met Julius, a great big, gorgeous bear of a man, we’d driven for hours along bumpy roads across country surprisingly similar to Australia (eucalypts and all) and I kept finding myself thinking how at home Fred would have felt.

Julius’ community, Lady Frere, is located in the Eastern Cape Province, the poorest part of South Africa. Life expectancy here is low – just 49 years on average. Infant death rates are high. Cataract blindness is prevalent and a third of the population live on less than AUD$2 a day.

Julius shuffled out to greet us when we arrived at the hospital, his hand resting lightly on the arm of his much beloved wife. “When my sight is restored tomorrow,” Julius told me, “I am going to dance with joy.”

It was clear from their interactions that the love and respect between Julius and Nombulela was deep. They were a tightknit family. “She has so many skills,” Julius said proudly of his wife.

“She is my second in command. She looks after the sheep and the goats. When the dogs bark in the middle of the night, she gets up to check on our livestock.”

For all his pride in his wife, I could sense the disappointment and frustration he felt that he could no longer do these things himself.

Julius had been completely blind for almost two years, but his sight had been fading over the past two decades. From the examination I did of him myself, I doubt that he had been able to see much for many years.

He had been referred to the Frontier Hospital in Queenstown in May of 2008, but there were no ophthalmologists available at the time.

Now, The Fred Hollows Foundation had brought out one of the ophthalmologists it had trained in Nepal, Dr. Amar Devja. He had only arrived a few days before, but already he looked at home.

When it came to Julius’ turn, Dr. Devja spoke to him gently, and injected the anaesthetic into his right eye in preparation for surgery. The surgery was set up with a large screen on which the other doctors and trainees could watch the operation and learn.

Just 15 minutes later the operation was complete. An intraocular lens (IOL) from The Fred Hollows Foundation IOL laboratory in Eritrea had been inserted into his right eye. I think Fred would have jumped for joy to see a lens from the factory he had worked so hard to establish.

Twenty years ago lenses like this were prohibitively expensive and it was Fred’s dream to build the Eritrea and Nepal IOL laboratories – to make them affordable and available to developing countries.

I can’t help laughing when I think of Julius’ first words after his bandages were removed. He looked at his lovely wife with adoring eyes and commented dryly, “you had more teeth when I saw you last”.

She giggled adoringly and reached out and held his hand. The joy was written all over her face. She had her husband back. Within moments you could see the confidence being restored to this giant of a man. He stood straighter. Gone was the hesitant shuffle we had seen. But we never saw the dancing he promised. I think the emotion of the moment was too intense.

I am very excited about what we are doing at the Frontier Hospital in South Africa. The greatest challenges to eye health in all parts of Africa are the same as in any developing country. Strengthening human resources is the key to empowering countries to put in place successful eye health services.

With considerable input from The Fred Hollows Foundation, the South African Government is working on these issues by building a new eye health clinic called Sabona. The Government pays the salaries, but the Foundation pays for all consumables, like surgical equipment, gloves and anaesthetics, and the IOLs that are implanted.

Working with the hospital and other health services, we run intensive eye surgery weeks to get through the huge backlog of cases. We also participate in programs of training doctors, eye health workers and ophthalmologists.

Our challenges in South Africa are great. There are 30,000 people like Julius requiring surgery and to reach them, we need to conduct some 15,000 eye operations each year. To do this we will need to raise AUD$1 million this year to fund our sight-saving work.

Whilst the challenges are great, The Fred Hollows Foundation will continue to carry out the work of my late husband so that his dream of eliminating avoidable blindness is realised.

For more information about the work of The Fred Hollows Foundation, go to: www.hollows.org.au.

Gabi Hollows has been nominated by the National Trust of Australia as one of ‘Australia’s 100 Living Treasures’. She was also given the Advance Australia Award for Community Service, and was made Paul Harris Fellow by Rotary International. She is the founding director of The Fred Hollows Foundation. Gabi graduated as an Orthoptist in 1972 from the NSW School of Orthoptics and it was during her training that she first met the late Fred Hollows.