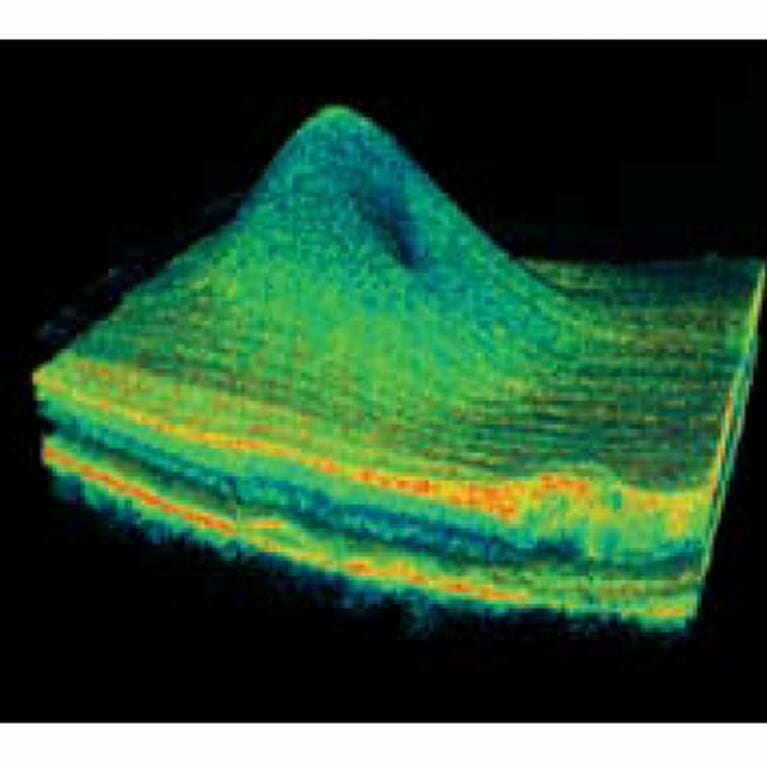 The effect of AMD on quality of life together with the social, emotional and economic impact on families and the community is enormous. The Centre for Eye Research Australia estimates that AMD currently costs the community and government approximately (AUD)$3 billion annually, a figure that will more than double within the next decade.

Age-related macular degeneration (AMD) is the leading cause of irreversible visual loss and blindness in elderly Australians. The most severe vision loss arises from the neovascular, or wet form of the disease, which is less common than the atrophic, or dry form, but is more rapid in onset and progression as well as being more destructive. AMD is the most common visual reason for the elderly to stop reading, driving and ultimately losing their independence.

Angiogenesis has come a long way since the concept was first introduced by Dr. Judah Folkman in 1971 based upon experimental research on rabbit and mouse corneas. Anti-angiogenesis therapy with anti-vascular endothelial growth factor (anti-VEGF) agents has recently taken on a pivotal role in oncology and medical retina therapies. Avastin (Bevacizumab) and Lucentis (Ranibizumab) are two related anti-VEGF agents that have revolutionised the management of wet AMD due to their ability to prevent the growth and leakage of the choroidal new vessels which occur in this condition.

The landmark MARINA and ANCHOR trials showed that treatment with Lucentis was superior to the natural history of wet AMD or treatment with photodynamic therapy (PDT) respectively. Lucentis stabilised vision in over 90 per cent of patients (stabilisation was defined as a loss of less than three lines of vision). Between one quarter and one third of patients gained three or more lines of vision with treatment.

These unprecedentedly good results were achieved using a regime of monthly intravitreal Lucentis injections continued for two years. The PIER study assessed whether Lucentis could be administered less often than every month and still be effective for the treatment of wet AMD. Treated patients received an initial ‘induction phase’ of monthly injections for three months, followed by a reduced frequency of injections every three months for nine months. PIER showed a significant improvement in vision during the initial induction phase of monthly Lucentis injections. However, when patients were switched to a reduced frequency of injections at three monthly intervals, they lost most of the vision gained during the induction phase and on average, returned to their baseline visual acuity. These results were clearly not as good as in the MARINA and ANCHOR in which continued monthly injections led to an overall improvement in vision as opposed to only stabilisation of vision as seen in PIER.

The PRONTO study was a relatively small and uncontrolled study in which patients were treated with an induction phase of monthly Lucentis injections for three months, followed by injections on a pro re nata (prn) basis according to criteria such as a drop in vision, recurrent retinal haemorrhage or increasing retinal thickness (fluid) on Optical Coherence Tomography (OCT). The results of PRONTO were comparable to those achieved in MARINA and ANCHOR, with 82 per cent of patients having stable vision and 35 per cent improving by three lines or more. These results were achieved with an average of 5.5 injections during one year in PRONTO compared to 12 injections per year in MARINA and ANCHOR. Additionally, 17 per cent of patients in PRONTO did not require any additional injections after the initial induction phase of three injections. Despite its limitations, PRONTO had a profound influence on the subsequent development of prn dosing regimes for Lucentis.

Treatment Regimes The majority of ophthalmologists initiate treatment with an ‘induction course’ of three consecutive monthly Lucentis injections. Following the induction course, further treatment is typically administered according to one of the following regimes;

(i) Treat and Observe
Injections are continued every month until the macula is dry i.e. no intraretinal or subretinal fluid can be detected on OCT scanning. Once the macula is dry, treatment is stopped and only restarted if fluid or haemorrhage recurs in the macula. This approach has the advantage of requiring the smallest number of injections which has obvious benefits in terms of cost, convenience and minimising the cumulative risk of treatment related complications such as endophthalmitis. However, this regime potentially carries the greatest risk of permanent visual loss because a recurrence of leakage from choroidal new vessels may lead to irreversible retinal damage with the result that vision lost during the recurrence may not always be recovered when Lucentis treatment is recommenced.

(ii) Treat and Extend
Injections are continued every month until the macula is dry. Once the macula is dry, the interval between injections is gradually extended until macular fluid or haemorrhage recurs. For example, once fluid has resolved with monthly injections, the next injection would be scheduled five weeks later, then six weeks later then seven weeks later and so on, until macular fluid recurs between injections. The injections are then administered at intervals such that macular fluid or blood does not reappear between injections. This interval is known as the ‘fluid free interval’ and typically appears to be relatively constant for any particular patient. The advantage of this strategy is that it may be a convenient and cost-effective way to individualise therapy whilst minimising the risk of a prolonged recurrence of macular fluid. The disadvantage of this method is that it has not yet been proven in large randomised clinical trials and it may carry a risk of visual loss occurring when the macular fluid recurs. A common observation in the retinal clinic is that when patients lose vision during a period of poor clinic attendance (e.g. due to an intercurrent illness or overseas travel), the lost vision may not always be recovered following resumption of Lucentis treatment.

(iii) Monthly treatment
Injections are continued every month regardless of whether fluid or haemorrhage is present. This was the approach used in MARINA and ANCHOR. The advantage of this paradigm is that it is currently considered to be the gold standard of treatment because it is the only regime supported by evidence from large randomised controlled clinical trials. The disadvantages are that this approach carries the greatest treatment burden for patients and doctors as it is the most intensive in terms of monitoring, treatment and cost.

The authors prefer to adopt a variety of these treatment regimes, tailored to the individual patient following an informed discussion of the various options. No two patients are identical and factors such as ability and willingness to attend for frequent follow-up, patient preference, physician preference, financial circumstances, general health, visual acuity, unilateral or bilateral involvement, and previous response to treatment are all important in the decision making process.

An alternative strategy developed to reduce the burden of monthly injections includes the use of combination therapies involving anti-VEGF agents with photodynamic therapy (PDT) and intravitreal steroids. Trials have shown that combination therapy may reduce the number of injections, but PDT can be associated with severe visual loss due to induced choroidal ischaemia and it is unclear whether the visual outcomes of combination therapy can match those of Lucentis monotherapy. The results of the large ongoing SUMMIT series of trials looking at combination treatment with Lucentis and PDT are awaited and will clarify the potential benefits of this approach.

Avastin has a longer half life in the vitreous as it is a bigger molecule than Lucentis and thus may be longer acting. Many clinicians have an impression that the efficacy of Avastin is longer than that of Lucentis. However, Avastin does not currently have Medicare approval for intraocular use. The Comparison of AMD Treatments Trials (CATT) is currently underway in the United States. The results of this head to head comparison of Avastin and Lucentis are eagerly awaited by retina specialists throughout the world.

VEGF Trap-Eye is a super-charged anti- VEGF agent with fused VEGF receptor proteins on one arm of the molecule giving it a binding affinity for VEGF that is 140 times greater than Lucentis. VEGF Trap-Eye has a longer half life in the rabbit vitreous than Lucentis and modelling studies predict biological activity in the human vitreous persisting for between 73 and 87 days following intravitreal injection depending upon the dosage given. This has the enormous potential to enable the use of lower drug concentrations with longer treatment intervals between injections.

The CLEAR-IT 2 study of VEGF Trap- Eye for wet AMD recently reported promising results in a group of 157 patients randomised to treatment with various doses of VEGF Trap-Eye at varying injection intervals. The results showed that patients receiving 2mg of VEGF Trap-Eye monthly for three months then prn required an average of 4.6 injections over 12 months with visual results that compared favourably with MARINA and ANCHOR.

VIEW 2 is a large international randomised, controlled clinical trial comparing the efficacy and safety of VEGF Trap-Eye with Lucentis. The results of the trial will demonstrate whether less frequent treatment regimes with VEGF Trap-eye will be more beneficial than the more frequent treatment regimes of Lucentis. Dr. Simon Chen and Dr. Jeff Friedrich are currently enrolling patients for this study at Vision Eye Institute, Chatswood in New South Wales.

The recognition of a drop in the visual acuity of many patients being treated with prn regimes has led some clinicians to favour regular monthly injections over prn regimes and this may result in a pendulum swing towards more frequent monthly dosing with Lucentis. Alternative approaches to reducing the burden of treatment such as combination therapies and VEGF Trap-Eye are being investigated. Presently however, the question of “is more better than less?” not only in terms of injections but in terms of follow up remains unanswered.

Dr. Jeff Friedrich is a General and Medical Retina Ophthalmologist practising at the Vision Eye Institute in Chatswood and Cremorne, NSW. He specialises in intravitreal therapies for age related macular degeneration and retinal vascular diseases.
Dr. Simon Chen is a Retina Specialist at the Vision Eye Institute in Bondi Junction, Chatswood, Drummoyne and Hurstville in NSW. His areas of expertise are Medical and Surgical Retina with a particular interest in intravitreal drug treatments for age related macular degeneration and sutureless retinal surgery for retinal detachments, epiretinal membranes and macular holes.