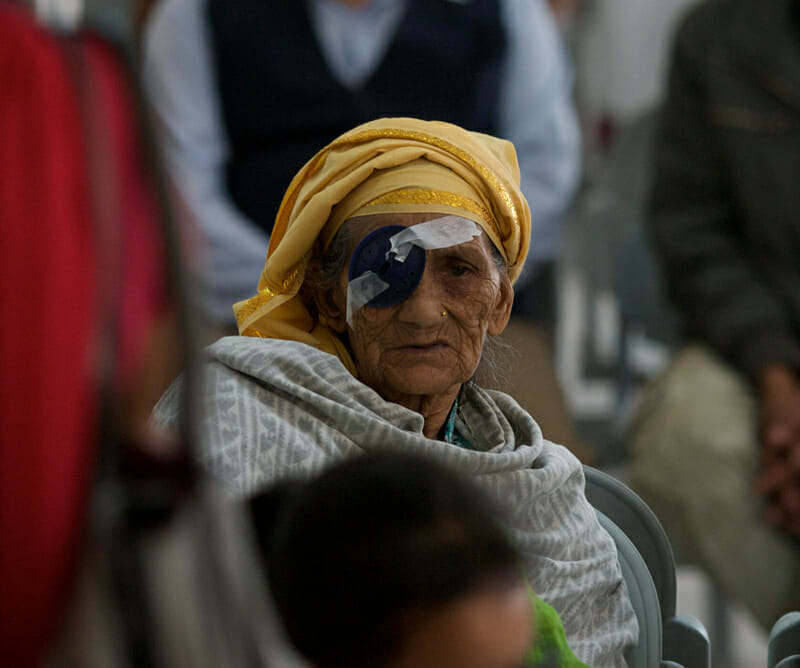 The Story of Tilganga Eye Centre, Nepal, On 30 April this year, Gabi Hollows helped open the Tilganga Institute of Ophthalmology in Kathmandu, Nepal. This event marked the completion of Tilganga’s transition from an outpatient eye care facility to an international standard, tertiary level eye care hospital which will improve eye care in the Himalayan region. The Fred Hollows Foundation has been partner to Tilganga Eye Centre since 1994.

When I was last in Nepal in 1994, it was just one year after Fred’s passing and the Tilganga Eye Centre story was only just beginning. I saw the first surgical theatres being operated in and I helped open the Fred Hollows Intraocular Lens Laboratory.

To see Tilganga today – what it has achieved and what we know it can accomplish, is just extraordinary. The numbers are staggering. Since 1994, over 1.2 million outpatients have walked through the doors of Tilganga and nearly 70,000 patients have undergone surgery.

The centre has trained over 2600 personnel, published 31 research publications and is now responsible for over 50 per cent of ophthalmic outreach programs in Nepal.

The Fred Hollows Intraocular Lens Laboratory within the building has manufactured well over two million sight-saving lenses for export to over 70 countries, bringing cataract surgery within the reach of those in the developing world.

Just as Fred demanded, these low-cost lenses are of the highest quality and I know if he had the chance to hold one of these lenses in his hand, he would have been proud.

Realisation of a Dream

Fred and I first came to Nepal with the World Health Organisation in 1985 and that is when we first met the inspirational Dr. Sanduk Ruit. Fred and Dr. Ruit shared a determination to bring modern eye health services to Nepal. They both pushed boundaries and demanded results and their combination was always going to give us an enduring and powerful legacy.

I remember when Dr. Ruit was training in Australia with Fred, he was living at our home in Randwick, Sydney. We would all sit around the dinner table, discuss our big ideas and imagine the possibilities. At that time these were only ideas. They were big, bold and ambitious ideas, but they were still a long way from reality. This is what makes Tilganga and the new Institute of Ophthalmology so remarkable. It has taken a lot of will and commitment to make this possible.

The new chapter of the Tilganga story began this year on 30 April where I had the privilege of representing The Fred Hollows Foundation at this very special event.

The new facility was inaugurated in a special ceremony attended by Nepalese Prime Minister Pushpa Kamal Dahal, in what would be one of his final public appearances before stepping down as leader. The Fred Hollows Foundation is proud to say that we’ve been there supporting Tilganga from the start.

Over 600 people line up outside Tilganga each day hoping to receive eye care. Tilganga’s new Institute of Ophthalmology is a huge expansion on the existing ophthalmic services.

The new centre will at least double the existing capacity of Tilganga – to provide eye health services to the people of Nepal. These services spread well beyond Tilganga’s home in Kathmandu, but also into some of the most regional, remote parts of Nepal where the vast majority of the Nepali population live, but where there are very limited health services.

Tilganga has also become an important centre of learning for doctors, ophthalmic assistants and community health workers – not only from Nepal, but from countries all over the world including North Korea, Afghanistan and Myanmar.

The largest challenge any of us have in eliminating avoidable blindness by the year 2020 is in the area of human resources. Tilganga is therefore critical to meeting this challenge and I believe Fred would be blown away by this.

The success of Tilganga has only come about through the hard work and dedication of those people involved in building and running the centre. They have turned the vision of a few into a source of national pride in Nepal.

Equally, I need to acknowledge a group of people who have probably had as much to do with the realisation of Tilganga and The Fred Hollows Foundation’s work in Nepal, as any group or individual.

Our supporters and donors in Australia have contributed millions of dollars over the years to help us with our programs in Nepal.

These supporters are everyday Australians who trusted Fred and his Foundation with their donations, knowing that the money would be spent in a worthwhile way.

For all of those people who have donated to us in the past I can tell you that you can be proud of what we’ve been able to achieve at Tilganga and that each day hundreds of people in Nepal receive quality eye care because of your support.

At the end of my speech at the inauguration, I closed by telling the crowd that I felt Fred’s presence within the walls of Tilganga. I say this because I can sense so much of Fred in the attitude and in the spirit of the Tilganga family (as I like to call them).

I am proud of what we’ve all been able to achieve in Nepal and because of this first class facility, thousands of Nepalis each year will be given the gift of sight, dignity and hope.

The Fred Hollows Foundation’s Nepal Eye Program’s contribution to blindness treatment and prevention is a collaborative effort with the Tilganga Institute of Ophthalmology (TIO). Tilganga is independent from The Foundation and has partnerships with several non-government organisations including the Himalayan Cataract Project.

Gabi Hollows has been nominated by the National Trust of Australia as one of ‘Australia’s 100 Living Treasures’. She was also given the Advance Australia Award for Community Service, and was made Paul Harris Fellow by Rotary International. She is the founding director of The Fred Hollows Foundation. Gabi graduated as an Orthoptist in 1972 from the NSW School of Orthoptics and it was during her training that she first met the late Fred Hollows.