A Sight for Small Eyes 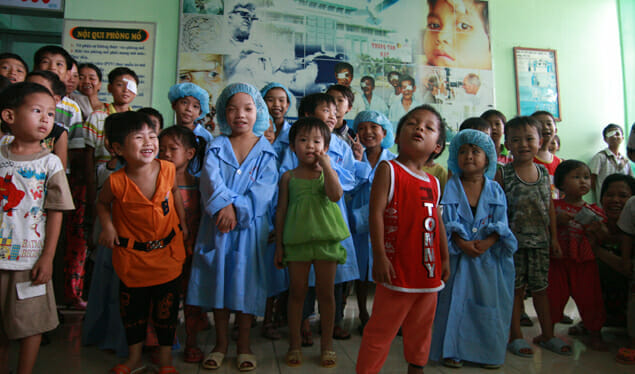 Vietnamese Minister of Planning and Investment, Vo Hong Phuc, recently named his three top remarkable activities which highlight the support of Australian people to Vietnam. They were the building of My Thuan Bridge (in the Mekong Delta); the training of Vietnamese pilots and the cataractsurgeon- training initiated by the late Professor Fred Hollows. Today, The Fred Hollows Foundation continues his work.

It Started with Fred

When Fred Hollows arrived in Vietnam in 1992, he famously remarked to those who asked him why it had taken so long for him to get there: “better late than never.”

Fred had spent previous years working on the eye health of Indigenous Australians and also developing programs in places like Eritrea and Nepal.

Fred understood that treating cataract blindness was the key to addressing up to 50 per cent of avoidable blindness in the developing world. When he spoke to over 300 doctors at the VietnamNational Institute of Ophthalmology in Hanoi, he asked how many of them knew how to treat cataract? In a country with approximately one million patients requiring cataract surgery, just two doctors possessed these necessary skills.

The World Health Organisation estimates that up to 60 per cent of children in developing countries die within a year of becomng blind, so the Sight For Children campaign is literally giving back hope to the children of Vietnam.

Fred made a commitment on that day to train these 300 doctors. Fred’s offer had given ophthalmologists in Vietnam hope that they too could gain the skills many of them saw as a life-long dream.

By June 1992, Fred was back in Australia receiving radiation treatment for cancer. After a very close call and weeks of recovery, Fred checked himself out of hospital and almost immediately returned to Vietnam to begin training Vietnamese surgeons. On 10 February 1993, Fred passed away.

In her role as Founding Director of The Fred Hollows Foundation, Gabi Hollows returned to Vietnam just six weeks later to re-assure the Vietnamese that their training would continue. Fred’s promise remained The Foundation’s promise.

Today, Fred’s legacy in Vietnam lives on through the work of The Fred Hollows Foundation. Vietnamese surgeons now complete over 120,000 cataract operations annually. Much of this progress can be traced back to Fred’s initial steps and his vision for eye health in Vietnam.

Approximately 23,000 children in Vietnam are bilaterally blind. With a lack of paediatric ophthalmology services outside of its major cities, treating this level of childhood blindness presents a great challenge. To begin addressing this problem, The Fred Hollows Foundation has set up a unique program in Phu Yen province aimed at treating children and at the same time build the capacity of local provinces to provide these types of services.

Before the Sight For Children program launched in Phu Yen, one of Vietnam’s poorest provinces, children would need to travel up to 12 hours to reach the nearest eye care services, in Ho Chi Minh City. The expense of such a journey, together with the cost of surgery itself, meant that most children could not afford operations. The World Health Organisation estimates that up to 60 per cent of children in developing countries die within a year of becoming blind, so the Sight For Children campaign is literally giving back hope to the children of Vietnam.

Working closely with the Vietnam National Institute of Ophthalmology (VNIO), the program was launched in 2006 and coincides with Vietnamese school holidays. Since then, the weeklong surgery sessions have continued once a year, treating problems such as strabismus, ptosis and cataract.

In the last three years, over 250 children have received essential eye surgery – and just as importantly, local doctors have completed training and can now operate on children without assistance from VNIO’s surgeons in Hanoi.

In mid 2009, the successful model was replicated in neighbouring Binh Dinh, a province double the population Phu Yen. The result of this expansion saw a further 120 children receive life changing surgery.

The true success of the Sight For Children campaign can be seen through the stories of individual children who have undergone complete transformations after receiving sight restoring surgery.

Nine-year-old Malo is a child of the Ba’na people, one of 53 ethnic minority peoples that live mostly in the more remote areas of rural Vietnam. He was born was congenital cataract in both of his eyes. His condition meant that Malo had to squint in the sunlight. If he opened his eyes any wider, light would flood in and hit the cataracts in the centre of his eyes. The light was then refracted and an explosion of light bounced around his retina.

As a result, Malo spent most of his time indoors, away from his mother who works in the fields. Although he tried very hard, Malo’s schooling had suffered a great deal and in Vietnam, a child without education has very little hope of escaping the poverty cycle.

Malo received cataract surgery on both of his eyes during the 2008 Sight For Children campaign at Phu Yen Eye Clinic.

Six months after his operation, Malo’s life had changed a great deal. For the first time he was able to play by the river with the rest of his family during the Vietnamese Tet festival. Malo is attending school and his teachers tell us that he is progressing very well.

Malo’s story is one example of how Fred’s initial vision for Vietnam – to provide local surgeons with training so that all Vietnamese people have access to eye health services regardless of their wealth or geographic location – is continuing to have a positive impact, even 16 years after his passing.

For more information about the Sight For Children campaign or to support The Fred Hollows Foundation see: www.hollows.org.au or phone: (AUS) 1800 352 352.

Andy Nilsen is passionate about advancing eye health to indigenous communities. He is the former adviser to former State NSW and Federal political figure, The Hon. Bruce Baird and now works for The Fred Hollows Foundation.