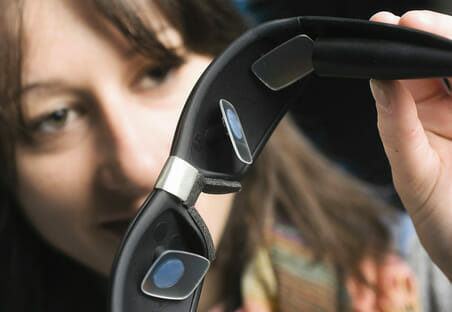 Star Trek’s Lieutenant Commander Geordi La Forge wore a prosthetic trademark VISOR to help him ‘see’ much of the electromagnetic spectrum. Australian researchers, working on two different projects on opposite sides of the globe, are working to turn that science fiction into reality, with the development of ‘smart specs’ that will augment a user’s vision: one uses smart phone technology, while the other is banking on the interplay between gold nanoparticles and laser light.

Optical researchers worldwide are feverishly working to develop the first fully functioning bionic eye, and there’s no doubt that such a device – whatever form it takes – will radically transform the lives of the eventual recipients.

Many of the bionic eye projects, however, are likely to require retinal implants. All well and good if the patient is fit enough to withstand the gruelling surgery, and young enough to justify the significant cost. But for those who don’t have the physical stamina – or the financial resources – Australian ingenuity may have an answer.

Australian neuroscientist Dr. Stephen Hicks, working in the UK, has been piggybacking on the remarkable developments in smart phone technology to develop glasses that will augment a patient’s vision. Meanwhile, in Melbourne, Swinburne University is laying the foundation for a new approach to stimulate optical nerves, again using specially designed spectacles.

Depression is a huge problem for people who are registered as blind, but this would give them the chance to shop, to catch public transport and to meet friends and alleviate the potential for depression

Stephen Hicks is the first to admit that his research is built on the work of others – he’s just piggybacking on the millions of research dollars poured into mobile phone technology.

Smart phones have given us a powerful pocket-sized computer with a long battery life and tiny cameras – all of which will be fitted to Dr. Hicks’ ‘smart specs’, alerting the wearer to objects in their surroundings using bright lights.

“One of the reasons we’re able to do this work is that other people are coming up with very clever cameras and programs such as Facebook, and we’re just adapting it,” Dr. Hicks told mivision from his office at the Nuffield Department of Clinical Neurosciences, at Oxford University.

He said the ‘smart specs’ would have an advantage over retinal prosthetics because they would be cheap to produce, and wouldn’t require invasive surgery.

“I’m a strong believer that this technology should be accessible. I don’t know how much it will cost but, because the parts are cheap, I can make prototypes for about AUD$800.

“One of the problems with prosthetics is only the youngest and healthiest can participate – it is very invasive and as you get older, surgery gets quite dangerous.”

Dr. Hicks said the spectacles would be ideal for elderly people with macular degeneration, who see objects as a blur but cannot focus, see much colour or make out specifics.

Dr. Hicks said cameras attached to the rim of the glasses capture information about the distance and dimension of objects. This information is then sent to a portable computer, which interprets the shape as light: the brighter and bigger the light, the closer and larger the object.

“It’s quite a strange experience – it is quite a novel way to see,” said Dr. Hicks, who is currently conducting laboratory-based tests, with the aim of testing “in real world environments” early next year.

For patients with some colour vision, different colour lights could be used to distinguish between stationary and mobile objects, Dr. Hicks said.

He envisages the glasses eventually being able to read bus numbers and signs, with the information synthesised into a voice and played into the wearer’s ear.

“The main aim is to improve the independence and quality of life of people who are legally blind.

“Depression is a huge problem for people who are registered as blind, but this would give them the chance to shop, to catch public transport and to meet friends and alleviate the potential for depression.”

He said, eventually, the technology may be sufficiently developed to enable facial recognition of a limited database of people.

“People tell us that when they walk up to a group of people, they want to be able to identify the people that they know in that group. So potentially we could link (the spectacles) to software on something like a Facebook database, so you can identify people you know in a crowd.”

Dr. Hicks anticipates that once outside testing begins, it will be only a couple of years before industry partners are sought to commercialise the glasses. Again, he is relying on improvements in mobile phone technology to further benefit the device.

“Battery life is very important if people are to rely on these glasses for independence and safety. For example, we wouldn’t be advising people at the moment to cross the road, it will require quite some testing before that happens.

“The computers we have now (running smart phones) are almost sufficient and they are working on getting a longer battery life. The phones we will have in three years (when the glasses are expected to be available) will make the current phones look like old Nokia bricks,” he said.

While Dr. Hicks’ project takes advantage of technological advances made by others, researchers at Swinburne University are breaking brand new ground with their project, which is looking at a non-contact method of stimulating nerves.

The University’s Professor of Biointerface Engineering, Sally McArthur, said the research was still in its foundational stages and several years away from
animal trials.

The research is being driven by PhD student Chiara Paviolo under the supervision of Professor McArthur and Dr. Paul Stoddart. It is a cross-disciplinary research effort, involving the biointerface engineering and biomedical engineering groups within the Industrial Research Institute Swinburne (aptly known as IRIS), and the Brain and Psychological Sciences Research Centre at Swinburne, which was providing the visual neuroscience expertise through Professor David Crewther.

According to Ms. Paviolo, the new concept explores the potential for light to deliver far more precise nerve cell stimulation than electrodes.

“Electrodes need an electrical current and so they consequently stimulate a group of nerves,” Ms. Paviolo said. “Light, however, allows us to target individual nerves and this should mean more accurate communication of optical signals – an essential outcome if the information delivered to the brain via a prosthesis is to mean anything useful in terms of shapes, colours, dimensions. You don’t just want optical ‘noise’.”

The initial goal is to successfully bond the nanoparticles to the nerve and then achieve a response to light heat.

Gold nanoparticles are being used because gold is inert, biocompatible and has plasmonic (light-responsive) properties. The gold nanoparticles can also be fabricated to respond to different wavelengths, making the interface controllable.

Professor McArthur said one of the main challenges being faced by the team was to develop nanoparticles that are “thermally stable”. To measure and control the heat, the Swinburne team is building a molecular thermal sensor to measure how much heat is produced, so they can then work out how to control it.

“While on one hand heat is necessary, it also has to be limited to avoid damaging cells. Laser heat has long been used in medicine to deliberately kill tissue, but in this instance the opposite result is sought.”

The nanoparticles used in the project are being produced at Swinburne by Another PhD student, Jiawey Yong. Professor McArthur said the aim is to inject these nanoparticles into the eye.

They would be designed to, either chemically or biologically, seek out and attach themselves to optic nerves. The nanoparticles would then act to amplify laser light.

“This is an important initial step because it means we only need a very low intensity laser source to generate the right amount of heat required to elicit a response from the nerve cells without damaging them.

“From a functional perspective, this means we can use an external source of stimulation (for example, a tiny laser device fitted within a pair of spectacles) rather than the conventional electrode approach.”

“If you’re familiar with Star Trek, there’s a character Geordi who has a visor that wraps around his eyes and enables him to see, even though he was born blind. The wrap-around glasses have everything built in with some sort of processor behind it… it is something similar to what we’re trying to achieve, with a tiny laser device fitted within glasses.”

Professor McArthur said the advantage of an external source of stimulation from spectacles over a conventional electrode approach is safety.

“It takes away all the risk. We can’t be shining dangerous lasers into people’s eyes. The work ahead of us is to determine the type and strength of laser light needed to penetrate the eye and other tissue, and then, on reaching the nanoparticles that coat the nerve cells, to create a heat stimulant,” Professor McArthur said.

“There’s still a lot of fundamental biology to work out. For example, how does the heat stimulate the nerves? Does it do so directly? Is it a biochemical response?”

Professor McArthur said the project had been slowed by the lack of external funding and animal trials were still four to five years away. However, she expects that human trials would occur quite quickly afterwards, because of the non-invasive nature of the device.

She said the researchers expected to be able to test their device on subjects that are not visually impaired, helping them develop a greater understanding on how signals get to the brain.

She added that the most likely application for the vision prosthesis were people who had lost their sight through retinitis pigmentosis or macular degeneration – both diseases where the nerve is still alive and where patients may have some residual vision.

Professor McArthur said another exciting aspect of the research is that the fledgling technology could have a much wider potential – to help restore sensation to damaged nerve endings in any part of the body, enabling people with, say, a prosthetic arm or leg to feel sensation again.

“For example, microsurgery can now rejoin a severed nerve, but not when too much tissue is missing. Using nanoparticles and tissue engineering we believe we will be able to build molecular constructs that are able to fill the gap between severed nerve ends…

“The first task is to demonstrate proof of concept … we’re fairly comfortable that the principle and the idea will work… there is a lot of work ahead of us, but the potential rewards in terms of progressing medical science and helping people recover from extreme trauma, including blindness, are immense,” Professor McArthur said.