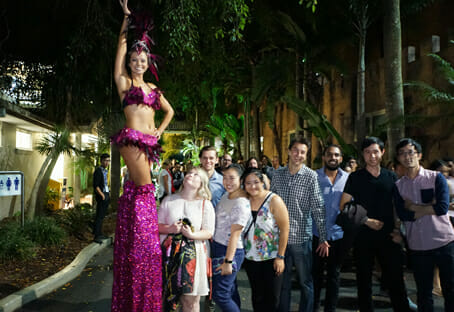 Australian Vision Convention (AVC) was huge success over the first weekend of April, with over 450 people participating in workshops, presentations and networking opportunities at the Marriott Hotel on the Gold Coast.

By all accounts, exhibitors, delegates and organisers were thrilled with the educational content and new venue for AVC.

Optometrist Narelle Hines, a Queenslander who now practises in Sydney, best summed it up, saying “I’ve never been disappointed at AVC – it’s a favourite. I think they have a great program every year and I love the relaxed format.” Speaking of AVC’s workshop program, Ms. Hines said, “optometrists generally love the hands-on workshops because this is what they come for; real solid take home messages they can use in the clinic the next week. Most optometrists have some techniques that they would like to refine and the workshops allow us to do that.”

A hands-on workshop, entitled ‘the Fellowship of the Rust Ring’, presented by Dr. Lindsay McGrath and Dr. Braden Meiklejohn, enabled optometrists to practise removing a foreign body from a model of an eye.

Dr. Lindsay McGrath explained that a new item number had recently been released for foreign body removal, which was expected to lead to an increase in the number of optometrists providing this service.

Dr. Braden Meiklejohn said a high volume of foreign body removals were performed in the hospital environment, resulting in pressure on resources. “If we can use practitioners in the community to perform these procedures we will free up resources in the hospital and patients will be provided with a much faster service; so everybody benefits.”

Dr. McGrath said optometrists should not be afraid to have a go at removing foreign bodies because they have excellent slit lamp skills and are very competent. However, she cautioned that they should be prepared to refer on should they need to.

Delegate Nicole Arnold from Queensland said she occasionally removed foreign bodies and, having attended the workshop, felt better equipped to take on more cases. Rebecca Lovejoy, also from Queensland, said the workshop enabled her “to get a feel for removing foreign bodies and in the process I was also able to listen to the tips given to other people as they had a go as well”.

Dr. Joanne Wood presented two lectures at AVC; the first on visual anomalies in children that can impair vision function and impact learning. This in turn, she said, can affect long term health and social outcomes. Dr. Wood said up to 40 per cent of school-age children have some form of visual anomaly that can affect visual acuity, however, not all children are identified in standard visual screening programs because many visual anomalies do not result in reduced distance visual acuity.

Dr. Wood said an understanding of children’s learning environments and, therefore, the demands on visual acuity was essential to develop an evidence-based approach to screening and treatment.

Greg Johnson, former CEO of Optometry Queensland was at AVC to represent the Essilor Institute. He said AVC was an excellent opportunity to introduce the new concept to optometrists and to engage them in volunteer screening programs that were due to commence in Toowoomba the following week. Having launched Essilor Institute in Australia in January, Mr. Johnson said the program had already attracted interest from health and Indigenous ministers around the country as well as schools.

Peeps was also at AVC to introduce a new product, a lens cleaner with an invisible carbon compound that, as Tom Nichol and Brent Rundle from Optica demonstrated to me, completely cleans fingerprints and oils from lenses. The duo said exhibitions like AVC provide a valuable opportunity to build brand awareness and attract new business. “We did SRC and had great interest in our products here which is why we came to AVC. We will gauge the response from here and that will determine where we go next.”

Contact Lens Centre Australia (CLCA) was at AVC to introduce Oculocin, a natural anti-inflammatory and anti-bacterial product for dry eye relief. “AVC has always been great, the concept of being in a hotel with the workshops right here, alongside the exhibitors, works for us, it’s a good solution,” said Mr. Sid DeBeer. He said SRC had also been “fantastic” and that CCLA would be at SILMO and ODMA 2017. “It’s a flag flying scenario, it’s about seeing clients and supporting the industry is extremely important.” Mr. DeBeer said. CLCA attends optometry, GP and nursing exhibitions each year, all of which were important to the business, he said.

Philip Spork, founder of MD Eyes, was at AVC for the third consecutive year, having launched his product at AVC in 2014. He said AVC provided an excellent opportunity to update clients on changes, obtain feedback and meet new prospects. “It’s also good to see graduates here, because of course they are the next generation,” he said.

Jim Colley and Karen Harmsen, both business coaches from Provision, said exhibitions like AVC were essential educational opportunities that enabled the organisation to update existing members on services and meet potential members.

“Exhibitions are a big commitment but it is vital that we get out there and promote what we are doing for independent optometry,” said Mr. Colley. Ms. Harmsen added, “15 years ago, the perception was that we were a buying group… now we are so much more than that. Our whole purpose is to help people stay independent, to grow their practice and their vision”.

A Fixture on the Calendar

Harvey Bay optometrist Richard Watt was pleased to be back at AVC. “For many years I have taken an apartment on the Gold Coast for a week, brought my wife and children along and made AVC part of our family holiday,” he said.

Ms. Hines said the social aspect of AVC was as important as the educational program. “AVC is where I catch up with old friends. A lot of my classmates still come along. If I had my way I would like to get more people to understand that there is some value in just standing and talking with people as well as going into the conference rooms and workshops,” she said.