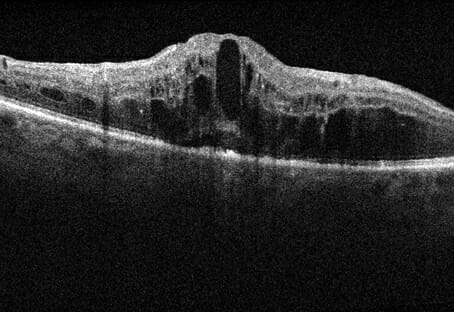 Many types of lasers have been used over the years to treat diabetic eye disease, however increasingly, ophthalmologists are turning to intravitreal anti-VEGF injections. Presented here is a summary of findings and applications from studies into the treatment of diabetic macular edema in Protocols I and T and proliferative diabetic retinopathy in Protocol S.

The treatment of diabetic retinopathy was revolutionised in 1949, when Meyer-Schwickerath reported using an optical contraption that extended from the roof of his clinic down to his operating table in order to be able to capture the energy of the sun and direct it to the retina; he used retinal photocoagulation to treat retinal tears as well as diabetic retinopathy. Once the laser was invented in 1963, it was rapidly taken up by ophthalmologists and has been used for both non-proliferative and proliferative diabetic retinopathy. The use of lasers became the gold standard treatment following the Early Treatment of Diabetic Retinopathy Studies started in the 1980s; these demonstrated that, for the first time, an intervention by ophthalmologists could result not only in the prevention of blindness and severe vision loss, but also sometimes improvement in vision too.

Many types of laser have been employed over the decades, with varying wavelengths, spot sizes, pulse durations and patterns of application; techniques have improved such that the rates of complication, visual loss and failure of laser treatment have dropped significantly. While laser treatment is undoubtedly effective in reducing diabetic macular edema (DME) and preventing significant visual loss from proliferative diabetic retinopathy (PDR), retinal photocoagulation is, by its very nature, a destructive process that results in scotomata, loss of visual field, reduced visual acuity and significant glare in many patients. More recently, attempts have been made to limit the destructive effects of laser therapy by using ultra-short pulse treatments that do not damage photoreceptors. These, however, can be difficult to apply reproducibly and their efficacy in proliferative diabetic retinopathy has yet to be established.

Although there has been much conjecture about the mechanisms by which laser photocoagulation works, there is consensus that the molecule responsible for many complications of diabetic retinopathy is vascular endothelial growth factor (VEGF). Inevitably, the role of anti-VEGF injections has been investigated and recent publications by the diabetic retinopathy clinical research (DRCR) network have resulted in the most significant paradigm shift in the treatment of diabetic eye disease in over 65 years.

The DRCR network, established in 2002, has taken over the mantle of the Early Treatment of Diabetic Retinopathy Study (ETDRS) group in the intravitreal injection era; its three most significant recent studies have addressed the role of intravitreal anti-VEGF injections in the treatment of diabetic macular edema (DME) in Protocols I and T and proliferative diabetic retinopathy in Protocol S. Protocols I and T have already resulted in the Pharmaceutical Benefits Scheme (PBS) approval of ranibizumab and aflibercept in the treatment of DME in Australia. Some retinal specialists are already, albeit off-label and judiciously, also applying the findings of protocol S to Australian diabetics. This article is a summary of the findings and applications of these studies.

Protocol I, published in 2010, was a randomised study looking at ranibizumab and triamcinolone in the treatment of centre-involving diabetic macular edema, either with focal or grid laser treatment at the onset of treatment or laser deferred by at least six months. The term centre-involving is now used instead of clinically significant macular edema (CSME) because it is more easily defined with the use of optical coherence tomography (OCT) and is less open to interpretation. Indeed, CSME often doesn’t worsen or, at least fluctuates without affecting the fovea or vision when watched with serial OCT scanning – the ability to watch more closely and precisely has allowed many patients to avoid focal laser treatment.

The premise that led to Protocol I was the commonly held belief that if focal/grid laser were applied at the commencement of injections, a reduced number of injections may be needed and that any visual improvement and reduction in DME might happen faster. There was also already a significant experience base, if not level 1 study-based evidence, that bevacizumab, an off-label anti-VEGF, was effective in treating DME.

Intravitreal triamcinolone was also investigated because a body of opinion held that steroids not only resulted in reduced injection numbers, but that there might be an additional benefit through their anti-inflammatory effects. With respect to steroids, the pertinent findings were that, while fewer injections were definitely required, the visual outcome was poorer in this group, with the exception of those who had already had cataract surgery beforehand. In those subjects who had not previously had cataract surgery, the rate of cataract surgery was fairly high and, even if DME was not exacerbated by the surgery, the visual outcomes were worse. Overall, Protocol I may have rung the death knell for intravitreal triamcinolone as a primary choice of drug in DME.

Important five-year findings of the Protocol I study with respect to ranibizumab were as follows:

Following the publication of Protocol I, many retinal specialists around the world adopted the use of intravitreal anti-VEGF injections for the treatment of centre-involving DME. There is some difference in practice when it comes to treating CSME; some have largely spurned the use of focal or grid laser and often monitor patients to see whether non-centre-involving DME progresses to affect the foveola and then start injecting if it does. The rationale behind this approach is that not all CSME becomes centre-involving and that the reduced visual benefit from prompt laser in Protocol I may have related to the destructive nature of conventional laser photocoagulation. However, others still treat CSME that is not centre-involving with laser, arguing that this reduces the need for injections and their inherent risks. There has been no study to date comparing these two approaches.

Another additional, albeit welcome, decision facing retinal specialists has been the choice of drug following the availability of aflibercept. Compared to ranibizumab, aflibercept has a greater affinity for VEGF, binds VEGF-B as well as VEGF-A, and has an additional anti-placental growth factor action. The purpose of Protocol T was to compare the efficacy and safety of bevacizumab, ranibizumab and aflibercept in DME treatment, all with deferred laser as an option.

Important two-year findings of the Protocol T study were as follows:

The one year results of Protocol T allowed retinal specialists to make their choice of drug for DME with mild visual loss (VA 6/9 – 6/12) on the basis of personal experience and preference, perceived benefit and cost to society. In spite of the benefit of aflibercept to patients starting at 6/15 or worse, some applied the same approach, believing the few letters of difference in benefit between the drugs either to be of little pragmatic significance or insufficient to warrant adoption of aflibercept or ranibizumab over bevacizumab. At two years, the lack of statistical difference in visual and macular thickness outcome between aflibercept and ranibizumab and slight reduction in need for laser may have reinforced that argument.

With about 330,940 intravitreal injections (MBS statistics for item number 42738) being given for all indications in 2015, the financial burden to society is not only large, but increasing rapidly. The cost to the Australian government of aflibercept and ranibizumab is approximately $1,400, but bevacizumab is $0 as it is only used off-label and not on the PBS. To date, the choice of the more expensive drugs has been driven by there only being level one evidence available for them, concerns about the use of off-label drugs and the belief that they may be safer. The cost of bevacizumab (~$50) is fully incurred by patients; it is perversely more expensive for them than the PBS-listed drugs (maximum prescription cost of $36).

The issue of cost to society will also be central to the use of intravitreal injections for proliferative diabetic retinopathy and any decisions about PBS-listing following the results of Protocol S are likely to be more difficult and require much more follow-up than the two years available to date. This study was designed to look at the efficacy and safety of intravitreal ranibizumab in the treatment of proliferative diabetic retinopathy, compared with pan-retinal (scatter) laser photocoagulation (PRP).

Important findings of the Protocol S study after two years were as follows:

Ranibizumab is currently neither TGA-approved nor PBS-listed for the treatment of PDR. Application of this protocol to Australian clinical practice would therefore be limited by cost to the use of bevacizumab, with the assumption of near or equivalent results. However, there are several other factors to be considered before adopting Protocol S in everyday clinical practice, relating to the progressive and blinding nature of PDR and the risks associated with inadequate compliance. Indeed, fully informed and understood consent is vital, coupled with tight systems for ensuring that patients attend follow-up. Without both, the risk of inadequate compliance is that any early benefits gained by intravitreal injections may be completely overturned by the worsening of retinopathy due to a failure to attend for either follow-up or treatment. Failing to take the opportunity to perform full PRP at the earliest point in such circumstances may have disastrous consequences. We know that PRP works, even if further treatments are often required (45 per cent in this study), whereas there are no data on the long-term outcome of cessation of intravitreal ranibizumab follow-up and treatment.

Given the extensive comorbidities and poorer socioeconomic state of patients with advanced diabetes and the tyranny of distance in Australia, it is likely that a high proportion of those eligible for treatment according to Protocol S will end up with PRP instead. Whether this is a missed opportunity or a lucky escape remains to be seen with longer term follow-up. Certainly, at this juncture, the role of intravitreal anti-VEGF injections in the management of diabetic retinopathy is fully established for DME, if not PDR.

A secondary benefit of intravitreal anti-VEGF injections that may even end up being an indication for treatment in the future for some patients is related to the reversal of diabetic retinopathy level found in all the protocols discussed here. In Protocol I there was a two-step regression of retinopathy level in 28 per cent of those treated with ranibizumab, but there are no data to identify those most likely to benefit. Indeed, whether this imparts any long term advantage or not also remains to be seen in very long term follow-up studies.

Dr. Devinder Chauhan is a retinal and macular specialist with 15 years’ experience in the treatment of retinal disease. He studied medicine at Guy’s Hospital Medical School (University of London), qualifying as a doctor in 1989. Having trained as a junior neurosurgeon and cardiothoracic surgeon, he underwent most of his junior training in ophthalmology at St Thomas’ Hospital. Dr. Chauhan conducted original research at St Thomas’ into the interpretation of Optical Coherence Tomography (OCT) images of the retina; this was the first OCT machine in Europe and he presented the research in the UK, France, Switzerland, the USA and Australia.

Dr. Chauhan was awarded an MD by the University of London in 2001. His senior ophthalmology training was at Moorfields Eye Hospital and he went on to undertake three further years of retinal training, with a year each at the Royal Victorian Eye and Ear, Bristol Eye and Moorfields Eye Hospitals, before working as a consultant in vitreoretinal surgery at the Birmingham and Midland Eye Centre in Birmingham, UK.

Dr. Chauhan is a member of the Oceania Retinal Association and European Society of Retina Specialists. He is currently involved in teaching vitreoretinal surgery to local eye surgeons in Myanmar, as part of a world’s first such program. He practises in Melbourne Vision Eye Institute.