Connect with:
HomemieventsO, What a Feeling!
mievents
author: Melanie Kell

O, What a Feeling! 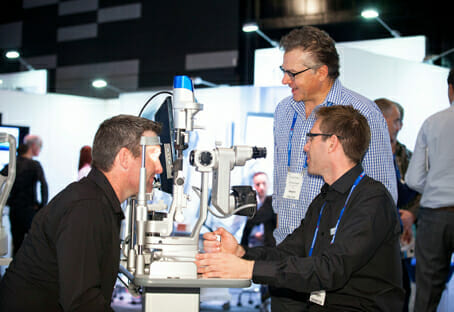 The inaugural O-Show, hosted by ODMA took place in Melbourne’s reborn suburb of Docklands in mid-May, attracting serious buyers to review the latest in optical frames, sunglasses, lenses and equipment.

There was not a CPD point in sight at O-Show, but that didn’t stop 700 eye health professionals from around Australia and New Zealand from making their way to Melbourne for the weekend of 21–22 May for the Optical Distributors and Manufacturers Association’s all new and shiny show.

Finola Carey CEO of ODMA said O-Show was a great success, “Our exhibitors and visitors all left happy and our new organiser IEC’s Marie Kinsella, was incredibly professional, helping us to deliver a pop up event in just eight weeks.”

Hosted at Peninsula, an intimate function centre on a Dockland’s pier, the blacked-out room, with elegant lighting beautifully highlighted vivid colours and textures of frames from the likes of Leona Edmiston, Mad in Italy, Clic, Carter Bond and the all Australian, Clive & Wally.

Despite being a smaller space than traditional exhibition arenas, there was also ample room for the 34 equipment suppliers, including Device Technologies, Medmont, BOC and Designs for Vision, to demonstrate their wares.

Will Robertson from Designs for Vision said he was “blown away” by the success of O-Show. “When O-Show was first discussed we knew it was a risk but we decided to take it and I’m glad we did – clearly the optometry profession wants buying opportunities like this. We had customers on our stand right through the weekend and there were stages when we were so busy that we could have done with more staff. We sold to customers from right across the country and I know there will be more sales to come through follow-up,” he said.

John Nicola from Optique Line said O-Show presented an opportunity for his company’s account managers to meet face-to-face with customers.

“I loved O-Show. The great thing was that I was able to get people’s attention the whole day. They weren’t running off to lectures – a day and a half is manageable and it’s more than enough time to see everyone and look after them. Hopefully, from a long-term perspective this is something we can maintain in Melbourne. It’s such a vibrant hub. We should be able to run exhibitions like this here and in Sydney, year in and out.”

Helen Najar from Clic said the thing she liked about O-Show was its boutique nature and the business development opportunity it presented. “I don’t have representation down here so it was a good opportunity to come to Melbourne and invite my customers to come… I’m very impressed with the quality of buyers who have come through – people I’ve not seen at the Sydney or Brisbane shows – there were many potential new buyers for me.”

Having just launched the B+D brand (of Danish origins) Bplusd to the local market, Ms. Najar said O-Show couldn’t have come at a better time. “B+D is a top end premium reader (in 0 to +3 powers) that’s also Rx-able. There is a lovely quirkiness about them, they are packaged and presented really beautifully and so they have attracted great interest here.” Ms. Najar said her team had “barely stopped” during their time at O-Show.

Optical dispenser Dean Harborne was at O-Show to review equipment for the Melbourne practice he recently bought with his wife Felicity. “We’re looking at everything as we’ve only recently bought the practice, but primarily equipment as we’ll be upgrading our consulting rooms and edging equipment – we’re one of the few practices left that does edging in-store,” said Mr. Harborne.

Nicole De Souza from Melville Optical, in Bicton, Western Australia was at O-Show to assess the clinical equipment of three specific suppliers. “I came across because we are looking at re-locating our practice to bigger premises and we’re looking for equipment for the consulting room. In Perth we don’t get access to all the equipment suppliers so this is what we need to do.”

Ian Brigden from Eyecare Plus in Nelson Bay on the NSW north coast said he’d come to O-Show to look at both frames and equipment. “At SRC there weren’t that many instruments on display. I wish there were a few more frame companies here, however there are some smaller, interesting brands and it’s not crowded, which is good. I think this might take off.”

“ODMA Fair is huge and in the past, there have been people everywhere and a lot of pressure to buy frames. Yet the original idea of ODMA was you’d go and look at things then ask the rep to come up to your practice, and that’s what this has felt like today.”

Susan Walton from Special Eyes Optometry in Newcastle said she’d been attracted by the concept of a smaller more relaxed show, which was not as daunting as ODMA. Noting that O-Show looked to be a less expensive option for exhibitors, she commented that “this presentation is perfectly acceptable, it doesn’t need to be super spiffy”. Additionally, she said O-Show gave her a great reason to visit Melbourne. “We like coming to Melbourne, so we’ve stayed for the weekend, we’ll catch up with people for dinner, wander through again tomorrow. But there’s no pressure.”

A host of presentations on a central stage area, along with product demonstrations on exhibitor stands and regular ‘live’ window dressing demonstrations gave visitors to O-Show a chance to learn something new. Top of the attractions was Mark Davis, an expert in sales and customer management who attracted strong audiences to his Saturday afternoon presentations, particularly one delivered on first class customer service. Also on the speaker line-up were Robert Springer from OptomEdge and Paul Hillier from Clarity 2020. Product demonstrations were delivered from a number of suppliers including Designs for Vision, Heidelberg Engineering, BOQ and Black Lilly.