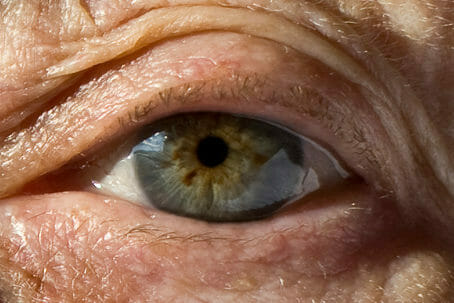 Age-related macular degeneration is the most common cause of irreversible visual loss in developed countries.1 We review the Fight Retinal Blindness! findings from our large observational data on the real-world effectiveness and safety of anti-vascular endothelial growth factor treatment.

Vascular endothelial growth factor (VEGF) is upregulated in neovascular age-related macular degeneration (nAMD), and is an endothelial cell-specific mitogen that promotes vascular permeability and retinal neovascularisation. The management of nAMD was revolutionised with the development of anti-VEGF agents, which include ranibizumab (Lucentis, Genentech Inc.), bevacizumab (Avastin, Genentech Inc.), and aflibercept (Eylea, Regeneron Pharmaceuticals, Inc.).2,3 Anti-VEGF therapy is effective in preserving vision in the majority of patients with nAMD.3-9

The Fight Retinal Blindness! (FRB) Project has established an international prospective audit system that can track anonymously the outcomes of nAMD treated with anti-VEGF agents in routine clinical practice. This has allowed us to analyse long-term outcomes of anti-VEGF therapy in large numbers of patients, and identify important potentially modifiable variables like the effect of different treatment patterns on visual outcomes.10-16

The FRB system collects data when eyes start treatment and from each subsequent clinical visit, including patient demographics, visual acuity (VA), whether the eye had received prior treatment for nAMD, lesion type, activity of the choroidal neovascular membrane that is invading the subretinal space and what is being treated, the type of treatment given and ocular adverse events. Data has been collected from 31 clinical practices located in Australia, New Zealand, and Switzerland since January 2007.17

The benefit of data from observational studies, compared to clinical trials, is that they provide an indication of what is occurring in routine clinical practice. Although clinical trials determine whether a treatment is effective under ideal and standardised conditions, observational studies from the FRB registry have allowed us to test whether a treatment actually works in real-world clinical practice.18

Results of the FRB Project

We analysed outcomes of 1,212 eyes that commenced anti-VEGF therapy five or more years previously. Mean VA improved after six months and remained above the mean presenting VA for approximately six years (Figure 1). After seven years, over 40 per cent of eyes still had driving vision. This was better than the 23 per cent of eyes reported by a North American study which was, until then, the only study of seven-year outcomes.19 Treatment was discontinued for 663 eyes (53 per cent) within the first five years. Despite initial gains in vision, the mean VA of these eyes had deteriorated to baseline or worse around the time treatment was discontinued. The rate of serious adverse events was low.10,11 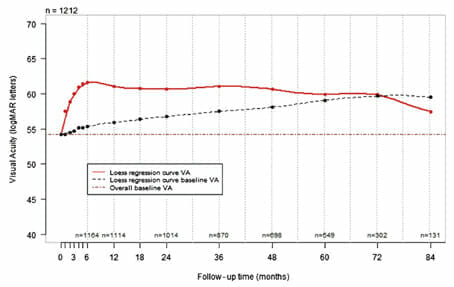 Figure 1. Mean visual acuity (VA) for all 1,212 eyes over time. At each time, the number of eyes still being followed is shown above the horizontal axis. The black dashed line represents the mean baseline VA for those eyes still observed at the marked time points, which improved over time.

These results may be better than the previous report because more injections were given to our patients, possibly related to a greater incentive for the ophthalmologist to treat in Australia. Future studies to determine how to increase the proportion of eyes that maintain the initial VA gains of anti-VEGF are warranted.

We have demonstrated that visual outcomes achieved in a clinical trial can be achieved in real-world clinical practice with a modified treatment regimen. Outcomes of clinical trials may be considered to be unachievable in cohorts from routine practice because patients that participate in clinical trials tend to be healthier and they are selected to enrich those who have the potential for improved vision after starting treatment.

We tested whether outcomes of patients selected from an observational study cohort with occult and minimally classic choroidal neovascularisation (CNV) receiving anti-VEGF therapy were similar to those of the landmark clinical trial MARINA.4 The patient groups from the observational study were closely matched with those of MARINA.

Eight hundred and twenty-one anti-VEGF-naïve eyes treated with ranibizumab with at least 12 months of follow-up was included in the total FRB (FRB-All) cohort, while a subset of this cohort of 401 eyes who were matched to the MARINA treatment group was included as the FRB-MARINA cohort. Mean VA improvement after 12 months in FRB-MARINA was similar to that of the 0.5mg group from MARINA. Improvement in FRB-ALL was slightly less. The mean treatment effect compared with the MARINA control group, who were placebo-treated, was similar for the MARINA treated group and the FRB-MARINA cohort (Figure 2).18 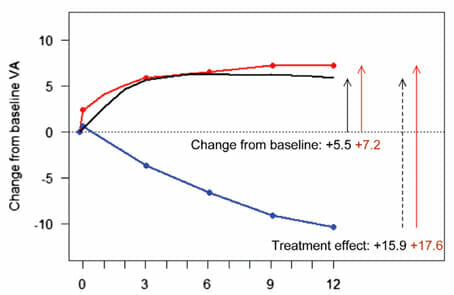 Figure 2. Graph showing the 12-month outcomes from the MARINA 0.5mg ranibizumab group (red) and the matched Fight Retinal Blindness! (FRB)-MARINA cohort (black). The dashed arrow indicates an estimate of the treatment effect in the FRB-MARINA cohort using the sham injection arm (blue) from the MARINA trial.

In our study the results of the matched observational cohort were similar to those of the treated groups in MARINA, which shows what can be achieved in clinical practice using VEGF inhibitors for nAMD.

Three hundred and ninety-four eyes (197 treated with ranibizumab and 197 with aflibercept) from 372 patients who received treatment were analysed. Eyes were matched for their ‘baseline’ characteristics. The mean VA of eyes receiving either ranibizumab or aflibercept improved from baseline with no significant difference between the two agents (Figure 3). The mean numbers of injections and the adjusted proportion of eyes in which the CNV lesion was graded as inactive during the study were also similar between the two groups.15

While we found no differences in the average response to the two agents, future research on biomarkers for treatment response may identify profiles that will aid in selecting the anti-VEGF agent that will provide the best outcome in individual patients. 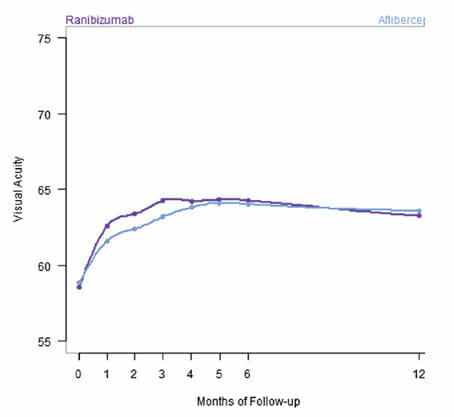 Characterisation of the induction phase of treatment

Variable dosing regimens are often implemented after an induction phase. Induction involves treating lesions more regularly, usually monthly, until there is no evidence of activity. We have characterised the length of time that lesions take to be rendered inactive, and factors that may influence this, after starting ranibizumab therapy. One thousand and ninety six eyes were studied. The median number of weeks until a lesion was graded as inactive after commencing treatment was 15 weeks. One to three injections were sufficient to inactivate the lesion in 61 per cent of eyes (Figure 4). Twelve per cent of the 1,096 observed eyes took more than 12 months to eventually become inactive.20 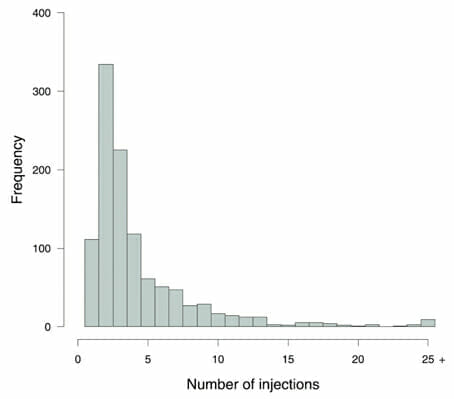 Figure 4. Number of injections received per eye before choroidal neovascularisation was first graded as inactive.

This information is useful in predicting a patient’s response to therapy and formulating individualised treatment regimens. Future research is needed to investigate the time until lesion inactivation occurs in nAMD with other anti-VEGF agents.

Treat-and-extend is a treatment regimen consisting of induction and maintenance phases. Once the induction phase results in no evidence of lesion activity, and there is stable VA, patients receive maintenance injections at increasing intervals. Treat-and-extend aims to reduce the number of injections in less active eyes while allowing more active eyes to receive more frequent injections. Although treat-and-extend became more commonly used over time, especially in Australia, its results had never been properly evaluated in a large group of patients.

These results show that a treat-and-extend regimen can produce good outcomes with fewer visits compared to other approaches.

Of a total cohort of 1,992 patients in the FRB registry, 28 per cent had bilateral disease, which is similar to previous studies. Of this, 176 patients had first and second eyes that had been diagnosed with nAMD ≥ 2 months apart with at least 12 months of follow-up data. In this group, second affected eyes had better starting vision and better final vision after treatment. The better VA when eyes first started treatment appears to be the main reason for better outcomes after 12 months of treatment because mean VA improvement of the first affected eye group was actually significantly greater than that of the second affected group but second affected eyes still achieved better outcomes.16

It is likely that second eye involvement would be detected earlier during the regular visits required for treatment of the first affected eye. This is reflected by the better vision and smaller lesion size of second affected eyes that were observed.

Compared with randomised clinical trials, observational studies produce longer-term results, which reflect what actually happens in the real-world. Our outcomes tracking software, which is one of the first in the world, has produced a number of clinically relevant observations on the treatment of nAMD with VEGF inhibitors, particularly that good outcomes can be obtained using a treat and extend regimen in real-world clinical practice.

Professor Mark Gillies M.B.,B.S, PhD., F.R.A.N.Z.C.O. is a Sydney University Medical School Foundation Fellow and a clinician-scientist who specialises in diseases of the macula, and directs the Macular Research Group at the Save Sight Institute of the University of Sydney. The group is developing better treatments for macular diseases through clinical and laboratory research. Mark is also heavily involved in the MacTel Project, an international collaborative study to identify a cure for Macular Telangiectasia Type 2. He has published over 120 original articles in the peer-reviewed literature, mostly concerned with the treatment of macular diseases. Professor Gillies practices at Eye Associates in Sydney.

Chu Nguyen BOptom(Hon) MBBS MMed(ClinEpi) is an Ophthalmology Senior Resident Medical Officer at Westmead Hospital in Sydney. He practised as an optometrist before changing to Medicine. Along with his training, Chu is undertaking research at the University of Sydney’s Save Sight Institute with the Fight Retinal Blindness Group. His thesis is on characterisation of poor outcomes in eyes with neovascular AMD treated with anti-VEGF therapy.