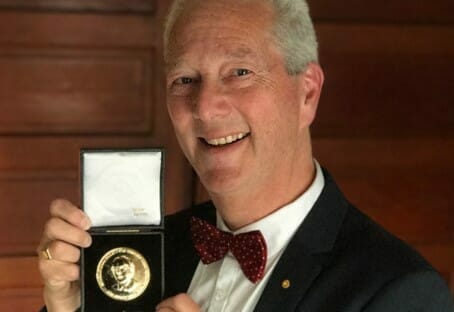 The Ruben Medal is awarded every two years by the International Society for Contact Lens Research, which is the peak international contact lens think tank. The Society is capped at 100 members, who are leaders in the field working in academia, research, clinical practice and industry.

Throughout his career, Professor Efron has undertaken extensive research in the field of contact lenses. He is an opinion leader and prolific author, having published over 900 scientific papers, clinical articles and abstracts. He has also published eight books which have appeared in a total of 16 editions and foreign translations. Professor Efron has been invited to speak at over 500 conferences in 42 countries throughout his career, and has won a number of other major international research awards and prizes.

Professor Efron told mivision, “To have received this award from academic peers working in the same area is very gratifying. The bulk of my career has been directed towards optimising the clinical application of contact lenses, and it is nice to have it reaffirmed that my work has had a positive impact in that regard”.

The Ruben Medal is named after Montague (‘Monty’) Ruben, a British ophthalmologist who pioneered the clinical application of soft and rigid contact lenses for therapeutic and cosmetic use.