On an international scale, the Cornea and Contact Lens Society of New Zealand (CCLS NZ) conference feels small with just 140 attendees. Yet it is perfectly formed and packs a punch with an extremely high calibre of international and local speakers. 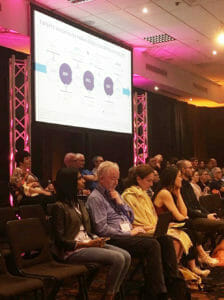 At 61, the Cornea and Contact Lens Society of New Zealand (CCLS NZ) is one of the oldest societies of its type in the world. It is also unique in that while the membership base is predominantly optometrists, it includes anterior segment ophthalmologists, researchers, and other health practitioners with a special interest in the eye. This diverse membership drives the content of the annual conference, which this year was held in Rotorua from 28 February to 2 March.

Sponsored by CooperVision, esteemed paediatric ophthalmologist Professor Ian Flitcoft, covered retinal defocus, its influence on eye growth, and the influence of time outdoors. Mark Koszek presented on scleral stiffness and asked the question “do we need to consider myopia a connective tissue disorder? Daniel Tilia, from the Brien Holden Vision Institute (BHVI), highlighted the fact that myopia currently affects 33% of the world and, because the most commonly fitted lenses are soft lenses, soft multifocal control lenses are needed. He discussed the literature around the success of off label use of centre distance ProClear multifocal, Coopervision’s MiSight, The DISC (Defocus Incorporated Soft Contact) lens available in Hong Kong, and the novel Extended Depth of Focus lens coming from BHVI. Referring to the latter, he discussed a new theory of retinal image quality and how this could drive eye growth rather than peripheral refraction. For all lens types, the more that children wear the contact lenses, the greater the efficacy.

Dr Arthur Epstein, considered one of the most influential optometrists in the world, describes dry eye care as, “the most unique opportunity to transform someone’s life”. He delivered a dry eye workshop and spoke about the benefits of omega 3, including evidence supporting the use of reesterified omega 3 for meibomian gland dysfunction. “Meibomian glands don’t work without omega 3,” he stated.

Contact lenses, DEWS II, therapeutic drugs on the horizon, demodex and steroid use in dry eye disease were also covered.

CATARACTS – IN YOUNG AND OLD

Prof Ian Flitcoft discussed infantile cataract, which forms a large part of his clinical work. He discussed operating as soon as possible, as these patients develop amblyopia due to image deprivation, as well as anisometropia and in the majority of cases, strabismus. He discussed the Aphakia Treatment Study (IATS) and IOLUnder2 Study and the differences between early IOL use and contact lenses for these patients; stating contact lenses lower rates of additional surgery and routine use of IOLs in under twos cannot be recommended. 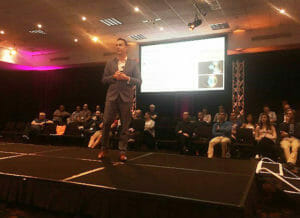 Ophthalmologist, Dr Rasha Al-Taie spoke about early detection of keratoconus and when to crosslink. Keratoconus affects one in 2,000 people in New Zealand, and is twice as common in Maori and Polynesian ethnicities, who also get it earlier and more severely. Research shows it to be 700 times more prevalent in those with Down Syndrome.

Dr Al-Taie implored delegates to encourage patients with keratoconus to bring their children in so that assessment can begin early – the earlier we refer for crosslinking the better the patient outcome. Progression is indicated by steepening of the anterior corneal surface and the posterior corneal surface, and thinning and/or an increase in the rate of corneal thickness change from the periphery to the thinnest point.

Mark Kozsek was a frequent speaker at the conference, presenting, along with Eleisha Dudson on the advantages of scleral lenses and the importance of communication to ensure success and safety with this lens modality.

He and Grant Watters spoke on orthokeratology, offering tips for new and experienced practitioners alike. Referring to his research on OrthoK and meibomian gland dysfunction, Grant encouraged delegates to treat the latter prior to, and during, OrthoK.

In a separate presentation, Mark drew on his vast clinical experience to discuss cases of microbial keratitis, herpes simplex, conjunctival intraepithelial neoplasia and posner schlossman syndrome. On diagnosing herpes simplex keratitis he said, “the further from the centre of the cornea the less dendritic it appears” and reminded us to also check the conjunctiva.

Adele Jefferies BOptom(Hons) CertOcPharm (Therapeutics) is an optometrist and the national clinical manager with Matthews Eyewear Eyecare Ltd in New Zealand. She holds positions on the CPD Accreditation Committee and Competence Review Committee for the New Zealand Optometrists and Dispensing Opticians Board, is a councillor for Cornea & Contact Lens Society (NZ) and a Clinical Masters Student at the University of Auckland.

DRUSEN: Your Mnemonic for Managing AMD