The Challenges of Orthokeratology

While easy orthokeratology (OK) is easy, difficult OK is difficult. There’s a real knack to working out which is which.

Here we are, in Victoria, in another lockdown, this time with stage four restrictions. Having been given ‘stay at home’ directives, there are not a lot of patients coming through our clinics, but there is one who comes in every day – one who baffles me at how terrible she is at managing her contact lenses – so I’ll write about her. That’s me.

In reality, patient numbers haven’t been that dire. I just wanted to write in more detail about the clinical aspects of my eyes – as to why my eyes (and not just me, the hopeless contact lens patient) are a difficult OK case, because while easy OK is easy, difficult OK is difficult and there’s a real knack in working out what is ‘easy’ and what is ‘difficult’. I first wrote about my many failures as an OK patient in my July column, however unfortunately, I couldn’t fit all the clinical aspects in. I wanted to share my experience with you because we all need a laugh, now, more than ever.

when it works, the relationships you build with your patient, the joy and freedom it allows them, make it all worthwhile 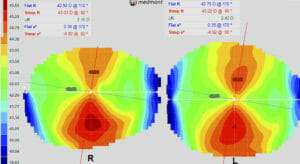 I am a challenging orthokeratology case because of my relatively higher prescription, my limbal to limbal and asymmetric astigmatism (Figure 1), my relatively low corneal eccentricity values, and my age. And that’s before you look at my personality – my complete disregard for material goods, my absentmindedness, clumsiness, type A personality and impatience – but we already covered this in July’s mipatient.

As Winston Churchill famously said, “He who fails to plan is planning to fail”. Being a successful orthokeratologist is to know your patient and to set up realistic expectations. Under-promise and over deliver, because if you over-promise and under-deliver, you will have an irate patient and/or parent, and then you will be faced with the difficult task of groveling back into their good books as well as facing potential disputes over refunds. Communication is key. Don’t promise anything but that you will do your best. Explain to the patient if and why they may fail in OK, so that if you don’t achieve consistent 6/6 perfect vision, the onus is on them – it’s their eyes, or their failings, not your lack of expertise.

In my case, the first challenge is my relatively high prescription for OK. Higher degrees of myopia to be corrected in OK will result in a smaller treatment zone and more higher order aberrations.1 This will result in visual distortion, haloes and shadows, particularly at night-time when pupil size increases. For this reason, young adults with larger pupils may not be good candidates for OK, especially if they do a lot of night-time driving. 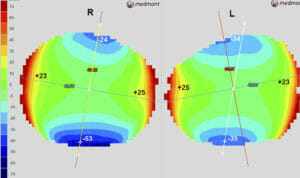 OK is a completely reversible treatment, so there will be a tendency for the cornea to return to its original shape, resulting in manifest myopia and subsequent blur. Ideally, this would occur after the lenses are due to be inserted again. Higher prescriptions tend to regress faster than lower prescriptions, so it is important to counsel the patient so they expect their vision to fluctuate early on and take up to a month to stabilise. During this period, soft contact lenses or spectacles of a lower prescription may assist. Higher prescriptions need to wear their lenses every day or they will end up in an ‘in-between’ prescription, where their vision is unclear and their spectacles are too strong. Vision can also fluctuate if the patient is a restless sleeper – tossing and turning can push the lens out of place. It will also fluctuate if they sleep for less hours than the lenses need to create their effect, compounded with longer waking hours the patient needs to see. Fortunately for me, one of my many skills is being an amazing sleeper.

Traditionally, only -4.00D of myopia and -1.50D of with-the-rule astigmatism were deemed correctible with orthokeratology,2,3 however modern-day designs have shown to correct much higher amounts of myopia in the correct patient. These are generally used off-label, with most designs only approved for up to -6.00D.4 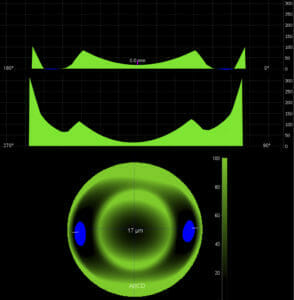 The cornea is aspheric in shape and in normal eyes, tends to be prolate – i.e. it becomes flatter in the periphery. This can be described in eccentricity (e), where the higher the rate of flattening, the greater the difference in curvature between the apex and the periphery.2 A completely spherical shape will have an e value of one; corneas with flatter peripheries have e values approaching zero. The average eccentricity is 0.47 to 0.68.4 In myopic OK, we are flattening the central cornea, so the higher the initial eccentricity, the higher the degree of myopia that can be corrected.2,3 My lower e values of R 0.30 @ 172 and -0.02 @ 82, and L 0.35 @ 170 and -0.25 @ 80 traditionally would have been difficult to treat, especially with my degree of myopia, however OK technology has improved drastically over the past decade and modern day designs are now able to correct higher prescriptions on corneas with lower eccentricities such as mine.

Astigmatism also presents a challenge for OK – firstly, prescribing spherical lenses on an astigmatic cornea can result in lens decentration and a subsequent treatment zone which is not centred over the pupil, resulting in reduced visual acuity, induced irregular astigmatism, shadows and haloes.5 Astigmatism can also result in incomplete treatment. There is often the misconception that OK works by mechanically pushing the cornea flatter. However, the effect is created by ‘squeeze film forces’, i.e. the fluid forces created beneath the lens. When correcting for myopia, the lens has a curve which is relatively flatter through the centre compared to the apex of the cornea, and relatively steeper in the mid periphery. This creates a positive fluid force ‘push’ which flattens the central cornea, and a negative fluid force ‘pull’ which steepens the mid peripheral cornea, creating the ‘red ring’ of treatment we see in OK.2-4

If there is not a 360o equal alignment or ‘seal’ between the lens and the cornea, fluid forces can escape along the steepest meridian, resulting in uncorrected astigmatism, incomplete treatment and even induced astigmatism. 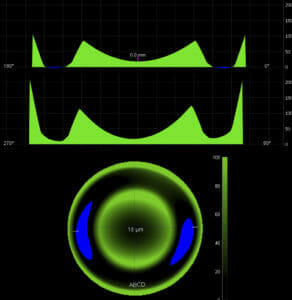 Spherical, or rotationally symmetrical OK lenses have been reported to be able to correct approximately half of the astigmatism in with-the-rule astigmatism up to 1.75D, provided the astigmatism is central and not limbal to limbal.5 However, with against-therule and oblique astigmatism, lower degrees of astigmatism can be correctable.

However, the amount of astigmatism in dioptres is less useful than looking at the cornea in terms of elevation. Elevation describes the height from the apex, and is noted by creating a reference ‘best fit sphere’ (BFS) and describing corneal points as heights relative to this BFS. Negative values are below the best fit sphere and positive values are above. OK lens designs typically land at the 8.0mm chord, or 4.0mm from the centre, so we look at the height differential from the steeper and flatter meridians at the 8mm chord. It is recommended that toric designs are considered when the height difference between the two principal meridians is greater than 30 microns. To visualise this, we could look at the relationship between the contact lens and the steep corneal axis and the flat corneal axis as two separate lenses. If we align the flat axis, we will have a lens which seals well along the flat axis, however the same lens would be far too loose along the steep axis, resulting in an incomplete seal. 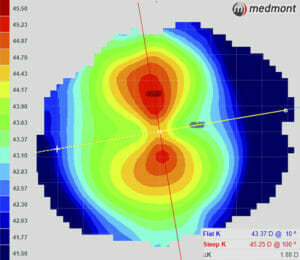 If we were to simulate a lens on eye using EyeSpace software, we would see that a spherical lens on my eye would result in good alignment along the flatter axis, however, an excessively flat alignment along my steeper axis (Figure 3). This would result in an incomplete seal along the steeper axis and hence incomplete treatment. However, if we were to simulate a lens with a toric reverse curve and alignment curve, we would see the alignment would be far more even around 360o of the lens (Figure 4). This would result in much less loss of the squeeze film forces and hopefully complete treatment (which it did).

Figure 5 demonstrates why the type of astigmatism (i.e. central vs limbal to limbal) is important. The cornea has central astigmatism with similar amounts of astigmatism and only 29 microns of difference in elevation between the steep and flat meridians (Figure 6). If we simulate a spherical OK lens on this cornea, the alignment is much more circumferentially even (Figure 7) and a spherical lens may very well work on this cornea. 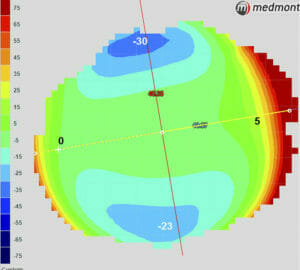 It’s been a fun and frustrating experience wearing OK. I have to admit I’ve lost another lens since July’s mivision was published, but I’m getting there. I now have complete sympathy and empathy for my patients, and I’m horrified at how bad I am. Despite my failings, I am highly motivated as it’s so wonderful to be able to see with nothing in.

A friend read my July article and asked why I haven’t had refractive surgery. While I know many patients and friends who say refractive surgery “changed their lives”, and I do believe the risks and side effects are low, I also see the unhappy people. People refer me the ectasias, the ones with higher order aberrations, the dry eye patients. These are people who elected to have surgery that made them worse off than they are, and they are discontent, and often really angry. Surgery is permanent – we can’t simply go back if it doesn’t work – but with OK, we can… though if you end up breaking as many lenses as I do, it’s not only more involved, but also more expensive than surgery in the long run. 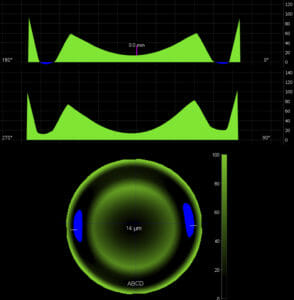 So, in summary, there are many nuances with OK – factors that can make for successful or unsuccessful treatment. It’s not just about having the ideal patient – i.e. the right corneas, motivation and personality. Understanding the nuances, setting realistic expectations, and providing appropriate guidance is key to being a successful orthokeratologist.

So, who wants to be my optometrist?

Solutions for Our Changing Visual Behaviour

Life Begins at 40… and then it Just Gets Better