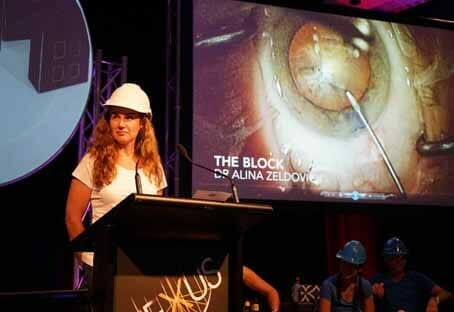 AUSCRS 2015, held early October, has been hailed as the “biggest and most balanced ever” in terms of its high quality educational program presented in a highly entertaining format that encouraged audience participation and robust and respectable debate

The traditionally casual meeting attracted over a hundred cataract and refractive surgeons from around Australia and New Zealand. As is always the case, the conference was held in a nice part of Australia. This year it was in the Queensland Sunshine Coastal town of Noosa.

Dr. Bob Cionni…highlighted that advances in ring and segment implants gave surgeons greater ability to manage eyes with weak zonules as in cases of PXF or following blunt trauma…

AUSCRS 2015 opened with the Gold Medal Lecture by a world-renowned expert in the field of cataract surgery, Dr. Bob Cionni. His topic was ‘Compromised Zonules Management’. He is the inventor of the renowned Cionni Ring device used in cataract surgery in the presence of weak zonules. The ring is implanted to stabilise the IOL/bag complex.

He highlighted that advances in ring and segment implants gave surgeons greater ability to manage eyes with weak zonules as in cases of PXF or following blunt trauma. Properly used, these devices even allowed for such refinement as astigmatism management.

Dr. Roberto Bellucci presented on the topic of presbyopic LASIK. He has had years of experience with multifocal ablations using the Technolas Supracor system. Dr. Bellucci felt that this is a promising technique. He said a central near ‘add’ with a small optic zone was the preferred pattern to use. He said angle kappa and the pupil centre have to be considered in every individual for correct centration.

Dr. David Kent presented his outcomes following small aperture corneal inlay implantation for presbyopia. He said that the KAMRA inlay in a corneal pocket, either primary or after LASIK, is superior to placing the inlay under a full LASIK flap. The target should be a small degree of myopia. The KAMRA, he felt, improves functional unaided and distance acuity, maintains best corrected acuity, reduces dependency on reading glasses and results in high patient satisfaction.

The Physiol FineVision trifocal IOL received a lot of attention at the meeting. Dr. Gilles Lesieur discussed the quality of vision with it in photopic and mesopic conditions reporting good outcomes with good distance, intermediate and near visual acuity. Despite the apodisation of the diffractive rings, the intermediate and near visual acuity with larger pupils is maintained. His fondness for the lens was echoed in the presentation by Dr. Uday Bhatt from Melbourne who has implanted more of these IOLs than anyone else in the world.

Dr. Bellucci also presented his experience with an Italian extended depth of focus apodised IOL. He said it lengthened the depth of field with few aberrations and leading to high patient satisfaction.

On the second day of the meeting Drs. Rick Wolfe, Uday Bhatt, Michael Lawless and Peter Ring got up on stage dressed in Sumo Wrestler costumes in a session called ‘Head to Head”. Such is the format of AUSCRS meetings! They explained why they favour using a particular multifocal IOL. The interchange was intended to be frank, robust and entertaining. That it was!

Keratoconus and Ectasia after Refractive Surgery

Dr Grant Snibson from Melbourne spoke on the topic of combining collagen cross-linking (CXL) with LASIK. This has been called ‘Lasik Xtra’. But does it offer anything extra? CXL is capable of stiffening the keratoconic cornea and has been proven as an effective treatment for ectatic disease. It is likely that CXL also increases the rigidity of the normal cornea in vivo. However, not all protocols have the same efficacy and risk and each should be validated and published.

The fact is that the risk of ectasia is low if risk factors and treatment limitations are respected. There is no clinical evidence that LASIK Xtra will prevent ectasia. There is no published evidence to support the current recommended protocol but there is some evidence of minor medium-term improvement in visual outcomes in high myopia. The procedure is being driven by marketing with rapid uptake despite a weak evidence base.

On another day Dr. Daya Sharma and Dr. Hamish McKee debated whether patients with keratoconus should have excimer laser PRK combined with corneal collagen cross linking. Consensus was not reached. The argument ‘for’ is that it is relatively uninvasive and improves vision and should reduce the need for corneal transplantation. It is not a refractive treatment as much as a method for de-bulking irregular astigmatism. On the other hand, corneal rings may achieve better visual outcomes and do not thin corneas further.

Dr. Abi Tenen reported that 156 optometrists in Melbourne were recently surveyed by her practice. 72.4 per cent worked in a metropolitan setting. 74.4 per cent did not have a corneal topographer. She felt that this led to an under diagnosis of keratoconus. She suggested that ophthalmologists reach out to optometrists and allow them access to our topographers for their patients.

Whereas when Dr. Eric D. Donnenfeld presented his work with FLACS the positives of the technique came out much more. He highlighted the advantages as being the computer controlled and laser accurate self-sealing incisions, intrastromal arcuate incisions and precise capsulotomies. He noted that with FLACS there is reduced phacoemulsification time and energy. The precision of the capsulotomies paved the way for the introduction of new IOL designs which incorporate the capsular bag into the rim of the IOL.

In a session titled ‘Phaco vs Femto: Fact or Fiction?’, Dr. Donnenfeld highlighted that femtosecond laser arcuate incisions are adjustable and titratable. The full effect of the incision is not achieved until the incision is manually opened, either intraoperatively or postoperatively. The main incisions are self-sealing and can be fashioned in a reverse cut fashion making it easier to easier access to sub-incisional cortex

Dr. Donnenfeld said that most ophthalmologists do not perform astigmatic incisions. The femtosecond laser provides an opportunity for all cataract surgeons to be able to do so.

Dr. Roberto Bellucci also extolled the virtues of FLACS. He said there is likely to be better long-term IOL stability due to a perfectly round capsulotomy and less zonular damage. He liked the absolute control over the fashioning of corneal wounds. Improved astigmatism control with more accurate arcuate incisions was possible with FLACS.

Dr. Brendan Vote from Tasmania presented a comparison of FLACS versus conventional cataract surgery in patients undergoing toric IOL implantation. He concluded that FLACS does not result in better visual outcomes in patients when compared with standard phacoemulsification. Having embraced FLACS wholeheartedly initially, does he still perform FLACS? ‘Not much,’ he said. Only in those cases with endothelial compromise, very dense nuclear sclerosis or zonular compromise. In these situations he feels the laser technique is superior to conventional phacoemulsification.

Dr Lewis Levitz has had an interest in the condition of cystoid macular oedema for many years. In his experience, FLACS does not appear to increase risk of the condition (as has been suggested) and its incidence is probably around 1.2 per cent no matter which technique is used.

Dr. Bob Cionni presented his experience with ORA Intraoperative aberrometry which he said represents a means to refine refractive outcomes in cataract surgery. His own refractive outcomes in monofocal, toric, multifocal and post refractive cases are superior using ORA. ‘Intraoperative aberrometry will help us meet our patient expectations resulting in happier patients and happier surgeons’. He is a consultant for the manufacturer of the device.

Dan Black compared two methods of toric IOL alignment: the Zeiss Callisto system and traditional marking. He felt the Callisto was superior, improving predictability to >99 per cent. For best results the posterior corneal curvature measurements really should be taken into account.

This issue was also examined by Dr. Michael Goggin who is well known for his interest in astigmatism. He looked at the outcomes of an adjustment to IOL selection incorporating the likely effect of posterior corneal curvature. He concluded that the median remaining refractive cylinder in eyes receiving toric IOLs with an adjustment for posterior corneal astigmatism was 0.25D versus 0.51D (p<0.001) in controls. This reduction of 50 per cent is both statistically and clinically significant.

Contrast sensitivity was consistent with reported normal values for eyes a decade younger. He distinguished between “disability glare” (which is measurable) and “discomfort glare” as a post-operative symptom in trifocal IOLs. The consistent complaint of glare in a minority of trifocal patients may be due to a neurological susceptibility in these patients.

On the last day of the conference Patrick Versace presented an account of the evolution of presbyopia treatment using corneal inlay presenting the pros and cons of each of the three inlays available in Australia: Raindrop, Presbia and Kamra Inlays. None are without problems.

Dr. Ravi Singh presented his experience with simultaneous KAMRA implantation and LASIK concluding that there is a significant improvement in near vision with no serious complications. Case selection was important and patient preparation was necessary with prolonged chair time. Centration of the inlay is important. They are not without some adverse effect on contract sensitivity.

The annual AUSCRS meeting is a popular event with Australian surgeons. Are there any advantages to the Australian meeting over European and American meetings? Most would agree… yes! Graham Barrett and Rick Wolfe, the organisers of the event, manage to coordinate a meeting in which people are free to express their impressions and experiences without the absolute prerequisite of formal scientific studies. They can voice their gut-feelings and find out what their peers are thinking too. Many ideas are exchanged in between sessions, over a coffee or, better still, beverages more conducive to a free exchange of ideas. Quite possibly, there is no other meeting dedicated to cataract and refractive surgery like it.

Dr. Con Moshegov trained in Sydney and spent two years undergoing an advanced Fellowship in cornea, external diseases and refractive surgery in the UK. He is the director of the Macquarie Street Eye Laser Centre and specialises in refractive and cataract surgery.